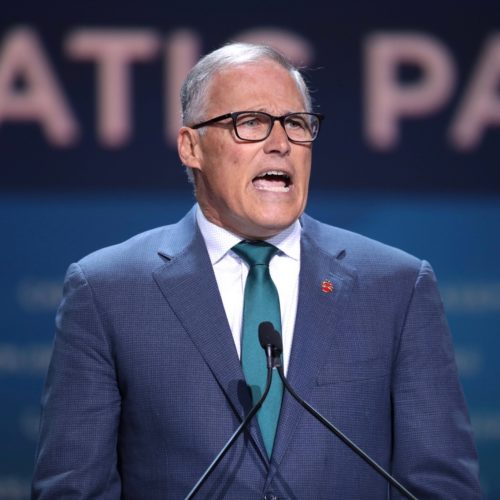 In the foggy, rainy land of Bigfoot, evergreen trees and meandering mountain passes lives a governor who thinks himself to be a king. His name, known across the land, is Jay Inslee.

King Inslee has come up some grand thoughts in his great and wondrous land of the Pacific Northwest whilst sitting in his Olympia palace. He loves the whales of the Puget Sound. He loves our climate. He loves to tell Washingtonians to “mask up, vaxx up and save lives”. He even loves the green, smelly plants and all the forms of these green, smelly plants, that are sold on what seems to be like every corner of our neighborhoods, (Except for Mercer Island and other neighborhoods of the wealthy Democrat voters where they go to the “poor side of town” for their green, smelly plants). But one thing King Inslee hates is a liar.

In fact, King Inslee wants to shut liars down. Well, except for himself, of course.

How does Inslee plan to do this? To make lying a “crime” in “certain circumstances”. That is, “for “elected officials or candidates for office who lie about election results.”

It should not be legal in the state of Washington for elected officials or candidates for office to willfully lie about these election results.”-Jay Inslee

The King has spoken! And he said so on January 6th-a year after the tragic Capitol Riots that his cronies likened to Pearl Harbor, 9/11 and the Holocaust. All one, big, fat lie. King Inslee wants officials punished. In fact, there ought to be a law!

The defeated president and his allies, including some legislators in Washington state, are perpetuating the belief that this election was stolen from them. What do you think is going to happen if you perpetuate that belief? Of course violence can be happening as a result of that.”-Jay Inslee

According to the Washington State Legislature, gross misdemeanor convictions can carry a maximum 364-day sentence in county jail and a fine worth as much as $5,000. The King claimed the “finishing touches” were being put on a draft of the bill and that his office was talking to lawmakers about sponsoring it.

Many people in the affluent parts of the magical land of never-ending evergreens love this king who stands for “truth” and “science”, who wants to save the whales and who wants the people of the world to come to Washington because of “good weed”. He doesn’t want to kill grandma. “Yes, oh yes,” they nod in unison in their KN95 double face masks while in line at Walgreens for their booster shots. “Those ‘conspiracy theorists’ who are lawmakers who went to a ‘super-spreader’ in South Dakota with MyPillow’s Mike Lindell should be locked up! Throw away the key, Jay!

As the tale unfolds, this King of Rotten Apples is not very astute, is he? Let us unpack the “lies” in which he refers to as punishable by law. First, they only apply to any faction of the population who does not agree with said Democrat Governor of three terms. This “law” will certainly not apply to corrupt state politicians, city mayors, city council members or anyone who takes office in the capacity of a liberal Democrat because they never lie. And if they do lie, it’s for “the good” of the people! The posturing here is palpable. I mean, this is just, plain dumb.

For instance, King Inslee has not called into question his own elections that kept him in the Governor’s Mansion for three terms. Remember Dino Rossi in 2004 and how the GOP claimed Inslee and the Democrats “stole” the election? This, in Inslee’s eyes, would be punishable by law. A Seattle City Council member, known for her shady financial dealings by the name of Kshama Sawant who incited violence by storming a police precinct and starting a “summer of love” ? Not a liar. Not punishable by law. Deception on ballot measures given to voters by state and government agencies such as Sound Transit? Not lies. Nothing to see here. “Two weeks to slow the spread” and until the students are back in the classroom in the state of Washington? Not lies. No consequences for elected officials here, either.

Jay Inslee can posture all he wants but the people of Washington State smell the stench of more than just the “great” wacky weed. We have been wading through King Inslee and His Court’s sludge of poor policy and leadership and it’s only getting worse. Rampant vandalism and lack of staffing at Rest Areas. Roads closed because of lack of maintenance workers and other crumbling infrastructure. Sub-par education for our kids leading to depression, violence in our schools and suicides. Vaccine and mask mandates that have shuttered businesses and killed dreams. Political rhetoric and division that has torn apart even the closest of families. For crying out loud, I cannot even watch my athlete compete today because of fear of OMICRON spread in King County but the Seattle and King County Health Department can (and does) encourage drug addicts to carry Narcan, to use clean needles “together” and “watch and wait” with one another between hits. Anybody who knows an addict knows that clean needles are a LIE. The only truth in recovery is getting an addict clean. But in King Inslee’s state, addicts can have a party and hang out together…while parents are not allowed to watch their kids’ high school sporting events.

This is Washington State. Jay Inslee is an insufferable clown. Even Bigfoot wants to leave. No lie. That’s the truth.