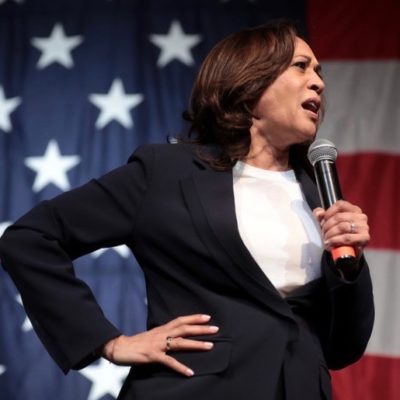 Space, the final frontier. Kamala Harris has been granted another job in addition to her handling of the border crisis. Even though she won’t venture to the border, Kamala is going to get us to Mars, apparently. Over the weekend, it was announced she will chair the National Space Council.

The New York Post calls it another “task to the veep’s portfolio“.

And will now die at the hands of VP Kamala Harris. Seems the portfolio is bulging because the work is piling up. It happens when you continue to put off pressing matters at hand. Or matters at hand in general. As of April 23, Kamala Harris has not yet visited the border, despite being named by President Joe Biden the key individual responsible for handling the crisis. In fact, VP Kamala has voiced that she had no intention of visiting the border to assess the situation. How ludicrous of one to think she would actually do such a thing! (Insert cackle here.)

But here is something Kamala could sink her teeth into (cough). Kamala can also add climate change, STEM education, and diversity in the space workforce to the group’s agenda, the White House told Politico.

Harris will put her own ‘stamp’ of priorities on the cabinet-level body that coordinates national security priorities, civilian exploration and the growing private economy of space, including ‘supporting sustainable development of commercial space activity, advancing peaceful norms and responsible behaviors in space, achieving peaceful exploration objectives with our allies and partners,’ an official said.”-Eugene Daniels and Bryan Bender, Politico

If nothing else, this is something VP Harris is slightly more enthusiastic about, we’d say:

As I've said before: In America, when we shoot for the moon, we plant our flag on it. I am honored to lead our National Space Council.

Planting the flag, on the moon or Mars, Kamala? Isn’t that deemed as colonization? Isn’t that something your party thinks others deserve reparations for? Isn’t that what your party thinks is wrong with this entire country? Oh, yes. We got it. The Martians won’t care if we plop an American flag on Martian soil, right? Put a flag on Mars, put a pin in the border crisis. Roger that, Madame Vice President.

We live in a capitalistic society. Let's let @elonmusk take care of unnecessary stuff like this and you just focus on helping your people, ok?

Pfft, Elon. Cheapskate that he is! Kamala Harris will also swear in former Florida Democratic Sen. Bill Nelson to his new post as the 14th administrator of NASA on Monday. Nelson was confirmed by the Senate unanimously on Thursday. And while Kamala boasts about planting flags on distant planets, Biden is still complaining about a “God-awful mess” at the border that he and Harris inherited from the Trump Administration. The “God-awful” mess that Kamala has yet to lay eyes on first-hand. The “God-awful” mess the veep just does not see as a priority.

Don’t worry, Kamala’s superhero book is not in welcome packs for migrant children. In fact, Kamala’s name is not attached to anything at all regarding these migrant children. The fact-checkers said so. We should believe the fact-checkers, of course. After all, why would the VP or the current administration be so callous as to assume these kids want a BOOK authored by the current VP of the United States? Shoot, she can’t even show up in person! And, I mean, it’s not like Joe Biden tasked her with handling this crisis or anything. Handling this crisis? Not prestigious enough for Kamala-it’s a “God-awful” mess. But handling the National Space Council? Now THAT’S something Kamala can attach her name to.

Reports from left-leaning outlets (that is, most of our news media) are indicating that Harris is working diligently behind the scenes on policies to remedy the border crisis. (Yeah, right.) But Harris can also throw money at the problem she does not want to see. Take the $310 million in humanitarian aid to Central America that was promised to for humanitarian relief and to address food insecurity. Throwing copious amounts of cash at “food insecurity” is not going to remedy the problem of gang violence and other crimes.

Do we really think “putting a flag on it” is going to improve relations between Americans currently and our relations with other countries? But, oh, science. Because smart people believe there is more intelligent life out there. Judging from who is in office right now, I’d say they’re right. But they’re the “party of science” and therefore, the party of space. Perhaps this is not too far off. Space is exactly what Joe and Kamala are taking up in The White House right now. Beam us up, Scotty!