Previous post
Feminists Now Dictating How Your Children Should Be Educated

Joy Behar, Idiot Extraordinaire: “Maybe he’d rather talk to me than Netanyahu. Ever think of that?”

Next post
Outrageous: Obama Knew Al Qaeda Was Behind the Libya Attack and Lied About It

Joy Behar, Idiot Extraordinaire: “Maybe he’d rather talk to me than Netanyahu. Ever think of that?” 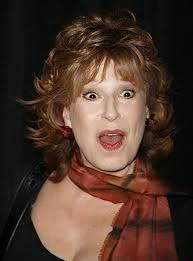 Joy Behar doesn’t like all the criticism President Obama has received for going on The View while refusing to meet with any world leaders at the United Nations meeting in New York City this week.

“Obama is being bashed for doing the View instead of meeting world leaders,” Behar, a co-host of The View and outspoken liberal comedian, tweeted. “Maybe he’d rather talk to me than Netanyahu. Ever think of that?” She also tweeted a photo from Obama’s appearance on the show, which she described as a “lovefest.”

Yes, Joy. He would rather talk to you than Netanyahu. And that’s the problem.

Since Behar is too busy on her knees for Obama to get it, here’s the thing: Obama is the president. He is not the celebrity-in-chief, he’s the Commander-in-Chief. His job is to act as the leader of the most powerful country in the world, not rub elbows with celebrities. There is no excuse whatsoever for him to blow off the leader of our closest ally in the Middle East, as well as the only functioning democracy. His job is to see leaders like Netanyahu and, you know, govern.

If he doesn’t want to do that, then he shouldn’t be the president. But thanks, Joy, for pointing out the obvious: Obama’s more concerned with hanging out with C-List celebrities than he is with actually doing his job. We’ll make sure voters know that, too.