Yes, you read that correctly. No, those were not my words, but they’re the title of a column by National Review writer, attorney, and Operation Iraqi Freedom veteran David French. He wrote:

“I’m far more hateful than Pamela Geller. In fact, I’d argue there’s no way that she could hate jihad more than I do. I’ve seen jihad up-close, in an Iraqi province where jihadists raped women to shame them into becoming suicide bombers, where they put bombs in little boys’ backpacks then remotely detonated them at family gatherings, where they beheaded innocent civilians while cheering wildly like they were at a soccer match, and where they shot babies in the face to “send a message” to their parents. I’ve seen the despair in the eyes of the innocent victims of jihad, and — believe me — that despair is infinitely greater than the alleged “anguish” caused by a few cartoons.”

And now a United Nations official has issued horrific reports of ISIS marrying off captive girls as many as 20 times while also forcing them to endure virginity restoration surgeries. 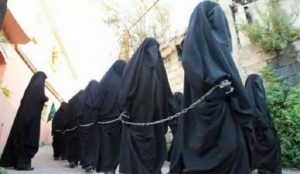 Fox News Channel host and attorney Megyn Kelly — bless her! — would have nothing to do with O’Reilly’s limiting of free speech, asking, “You know what else the jihadis don’t like? They hate Jews. Should we get rid of all Jews?”

But while O’Reilly and most of the media are fretting over insulting jihadis who will hate us anyway, the FBI may be in a tizzy over the nation’s security in the wake of the Garland incident.

Steven Hayward at Powerline noted an ABC News article claiming a ‘crisis’ and ‘panic’ at the FBI “because the agency and the rest of the nation’s homeland security infrastructure are not built to deal with the non-stop flow of homegrown extremists and possible threats that mark the current environment within the U.S.”

And, US military bases have just raised their threat levels in response to increased activity of ISIS.

Here’s some ideas:  Why don’t we close those southern borders? Furthermore, why in the world would we even consider taking in refugees from Syria, with some 2000 due into the US by fall of 2015? Is anyone even vetting these people?

Pamela Geller’s cartoon event in Texas has made two compelling points: the first, that our freedom of speech can never be abridged if we wish to live as free Americans. The second is a stark reminder that we still indeed live in a post-9/11 world, and that there are those who would destroy us, no matter how ‘respectful’ we are to them. We need to cherish our freedom to speak out, and zealously protect our security.