Next post
No Excuse For Milley No Matter Who Was President 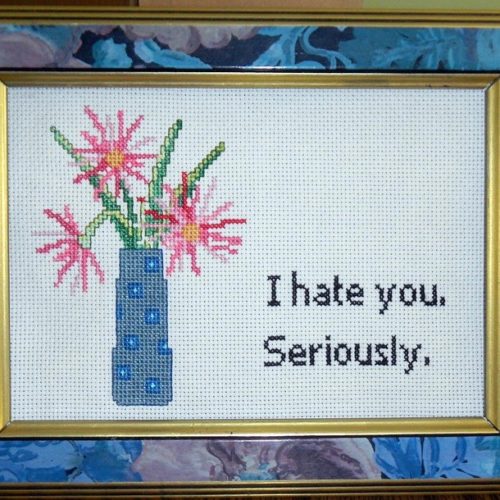 Many of us try not to go living our lives full of hate. We believe in loving our neighbor and The Golden Rule. This commentary from Derek Hunter may cause you to think again.

We’ve all seen those obnoxious “In this house” lawn signs. You know, the ones that scream, “I’m more virtuous than you because I blindly recite this script.” Working for a local school district, I have seen a lot of these in school classrooms as of late along with cute little garden flags hanging outside of classroom portables: “Hate has no home here”, the sign reads. Hearts and raised fists of all colors of the rainbow add more dramatic effect to these.

I seriously want to ask these people, “If hate has no home in your classroom, does it have a home next-door? I don’t see your colleague hanging a sign. Phew. THANK GOD these precious little babes are in YOUR classroom! So glad you think science is real! You’re so….uhhh…equitable!”

Now, if I were to really do this, I would probably be fired or, at the very least, be faced with some written reprimand. If I still remained employed after asking said teacher why and how Communist fists represent love and not hate, I would be dubbed a hater by said circle of woke.

Derek Hunter breaks this down even more for Townhall:

It’s been clear for a long time that Democrats seek to impose economic policies that hurt the American people, but they’d left us alone physically, for the most part. Sure, their Brownshirts in BLM-ANTIFA have been beating people and trying to kill police officers for over a year, but the main party and politicians distanced themselves from that violence with the help of the media. Now, the White House itself is threatening to do physical harm to people for the simple fact that they’ve elected Governors Democrats disapprove of.”-Derek Hunter, Townhall

Hunter elaborates on this by illustrating how the Democrats are rationing COVID care to blue states, leaving those in red states to die, basically. But, we’re the haters.

“We need to be equitable,” says Jen Psaki. We need to not “play politics with the lives of children“, says Joe Biden (or whoever writes his Twitter feed for him).

Yet, here we are.

Florida is going to get 40,000 fewer doses of an incredibly effective treatment for COVID than it needs this week, risking every one of those lives, and no one thinks it’s worth asking about? No one with a press pass knows the population of Florida vs Oklahoma, or their COVID rates? If it’s not New York, they don’t care.”-Derek Hunter, Townhall

But they’re doing this in the name of equity, so they say. Because they are our moral betters and know what is good for us. They are the compassionate ones. We’ve seen a lot of things change in the name of “equity” over this pandemic. Telling a person of color over and over again that they are victims of a systemic system is not equitable or loving, for example. Dumbing down classes and lowering standards in education because some six-figure-salaried white dude who’s buddies with a blue-state governor thinks this will “help” the poor, disadvantaged children is not loving. It is masked contempt and hate in the name of “equity”. All together, now, children, repeat after your moral betters and follow the script:

In this classroom, we believe
Black Lives Matter
Women’s rights are human rights
No human is illegal
Science is Real
Love is Love
Kindness is everything
Water is life

Yeah, and the sky is up.

Democrats have always wanted people who displease them dead, now they’re doing something about it. They hate you, and they’re open about it and proud of it. Return the favor.”-Derek Hunter, Townhall

But Black lives matter and women’s rights are human rights (who knew we women are human)? Black Lives Matter as long as they’re in the states that matter. A Black, Conservative man in red-state Florida could die from COVID for all they care. A woman and mother, who worked hard her whole life and immigrated to this country from Mexico will sit in a hospital in Texas waiting for COVID relief, hoping to live to see her son graduate high school this year. She will be waiting longer for this relief because she lives in Texas. An elderly grandma living in Idaho who was active in her church and loved by her community for helping those in need will be left for dead because she didn’t tune in to TikTok and believe the Fauci science. And, Lord have mercy. God help the gay Republican in Montana!

Kindness is everything, they say. Except when it’s not. This is some serious hate.