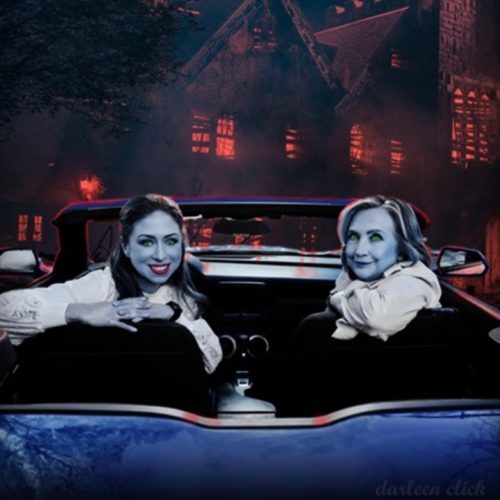 We know what you’re thinking and feeling. These Gutsy reviews need to end. But I made a commitment to follow through and review all episodes, so here we are. Le Grand Finale of Gutsy, the series, starring and produced by Hillary and Chelsea Clinton.

Gutsy, Episode 8 begins with Hillary, in an ugly tent dress and Chelsea visiting Topanga to Tango with mother/daughter duo, Goldie Hawn and Kate Hudson. Why? Because Gutsy Women Are A Bunch Of Mothers and nothing says Gutsy like a few actresses in their elite bubble doing the Tango with the Clintons. This, in summation, brings me to my first conclusion about Hillary and Chelsea Clinton as we wrap this thing up.

They flaunt it. Whether it’s jetting off to Paris to clown college, hanging in Malibu to paint with Megan Thee Stallion, talking vaginas over tea with Amy Schumer in New York or to yukking it up in the Writers’ Room at Amber Ruffin’s house, they are very proud of themselves and their circle of friends. While trying to be as down-to-earth as possible, Hillary and Chelsea Clinton show us who they really are: elite political figures who are part of a bigger machine. They are the so-called “cool kids”. What is a Mother to Hillary and Chelsea? Someone to go on cool road trips with. Someone to run with other women who shamelessly self-promote and pat one another on the back like they are doing great things because they are the morally astute and know better than the other mothers in Po-Dunk. They’ll produce a show, invite their friends and tell others what their world view should look like.

2. Hillary and Chelsea are tone-deaf or just plain confused.

This series was supposed to be about “gutsy” women. Yet again, in Gutsy, Episode 8, Hillary and Chelsea spotlight Ceyenne Doroshow-the self-proclaimed “godmother of Black trans“. (Read=born a biological male.) After all of this, one could begin to wonder if the mother-daughter duo are obsessed with transgender women and drag queens. Or, it could be that between both of their Ivy League educations, they could not see the optics of weaving biological men into their macrame of Gutsy women? Perhaps they saw it and ignored it because “there are more than two genders” as the new science (some of it also from Harvard and Yale) tells us. What is a mother, again, Hillary and Chelsea? May I recommend a documentary from Matt Walsh? Speaking of Mr. Waslsh, here’s what he had to say:

3. Hillary and Chelsea are as unappealing as ever.

Between Hillary Clinton’s ultra-loud, shrill voice and incessant cackling at the beginning of most of these episodes, it leaves no pause as to why she did not get elected in 2016. In most of these interactions, she is awkward AF and we find Clinton stretching to throw in the political talking points. They are all there, trust me. The LGBTQ+ community, climate change, anti-law-enforcement rhetoric, anti-white sentiment. She is as unrelatable as ever and these interactions illustrate her disconnect perfectly. She panders and it’s gross. They think they’re being subtle but they are as subtle as sledgehammers, these two.

Chelsea narrates most of these scenes and the vocal fry is real. In fact, it worsens as the episodes drone on. She shows that she is a true product of both of her parents and boy-oh-boy, does she recite the script well. In Chelsea Clinton’s defense, she truly believes it. She has been conditioned in her sheltered, spoiled life. You can see the prim-and-proper snoot oozing off of her. She’s robotic in a sense but I do understand why she’s part of the show. She’s there to appeal to the younger generations because Hillary has no appeal whatsoever. And, admittedly, she is slightly warmer than her old battle-axe of a mom in some of these exchanges with their chosen guests. She is also there to tell the story…a love story (GAG) between Hillary and Bill. This is a constant theme that comes up in the series. This series, no doubt, was all about Hillary-all about her “choice” to move to Arkansas and marry the love of her life-the man who became President of the U.S. and subsequently philandered his way through multiple affairs. “Gutsy” Hillary had obstacles she had to overcome through this infidelity and betrayal. And she raised a daughter, to boot. Because Gutsy Women are Mothers, yo.

Hillary Clinton continues to want to clear her name for being silent on this abuse for so long because of her personal interests by claiming she “chose” to stay to William Jefferson Clinton. Many of the women she and Chelsea interviewed, left in similar situations. They walked out. They never looked back. They stood on their own two feet and survived despite the circumstances. Some of these women, and their daughters, are truly remarkable. They even help other women escape infidelity, betrayal, sexual harassment and abuse. Hillary let it happen. Any opportunity to shine for these women is dimmed by Hillary’s constant comparison and desire to draw a parallel of their lives to hers. Sorry, but we’re not buying this martyr bullshit from Hillary. She stayed and chose to remain mum on corruption and deviant acts because she knew what she stood to lose if she left or, heaven forbid, stood up for these women. Far from gutsy, I’d say. Her adult daughter knows this but she does not care. Why the hell would she? She is reaping the benefits of her mother’s decisions. And, yay, they get to produce a show together!

But being a mom is one of the gutsiest things you can do, according to Hillary Clinton. Hey, hey, pro-abortion-my-vagina-my-choice-Amy Schumer types: Madame Secretary has spoken. Instead of engaging in an act of cowardice-go forth, be gutsy, y’all-and bring that (future) gutsy woman into this world!

We end with one quote from Hillary Clinton:

You know, I think for my mother, the core of everything she taught me was that I was the only person who could ever be me. And, what was I gonna do to make the most out of it?”-Hillary Clinton

Again, thank God there’s only one of her. You certainly are a (AHEM) mother, Hills.