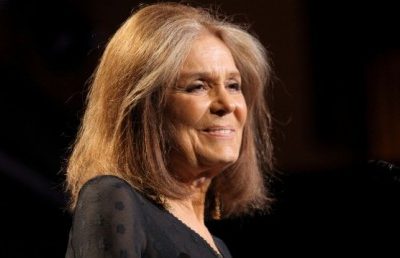 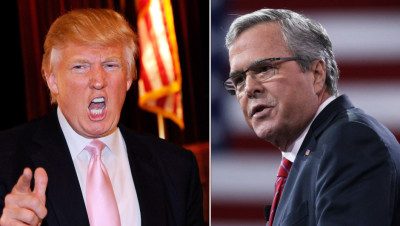 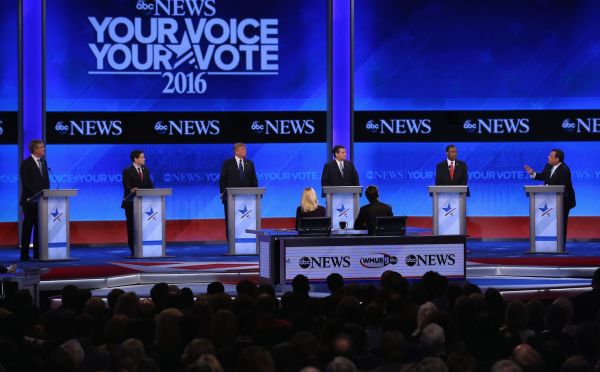 The final GOP debate before the “First in the Nation” New Hampshire primary aired on the ABC network and was sponsored by ABC News and the Independent Journal Review or IJR. The moderators were George Stephanopoulos, David Muir and Martha Raddatz with additional questions from WMUR political director Josh McElveen and the wonderful Mary Katherine Ham.

On the debate stage for the GOP were Ben Carson, Jeb Bush, John Kasich, Chris Christie, Ted Cruz, Marco Rubio and Donald Trump. Missing from the stage were Jim Gilmore and Carly Fiorina. There is a theory floating around my house that ABC News did not want Mrs. Fiorina on the stage because it would remind the single issue, vagina voters that there is another choice for the “First Woman President of the United States of America.” There is a choice that does not involve a lecturing, hectoring, hall monitor type (#Hillary). Be that as it may. #LetCarlyDebate trended but got nowhere with ABC or the spaghetti spined GOP Poobahs.

ABC seriously screwed up the candidate introductions by not having a stage manager with headphones sending the candidates on to the stage. Left the candidates standing around and contemplating their shoes. Way to start with a hot mess.

And, Ted Cruz’s microphone needed to be adjusted. It sounds like he is sending signals every time he touches his podium. 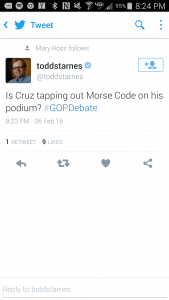 GOP voters don’t give a flying flip about Carsongate or Rick Santorum endorsing Marco Rubio. We don’t want to hear Chris Christie bullying about his being a Governor versus the senators. We would like to hear broad, conservative principles. Chris Christie wants to talk about snow removal and schools. We want conservative ideas and principles.

The candidates descended into the mud pit and had a really ugly exchange.

News that the North Koreans fired off a rocket calmed the candidates down and brought some sobriety to the debate. Thank you, Kim Jong Un. We owe you for that one.

The discussion of border security had John Kasich sounding like the teacher from Peanuts. Wah, Wah, WAh. And, Marco Rubio having to answer for his Gang of Eight legislation. Chris Christie reminded us, yet again, that he is a Governor.

Finally, the sparkling Mary Katherine Ham gave the candidates a question about Hillary Clinton’s single payer plan. Donald Trump answered with lifting the artificial state boundaries and Healthcare Savings Accounts. But, Mr. Trump people are not dying in the streets. Shut up. Mary Katherine Ham finally asked a question that allowed the candidates to outline principles.

And, Donald Trump gave a lecture on eminent domain and Jeb smacked him down. Donald Trump told Jeb to be quiet and got booed. And, Donald Trump announced the the Republican Committee told him he couldn’t get tickets because the audience was all donors. And, then they argued about parking lots and limousines and old ladies. IDK.

David Muir asked “What does it mean to be a Conservative?” He started with John Kasich. Mr. Kasich does not understand what being a Conservative means. Trump doesn’t have a clue either. Marco Rubio explained Conservatism to Mr. Kasich and Mr. Trump.

Ted Cruz really screwed up his answer on waterboarding. It is enhanced interrogation. It does work. It has never been done at the “lower levels”. Mr. Cruz has to know that. Donald Trump wants to waterboard and, apparently, most of the Medieval Torture Methods.

Josh McElveen asked Ted Cruz a cruel and loaded question about addiction. He slapped Cruz around about missing a hearing because he was campaigning and then asked him to talk about the family member. Chris Christie talked about what he has done and how he is working with state of New Hampshire. New Hampshire has a real Heroin crisis.

Mosquitos and selective service for women questions laid around and went nowhere. Josh McElveen then reminded all the candidates that they have never served in uniform. Jeb Bush said that a veteran was declared dead by the Veterans Administration and now the dead guy is going to vote for him. Dead Veteran voting for Jeb started trending on Twitter immediately. 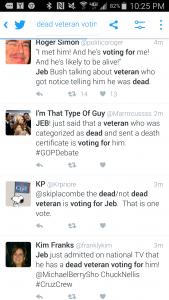 Victory Girls watches so that you don’t have to watch. It’s Scotch and water time in Tennessee.