Religion permeates everything that we do. Even a lack of belief in God—atheism, if you will— is a belief-system. One of the reasons this country was formed initially was because of religious oppression in England. That’s why freedom of religion is enshrined in the First Amendment to our Constitution. That Amendment contains two provisions related to religion – in essence, a part saying that the government shall not abridge the right to practice our religion and a part saying that the government shall not endorse specific religious beliefs.

The balance between these two parts of the Constitution’s religious freedom provision has been the focus of numerous legal battles. Moreover, battles have raged between the overall right to religious freedom and other rights, both real and perceived. It is not news that we are seeing multiple battles between conflicting rights in many aspects of our culture. This week there were at least three instances where such clashes appeared in the news.

First was the Hollywood Hotel situation, about which we have reported here on Victory Girls. 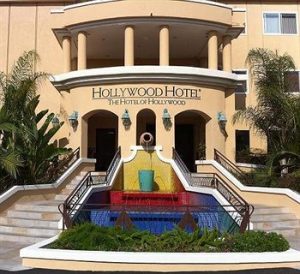 This famous hotel is a movie star hang out, and it usually has waiting lists for headliners hoping to be seen during power lunches. But in recent days, it has been all but abandoned by celebrities. The reason is that the hotel’s owner, the Sultan of Brunei, recently announced that his homeland of Brunei would implement Sharia law as the law of the land. Brunei is sovereign state located on the north coast of the island of Borneo in Southeast Asia and is the second richest country in Asia after Singapore. Here is how the story is reported by one news agency:

On May 1, 2014, Brunei became the first country in Southeast Asia where the Islamic legal system is enforced on a national level.

Since then, the first phase of Brunei’s penal law reform has been in effect. Violations such as not fasting during Ramadan and missing the Friday prayer can be punished with fines or jail time. The second phase will begin in 12 months: Muslims who commit theft or drink alcohol can then be punished with whippings or even have a limb cut off. In the final phase, capital punishment, including stoning, will be imposed for adultery, sodomy and insulting the prophet Muhammad.

It’s not clear yet how the newly implemented laws will coexist with the civil and penal law inherited from the British colonial power. Joshua Roose, political and social scientist at the Australian Catholic University in Melbourne, however, cautions against knee-jerk reactions: “One has to remember that there is leeway in how strictly you interpret the Sharia.” According to the researcher, it remains to be seen to which degree these laws will actually be applied.

Hollywood seems to have decided that this action by the Sultan in his home country is unacceptable. Just as the NBA is trying to force the owner of the Clippers to sell his NBA team, Hollywood is trying to force the Sultan to sell the Hollywood Hotel. The Sultan is reportedly not interested in selling, however, but rather is looking to buy additional property in New York. Indeed, the Sultan has hired a former Clinton administration official to run damage control for the troubled property.

Perhaps the implementation of Sharia law in Brunei is a despicable thing. But what troubles me is the hypocrisy of the Hollywood crowd in this seemingly meritorious display. They have had no problem with other instances of Sharia law when the entities practicing it have something to offer the celebrity world — such as Dubai and other parts of the oil-rich world that support Hollywood’s over the top celebrity indulgences. I predict that the Sultan will stand his ground, Sharia law will become entrenched in Brunei, and Hollywood will let the feigned outrage slip out of the headlines. Celebrities will quietly ease back into the upscale hotel’s restaurants, and the Hotel Hollywood crowd soon will be singing “Happy days are here again” as they rub elbows with the money-changers. And the Hollywould-be do-gooders will pat themselves on the back for standing up for human rights against an oppressive regime. And the regime will reign on.

In another high-profile relion-related story, twin brothers David and Jason Benham were offered their own reality show by HGTV last year. They already had begun filming their new series when gay activists pressured HGTV to terminate the brothers’ show before it ever aired. The activists objected to the fact that one of the brothers had expressed his politically-incorrect Christian beliefs about the erosion of family values and morality that is destroying the fabric of our nation.

What many do not know is that HGTV officials were aware of the brothers’ Christian views long before these activists exerted their pressure. HGTV was fine with the brothers beliefs and were proceeding with production until this past week when the hate-filled protesters reached a fever pitch and HGTV officials caved. Some have likened the Benham brothers being canned to the A&E situation with Phil Robertson last year.

Last December Robertson’s fan-base erupted when it was announced that A&E had suspended him from Duck Dynasty following his making honest remarks during an interview with GQ magazine. A&E was subsequently bombarded with a show of support for Robertson, and the network then dropped the suspension. Unfortunately, the Benham brothers do not yet have a faithful fan following to rally behind them since their show has not yet aired. To their credit, the Benham brothers do not blame HGTV inasmuch as the network made a “business decision” and acted in the network’s best interest. But the brothers do lament the fact that the left-wing thought-police have been extremely successful in stifling religious beliefs and free speech in Hollywood and other entertainment locales in recent years.

Another lesser profile story with religious freedom implications emerged late in the week from Kentucky. Several Native American inmates who are on death row are seeking to have the state build them a sweat lodge so they can practice their religion. A sweat lodge is essentially what the name suggests — a structure where one can go to sweat. The practice has spiritual implications, however, and is more than just a sauna. The sweating is a means of cleansing bad spirits from the body. The website of Barefoot Windwalker has an interesting description of a sweat lodge and the ceremonies that take place within. Although the structure is relatively simple and small, it is easy to see why prison officials would be wary of constructing such a structure within the confines of a prison.

Eddyville is the prison where this particular suit is taking place, and that facility is not far from my hometown in Western Kentucky. I have known a number of Catholic priests who have served as chaplains at Eddyville. Each of them can attest to the importance of being able to practice one’s faith even when incarcerated. But the question is, how far does a prison have to go in order to accommodate the perceived needs that a specific individual’s faith demands. And which of those needs is a right that is Constitutionally protected?

Catholic Mass is usually a permitted service in U.S. prisons. However, conflicts have arisen on occasion when prison authorities have decided that priests could not bring in wine for the the Eucharist celebration. Concern over having alcohol in a prison is easy enough to understand. However, the complete prohibition of wine conflicts with Catholic canon law, which holds that both the bread and the wine must be part of confecting the Eucharist or the consecration is invalid. Grape juice will not suffice for Eucharistic purposes. In the cases of which I am aware, the compromise has been that a minimal amount of wine can be brought in and used by the priest, but the inmates cannot partake of this species of the Eucharist. That is perfectly fine, as the Sacramental reception of the Eucharist is satisfied by either species. (To date I have not heard of any situation where a prisoner who has celiac disease or is otherwise gluten intolerant has raised an issue, since normally such an individual can receive Communion under the form of wine.)

I am not trying to provide a theology lesson here. Rather, my point is that a compromise can usually be reached in these cases if both sides truly are sincere in what they are trying to achieve. Safety is certainly of utmost importance in prisons, while the ability to practice one’s faith is also crucial for believers. The questions is: Is there a middle ground that can be reached when it comes to the demand for a sweat lodge for the Eddyville inmates? If prison authorities and the inmates will look at the purpose of the structure and what is required, I am a firm believer that some compromise can be reached. But when the sides become so polarized that neither is willing to bend on their demands, one side is always going to lose out.

These and the dozens of other ongoing battles over religion and personal beliefs illustrate how important the United States Constitution’s First Amendment is when it comes to the religious freedom provisions. Two of these stories seemingly involve non-government action. Only the prison situation appears on its face to be government action. The Constitution provides that government is not to establish religion nor impede its expression. The actions of HGTV and Hollywood protesters do not, on their face, involve government action. But when government is so swayed by one small, loud sector of society to the point that government ends up endorsing the suppression of religious beliefs, it is up to believers to speak louder than the bullying faction and insist upon the protections that the Constitution affords.