Moms Demand Action Refuses To Back Down From A Lie

Next post
From Hollywood to Eddyville: Battles of Religion and Freedom

Moms Demand Action Refuses To Back Down From A Lie

The group Mom Demand Action is caught in a bind.  They got taken in by a now-disproven police report, and proclaimed that report far and wide to force a statement from a fast-food chain.  Now that the report has been proven to be false, they are refusing to amend their statements.  The lie serves their narrative SO much better than the truth does.

The initial story, when first reported, claimed that an open carry demonstration at a Jack In The Box restaurant frightened employees so badly that the employees ended up hiding in a walk-in freezer while they called the police.  The root of this claim can be traced back to an email from Fort Worth police department spokesman Sgt. Ray Bush, who claimed that the fast-food workers “locked themselves inside a freezer for protection out of fear the rifle-carrying men would rob them.”  Moms Demand Action instantly seized upon this email and the story, demanding that Jack In The Box ban all guns from their restaurants.  Predictably, Jack In The Box conceded to Moms Demand Action.  In a statement to the media announcing their new policy, vice president of corporate communications Brian Luscomb said:

The presence of guns inside a restaurant could create an uncomfortable situation for our guests and employees and lead to unintended consequences.  While we respect the rights of all of our guests, we would prefer that our guests not bring their guns inside our restaurants.

Welcome to Starbucks territory, Jack In The Box.  It’s not going to be a fun place to be for you.

And then the narrative fell apart when the same VP then said this, as reported by the New York Times Gun Report blog (after they ran the initially reported story):

An earlier version of this post included information from Sgt. Ray Bush of the Forth Worth Police Department, who wrote in an email last week that the employees at the Jack in the Box where Open Carry Texas staged a demonstration “locked themselves inside a freezer for protection out of fear the rifle-carrying men would rob them.” However, Brian Luscomb, vice president of corporate communications for Jack in the Box, told the New York Times this evening, “Our employees told us that they did not hide in the freezer.” We have amended the post to reflect this new information.

Plus, Open Carry Texas  then started posting pictures like this: 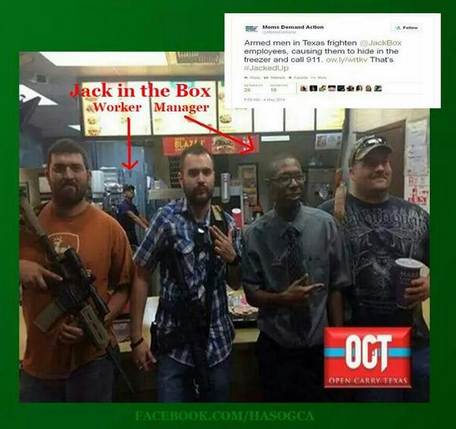 Clearly, the employees are in fear of their lives and hiding in a freezer.

Wherever Sgt. Bush got his information, it clearly was wrong.  The false report probably embarrassed the hell out of the Jack In The Box employees, which probably prompted VP Luscomb to make his additional statement.  After all, this IS Texas we’re talking about.  And if they employees were truly so cowardly that the mere sight of a gun was enough to make them run and hide, I would expect that this particular Jack In The Box would be held up in an armed robbery within a week after that news got out.

However, even though the New York Times issued an update and correction to their story, Moms Demand Action has responded with… crickets.  In fact, Moms Demand Action leader Shannon Watts (who likes to hide behind her group and her Twitter handle – she’s not so big on facts and personal confrontations) has apparently blocked people on Twitter who have dared to ask her to respond to and correct the “hiding in a freezer” lie.  You see, Shannon’s already moved on to her next target….

.@Applebees is this true? @opencarrytexas says you support open carry in restaurants. Please say you have #gunsense pic.twitter.com/HTYfI0eHJV

Hopefully, Applebee’s will show some backbone and tell this hoplophobic bully to mind her own business.  Because if they don’t, her track record with the full truth is not a good one.  She might just let a lie stand to get her own way.