Previous post
Terry McAuliffe: School Choice For Me, Not Thee 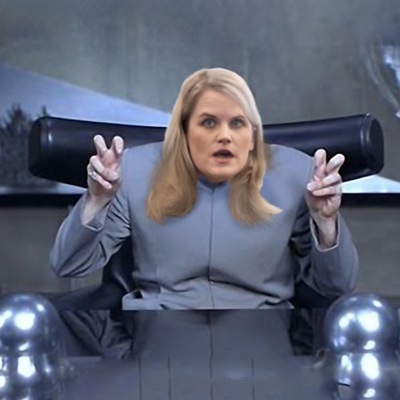 As they say in the South: Well, butter my butt and call me a biscuit! Facebook snitch Frances Haugen will meet with the all-Democrat January 6 Committee (members Liz Cheney and Adam Kinzinger don’t count as Republicans). She’ll abandon her Champion of Preteen Girls shtick to become an internet Dr. Evil who wants control over speech.

See? Didn’t we warn you? While the media gushed over Haugen’s deep concern for the mental health of preteen girls, underneath her glossy veneer lies another Democrat lizard person. Deanna gave us our first hint at more to come on Monday, when she wrote:

“She believes that Facebook can be remade into a force to promote her version of a good, responsible, safe and moral social media – and she wants the FEDERAL GOVERNMENT to push down regulations on Facebook to make that happen.”

And while the media and Democrats would prefer you keep your focus on the problems of girls on Facebook, what you need to know is how Frances Haugen has deep ties with Democrats. How she and colleagues at Facebook thought that the company dropped the ball after the 2020 election. And how she wants government to control all social media speech.

She hinted at this during her ballyhooed “60 Minutes” appearance on Sunday, telling Scott Pelley:

“And as soon as the election was over, they turned them back off or they changed the settings back to what they were before to prioritize growth over safety. And that really feels like a betrayal of democracy to me.”

Not that limiting free speech is a betrayal of democracy. Just publishing the speech that she doesn’t think should be heard.

And guess who really wants to hear from Haugen before the January 6 committee? You guessed it: none other than that creepy little toad, Adam Schiff:

According to this Facebook whistleblower, shutting down the civic integrity team and turning off election misinformation tools contributed to the Jan 6 insurrection.

The Select Committee will need to hear from her, and get internal info from Facebook to flesh out their role. https://t.co/b9ZLhf9lMX

Oh, I’ll bet he was doing a happy dance after CNN annouonced the meeting! I’ll bet he could barely sleep.

You wanna know about Frances Haugen’s agenda? Allow me to elaborate.

“While I will intentionally not link to the New York Post, I want be clear that this story is eligible to be fact checked by Facebook’s third-party fact checking partners. In the meantime, we are reducing its distribution on our platform.”

Guess who was on the team that deep-sixed the Biden story: none other than Frances Haugen. As a matter of fact, she joined Facebook in 2019 on the condition that she work on a “misinformation” team. Called the “civic integrity unit” (sounds Maoist to me), the 200-person unit lasted until after the 2020 election. Their job, according to the New York Post, was to build a system “to track misinformation targeted at specific groups of people in just three months.”

Wanna tell me again about that “betrayal of democracy?”

But wait! as they say on infomercials, there’s more!

A search of Frances Haugen’s financial records shows that she actively contributed to over 40 Democrat candidates and causes. These include donations to Alexandria Ocasio-Cortez, Act Blue, and the Democrat Senatorial Campaign Committee. While the totals are rather small — about $2000 since 2015 — Haugen didn’t take care of her own financial obligations. In fact, in the month that she threw money at AOC’s campaign, the IRS slapped a $44,000 tax lien against her due to unpaid taxes. And while the IRS has released her lien, Haugen’s own attorneys are trying to raise $100,000 in GoFundMe bucks to pay for their legal fees.

And speaking of those attorneys, they belong to “Whistleblower Aid,” which was co-founded by Mark Zaid. If that name rings a bell, it’s because he was part of the legal team that represented the fake “whistleblower” who supposedly had the goods on Trump’s Ukraine phone call.

Tell me again how Frances Haugen is merely a saintly champion for little girls who feel insecure when they look at Instagram pictures.

No, she runs with Democrats who want to use Facebook to control everything you see on social media. As Glenn Greenwald wrote:

“Far from being some noble whistleblower, Frances Haugen is just their latest tool to exploit for their scheme to use the power of social media giants to control political discourse in accordance with their own views and interests.”

He also published a Pew Research graph that shows how Democrats and liberals favor government takeover of tech firms. 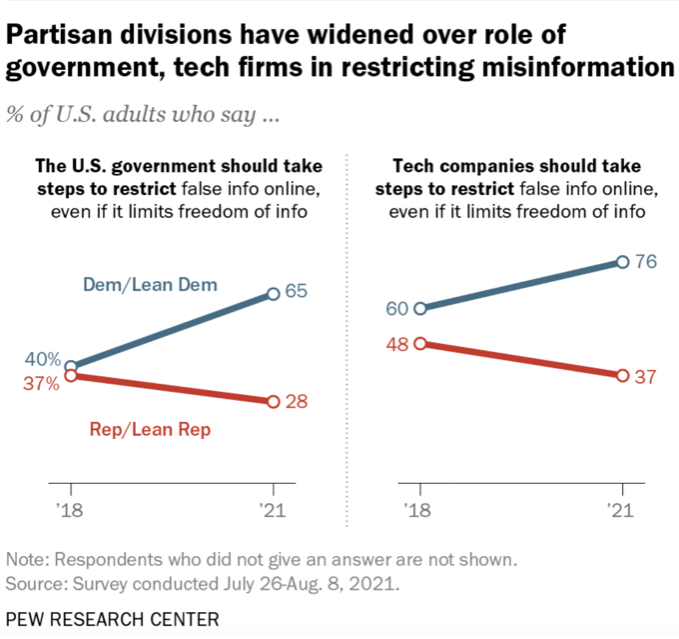 No wonder it’s the Democrats who idolize this woman. She could be their ticket to government control of the internet.

So now Frances Haugen will meet with the January 6 committee, no doubt to fill Democrat heads with ways the government can use tech giants to silence conservatives. She’s no Angel of the Internet. Frances Haugen instead is a leftist shill who wants to control speech on public platforms.

Don’t say we didn’t warn you.