Next post
Gen Z: The Kids Are Not Alright 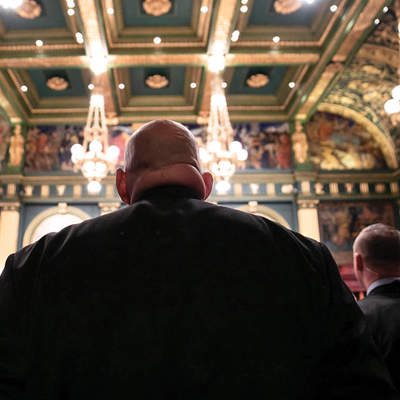 Early on Wednesday morning, The Hill predicted that John Fetterman would win the Pennsylvania Senate race, citing a Muhlenberg College poll showing that he was up 49% to 44% over Mehmet Oz. As for that poor debate performance? According to Terry Madonna, a PA pollster, Fetterman’s “base of support is very firm.” Plus, he predicted “an empathetic reaction among his base of supporters.”

While a Monmouth Poll also released on Wednesday acknowledged that the gulf between Oz and Fetterman was narrowing, they said it won’t be a problem for him. Few voters will reconsider their support even after the debate during which Fetterman bumbled his way throughout. “The Democrat continues to be seen as having a better understanding of voters’ day-to-day concerns,” wrote Monmouth.

But two other polls released late on Wednesday didn’t paint such a rosy picture.

According to that new USA Today/Suffolk University poll a whole lotta Pennsylvania voters who said they would support Fetterman are now having second thoughts. Apparently seven percent said the stroke he suffered in May was a game-changer for them. They’re now supporting other candidates or remaining undecided. Consider, too, that the Muhlenberg poll which gave Fetterman the 5-point lead over Oz was taken from September 13-16, prior to his disastrous debate performance on October 25.

In addition, a new Real Clear Politics average shows Fetterman up by only .2% — that’s .2% — with an adjusted average giving Oz the edge by 2.9% as of this writing. (Real Clear Politics also is projecting that Republicans not only hold the Senate after the midterms, but pick up four additional seats. But let’s not count our chickens just yet.)

It Gets Worse for Fetterman

Don’t be confused — the Post-Gazette has no love for Oz. But its editorial board has concerns other than the stroke:

“Mr. Fetterman’s life experience and maturity are also concerns. He has lived off his family’s money for much of his life …”

“Mr. Fetterman, despite his hoodies and shorts, has little experience in holding real jobs or facing the problems of working people.”

On top of that, a conservative watchdog group filed an ethics complaint over John Fetterman’s land purchases. The Center for Accountability and Government Ethics (CAGE) alleges that he violated Pennsylvania’s non-profit laws in his purchase of eight properties in Braddock, where he formerly served as mayor.

And, of course, the elephant in the room is the stroke that Fetterman suffered in May.

On Tuesday, he appeared in friendly territory at CNN for an interview with Don Lemon. The subject was Elon Musk’s takeover of Twitter.

“Just ask yourself, let’s say you were getting on an airplane and the airline pilot had had a similar cognitive impairment. Would you get on? Well, hell no.”

What About That Medical Clearance?

Remember how John Fetterman insisted during the debate that his doctor cleared him for holding a Senate seat?

Dr. Clifford Chen is not a specialist in stroke or other neurological impairments. He is a Family Practice doctor in Duquesne, PA, near Pittsburgh. Not only that, but the good doctor has been a solid blue Democrat donor, too.

Meanwhile, John Fetterman has released no reports from specialists who would’ve treated his stroke. These could include a neurologist, a neurosurgeon, a neuroradiologist, a cardiologist, and a physiatrist. Nor do we have any reports from support professionals such as a psychologist, social worker, physical and occupational therapists, or a speech-language pathologist.

And, as a retired speech-language pathologist, I find Fetterman’s claim that he merely has “auditory processing problems” to be bogus. He appears to have impairments both receptively (understanding language) and expressively (using language, both verbal and written). As for him insisting that “all I need is this trusty closed captioning device” — that’s baloney too. How would that work in an environment like on the Senate floor, where there’s ambient noise all around? Or in the hallways as he’s walking to his office, and reporters are peppering him with questions?

And how well can he really read, too? Moreover, has he maximized the recovery of his communication skills, which typically top out six months post-stroke? We have no report on any of that, either.

There’s yet another elephant here: John Fetterman has a serious heart condition that led to his stroke, and that he previously left unaddressed. In 2017, Dr. Ramesh Chandra of Alliance Cardiology diagnosed him with atrial fibrillation, and prescribed medication along with changes in diet and exercise.

But apparently Fetterman let that slide for five years. Not only did he fail to follow up with a return visit to Dr. Chandra, he didn’t take his meds. Worse yet, in 2018 Fetterman ran for lieutenant governor and later in this year’s Senate primary without informing anyone of his condition.

And this is the guy who wants to serve six grueling years as a US Senator? Not only is he physically unfit for office, he has shown a disturbing lack of responsibility, too.

But it looks like voters in Pennsylvania are finally waking up to this hulking fraud. I’m no fan of Mehmet Oz, but if I were a resident of the Keystone State, I’d hold my nose and vote for Oz.