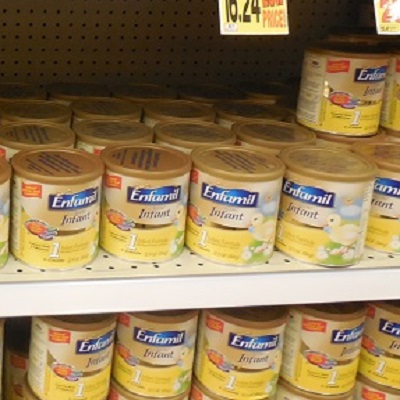 by Shelby Gallagher in Headlines 3 Comments

Monday the Food and Drug Administration (FDA) demonstrated how much they care, reaching a deal with baby formula maker, Abbott Nutrition, to re-open one of their production plants to ease the baby formula shortage.

“Abbott Nutrition, the maker of Similac and other popular baby formulas, said Monday it has come to an agreement with the Food and Drug Administration to fix safety issues at a Sturgis, Mich., factory that has been shuttered for more than three months, contributing to a nationwide formula shortage.”

For the freaked-out families trying to feed their babies, while the news seems good, it really isn’t. Abbott indicates it could be two months before formula, which includes labels like Similac, Alimentum and EleCare, is on shelves.

Despite all the media spinning and understandable fear, here’s the facts.

First, Abbott Nutrition, voluntarily closed their Sturgis, Michigan plant a few months ago, after hearing reports infants died from bacteria that possibly came from their formulas. The FDA has posted those press releases:

The link is worth the read. Abbott Nutrition voluntarily closed the plant due to an abundance of caution. The FDA didn’t come in and shutter their doors.

Second fact, the Biden administration was warned of the looming shortage, and did nothing. Others in Biden’s own party could see the shortage coming. Senator Jon Tester (D-MT) had a clue in February and raised a flag to the FDA.

“Sen. Jon Tester (D-MT) said that he pressed the head of the Food and Drug Administration ‘months ago’ on the baby formula issue and stated that right now the White House is ‘taking appropriate steps’ to fix the issue and is ‘taking it seriously and I think they’re moving forward in the right direction.’”

In one of her final press conference briefings, Jen Psaki, piped up saying the administration is doing all it can during the “Abbott voluntary recall”. Keep that detail in the back of your mind—for formula maker, Abbott Nutrition, the recall is voluntary. As stated by the FDA’s website and Jen Psaki at the 0:11 mark.

If you kept watching, you heard the urgent partnership with retailers to come to the aid of concerned families—at the :14 mark, “this is work that has been underway for months.” Apparently, Biden visited with retailers such as Walmart and Target to help the shortage.

Let me state the obvious—retailers can’t provide products they don’t have.

No information from the Biden administration—on Monday. You know…the day the FDA negotiated for Abbott to re-open the plant in Michigan. She’s got nothing.

At least Jen Psaki made it sound like President Brandon was doing something.

Back to the negotiated deal with the FDA and formula maker, Abbott Nutrition. In all the “good news” surrounding Monday’s deal with the FDA, since when does a company’s voluntary recall require FDA approval to reopen a plant? Nonetheless, the FDA, in their bigness and generosity,

Today, we’re announcing important updates on our ongoing work to increase the supply and availability of infant formula in the U.S. https://t.co/fsxml9Pkrb pic.twitter.com/YvYkU7sC8b

This is the same FDA that knew of the looming shortage three months ago, was warned, and did nothing for months. Let’s also not forget, the same FDA stopped imports of foreign made formula for safety concerns as well. Those were lifted Monday as well.

“The FDA said on its website that it is offering a ‘streamlined import entry review process’ for products from foreign facilities that have ‘favorable inspection records.’..it would expedite the necessary certificates of products that are already allowed into the U.S., to enable them to have ‘flexibility’ in the movement of those formula products.”

Third set of facts; during the panic-stricken shortage, the FDA gave insane advice to families who need answers and guidance. Don’t make your own formula and feed it to your baby. Don’t give your babies goat’s milk. Don’t. Don’t. Don’t. A very serious question to pose to the FDA; what should families do? Let their baby die? Knowing the administration’s hard-core support of abortion, let’s keep that question rhetorical. For now.

This is the same administration that did their darndest to force all Americans, including babies, to get vaccinated for COVID. A vaccination that has arguably done more harm than good. For sure, it has either injured or tragically killed more people than the tragic lives lost to possibly-tainted baby formula.

This is why America has trust issues.