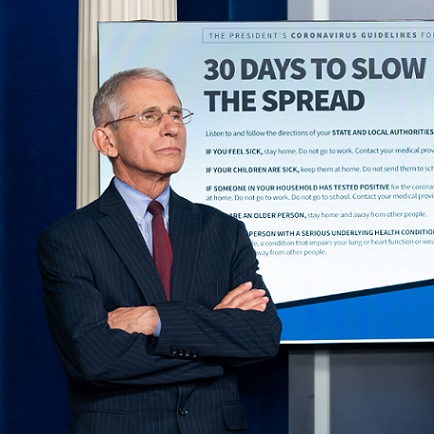 If one person has outstayed his welcome in this pandemic, it’s Dr. Anthony Fauci.

In the beginning, he was part and parcel of the COVID Task Force that was supposed to be giving us honest information. After his repeated flip-flopping and acknowledgement of outright lying, why anyone should continue to take him seriously is beyond me.

But here Fauci still is, past the first anniversary of the “15 Days To Slow The Spread” lockdown, and we are still hearing the media ask him for his opinion about everything. In reality, Dr. Fauci has turned into little more than a media Magic 8 Ball that they shake on Sundays to hear what tidbits of wisdom he is willing to dispense from his rarefied position of AUTHORITAH.

For example, we all know that Fauci is a huge baseball fan, and got to throw out the first pitch at the Washington Nationals home opener last year, along with being able to sit in the stands to watch the game. You know, while the rest of us sent in cardboard cutouts of ourselves to pretend there were crowds at games. As vaccination rates increase and COVID cases decrease, many MLB teams are going to be able to have fans in stands now. Apparently Fauci isn’t too thrilled about giving up his prime seating right away.

“I would expect that as we get through the summer — late spring, early summer — there’s going to be a relaxation where you’re going to have more and more people allowed into baseball parks, very likely separated with seating, very likely continue to wear masks,” Fauci told CBS anchor Margaret Brennan on “Face the Nation.”

God forbid we let people go back to their normal lives, even after they are vaccinated, or let people perform their own risk analysis, right??? Anthony Fauci is many things, but history has proven that he simply isn’t a good messenger for public health after repeatedly contradicting himself. There are 30 MLB teams, scattered across the country, and Fauci thinks that all of them are going to wait to open up on his say-so? The Texas Rangers have already announced full capacity for opening day. I guess Fauci won’t be able to get a super-special ticket there.

But what was even worse was in this same “Face The Nation” interview, Fauci talked about keeping kids masked up when they play together.

“The children can clearly wind up getting infected,” Fauci told CBS anchor Margaret Brennan on “Face the Nation” when asked about the risk of kids playing in groups.”

The Director of the National Institute of Allergy and Infectious Diseases said while adults inoculated against COVID-19 don’t always have to wear masks around each other, children — who are not yet eligible for the jab — should wear them around each other.”

“When the children go out into the community, you want them to continue to wear masks when they’re interacting with groups or multiple households,” he said.”

But when asked whether kids can return to camp or playgrounds this summer, Fauci said it was “conceivable that will be possible.”

Hey, Dr. Fauci – I have two words for you, and they aren’t Merry Christmas. The absolute insanity of forcing younger children, who we KNOW don’t carry or transmit COVID the way adults do, should be perpetually masked when they are playing with other kids – even in a low-transmission environment like OUTSIDE AT A PARK – is so ridiculous that it’s insane. Yes, kids can give each other COVID, but again, we know that this is barely happening in schools, and it’s usually happening over long periods of exposure within households.

And yet, the “experts” like Fauci have parents so freaked out that they will likely follow his instructions even though they don’t have to, because of this oft-parroted belief that “kids are resilient!” As my son’s speech therapist once said to me, “Yes, kids are resilient because we force them to be, and then they grow up into damaged adults.” We are seeing an entire generation of agoraphobes being carefully cultivated, and if you don’t think there will be long-term societal consequences from this, you are gravely mistaken.

And so much of this can be laid right at Fauci’s feet.

It's really time the Biden administration makes a real effort to control messaging on COVID. Fauci's purpose is no longer your safety or security, it's his continued relevance. https://t.co/BUsXjxBtFN

The problem is, the media likes the fear, because negative press sells. So they will keep asking the Fauci Magic 8 Ball for his take, because what he says still gets attention. Even if what he says is incredibly dumb, makes no consideration for risk assessment, and is designed to keep you out of “his” seat at the Washington Nationals games.