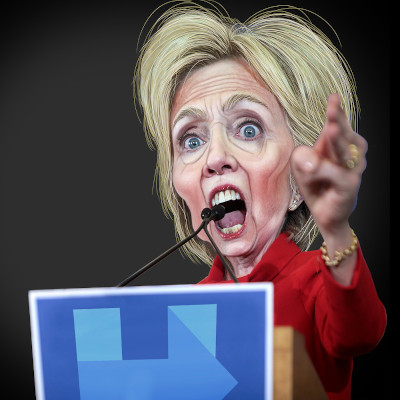 As the 2020 election season begins gearing up, a political battle is being waged for the future of this country. It’s a multi-tiered battle, one where a single misstep could cost us what freedoms we have left. It is a battle being waged within the Democratic Party, by the media and by Hillary Clinton. They wage war against not only Donald J. Trump and his supporters but against the very foundations of our nation.

This shouldn’t come as a surprise to anyone. The DNC manipulated its own rules leading up to the 2016 election to basically guarantee the party’s nomination to Clinton. She was their great hope to maintain the Oval Office. The gloated about how she would be the first female POTUS. None of them believed Trump had a chance in hell of defeating her. Her anger, as well as theirs, has not waned since the election.

Clinton hasn’t announced her candidacy. She may not. At least not if the party nominates a candidate on the first round, one she thinks will be able to defeat Trump. But she hasn’t settled into retirement, enjoying her time out of the spotlight, playing wife and grandmother or even elder stateswoman. Instead, she’s continued her attacks on Trump even as she reminds everyone she was the real winner of the election.

She was robbed, you see. But more on that in a minute.

Her latest jab occurred Friday. She appeared to help promote Hulu’s new four-part “docu-series” about her.

Doesn’t that sound more like a campaign ad than a promo for a “docu-series”?

During the press conference, she did her usual song-and-dance. But she also did something else. She showed that she doesn’t care about electing the person who will serve the best interests of our country. Instead, this is what she had to say:

Take your vote seriously . . . And for the Democratic voters, try to vote for the person you think is most likely to win — because, at the end of the day, that is what will matter. And not just the popular vote — but the Electoral College.”

“Vote for the person you think is most likely to win.” In other words, get Donald Trump out of office, no matter what the ultimate consequences. Way to look after the best interests of our country, Hills.

And that brings us to the next part of the Dems’ war against our country.

We’ve been assaulted with threats to do away with the Electoral College from the Left since the election. After all, it failed to put their candidate in office. How dare we not swear in the candidate who won the popular vote! We’re a democracy, damn it!

Except we aren’t and our Founding Fathers had excellent reasons for not creating this great nation in such a way. But, as they’ve done so many other times, the Dems didn’t like the result and they have done all they can to cancel it. The circus that has been the impeachment is just one example of it. Now the question of how electoral votes should be cast rests in the hands of the Supreme Court and it is expected a decision will be handed down by mid-summer.

Specifically, SCOTUS is deciding the issue of “faith”less electors“. Specifically, the Court has been asked to resolve the issue of whether “presidential electors have to vote in accordance with their states’ popular vote in the Electoral College.” The case arose after three electors cast their votes in 2016 for Colin Powell instead of for Clinton (who received the popular vote). The supposed reason for them voting for Powell because “they hoped to persuade enough electors in states won by Donald Trump to choose someone else and deny Trump the presidency.”

Now, those three votes wouldn’t have given Clinton the win. The three electors want the Court to say they have the right to ignore the way the people they represent vote because they know best. Okay, they didn’t come right out and say that, but they might as well have. They tried to manipulate the vote and failed. Then they got caught at it. Instead of accepting their punishment, they are trying to insure the DNC (and, conversely, the RNC) can invalidate the popular vote by stacking the electors.

A win for them with the case might not doom the country, but it will push us even further down the hill than we already are.

Tier 3: The War Being Waged Within the Democratic Party

Yes, you read that correctly. There is a war being waged within the Party, one which will determine whether the Party remains the party of Pelosi or the socialist party Franklin Roosevelt came close to condemning the country to.

On the one hand, you have Nancy Pelosi doing everything she can to hold onto the House leadership. Who knows how many deals she had to swing in order to return to the Speakership. We know she’s had more than a few run-in with the “posse”. We were just treated to her in full-form as she handed out souvenir pens after signing the articles of impeachment. Is it really too far-fetched to believe she held the articles back as long as she did to insure Warren and Sanders would have to spend valuable campaigning time sitting in the Senate for the impeachment trial?

If so–hell, even if she didn’t–we should probably thank her. Sanders is the best bet there is this election cycle for a socialist to win the Party’s nomination. If this happens, then the “ultimate goal” of “the posse”, of Sanders and of so many others butting heads with the establishment in the Party will be fulfilled. The goal?

[T]he transformation of the Democratic Party.

If they defeat the frantically-forming Biden wing of the party to win the primary, that prize will at once become more attainable and more imperiled than its been in 75 years, when President Franklin Delano Roosevelt’s socialist vice president was removed from the ticket — and thereby ascendancy to the presidency — for FDR’s final re-election campaign.”

Whether a Sanders loss to Trump would result in a schism in the Democratic Party along the lines of what we saw when Goldwater lost will occur, we can only guess. But the impact of a Sanders nomination will harm this country because it will be one more step toward legitimizing socialism in the eyes of so many. Instead of them accepting those candidates like Sanders and Ocasion-Cortez as part of the Democratic Party, the more liberal end of it, we need to recognize the fact they are Socialists. They want nothing more than to undermine and destroy the very foundations of our nation. They don’t love America.Their actions speak so much louder than their words, at least if you’re listening.

It would be easy to dismiss any or all of the tiers as being of no danger to the country. Clinton lost two presidential elections in a row (despite what Hulu said in the presser). She’s become a caricature of her former self. The Electoral College has been around pretty much since the beginning of our country. The Dems can’t really hurt it. Except they are reaching for every way to neuter that they can. Then there’s the battle for control of the Party. This is one instance when it’s okay to hope neither side wins.

Except we can’t allow ourselves to fall victim to complacency. That’s what ultimately beat the Dems in 2016 and put Donald Trump in the White House. Now we need to not only work against whoever gains the nomination but those still fighting for it. Biden might be in the lead right now, but Sanders is nipping on his heels. And, as The Federalist notes, “This battle may be Sanders’s last stand, but the war for control of the Democratic Party has just begun.”

Our best solution is to nuke it from space and hope the cancer of socialism is wiped out. The only way to do that is to vote. I can’t believe I’m saying this, but take a page from Clinton’s book and vote for the candidate you think best able to defeat the democratic incumbent. But make sure that candidate is the best one for the job by helping that candidate win their primary. Then help them win the general election by working to get out the vote for November.