Previous post
The Democratic Party and the Battle for the Country 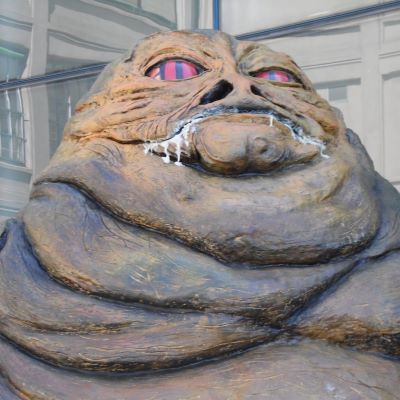 Lest you think Jabba the Jihadi was your everyday, ordinary ISIS fanatic, you would be mistaken.

Sure, Jabba the Jihadi – also known as ISIS mufti Abu Abdul Bari and Shifa al-Nima – did the normal things ISIS assbags do.

Considered by ISIS to be an authority in Quranic law, Bari issued religious rulings, or fatwas, ordering the execution of scholars and clerics who refused to pledge allegiance to the terrorist group when it occupied Mosul, the statement said. He also ordered the July 2014 destruction of a mosque built at the site believed to be the burial place of the biblical prophet Jonah, who once had a notable encounter with a whale.

Maybe Jabba the Jihadi was triggered by the idea of an encounter with a whale, which perfectly justified the order to destroy a historical and religious site. After all, Jabba the Jihadi got his name for a reason.

At nearly 600 pounds, the morbidly obese terrorist couldn’t fit in a security forces vehicle, so they had to heave him onto the back of a flatbed truck after his capture.

Well, maybe not capture. I mean he couldn’t have given much of a chase, right? Harpooning… a large fisherman’s net… put out a tub of gravy and see what shows up…

The comments on social media and on news sites came in fast and furious after the capture of Jabba the Jihadi.

Macer Gifford, a British citizen who fought with a US-backed Kurdish militia in Syria, applauded the arrest and compared Bari to the slug-like gang lord of the Star Wars universe who lived on the desert planet Tatooine.

“I’m delighted to say that the Islamic State’s very own Jabba the Hutt has been captured in Mosul,” he said in a tweet.

“As long as the Devil bastes him properly Shifa al Nima should crisp nicely in hell… He literally looks like the world’s biggest chicken,” Gifford said.

I can’t help but notice the uncanny resemblance, although I may opt for ham next year at Thanksgiving.

I also can’t help but notice that a jihadist group so extreme, that even al-Qa’ida backed away slowly claiming “Dudes, chill. You’re a bit over the top,” and that brands itself as possessing discipline and valuing sacrifice, honors and reveres a cleric who who very obviously consumed a dozen eggs, two small children, and a goat carcass, followed by a dessert of an infidel or two for breakfast daily.

But ISIS has never been known for its integrity and consistency, has it?

After all, ISIS murdered a 15-year-old kid for being gay, while studiously ignoring that a senior ISIS commander took him for his lover – probably at a much younger age. Gay is bad, unless you’re a senior ISIS asshole who rapes children.

So is it any wonder that even though ISIS extremists preach discipline and self-sacrifice and eschew gluttony, they would take religious direction from a dude who looks like Michael Moore hibernating after an all-you-can-eat buffet?

But despite the fact that this gelatinous mass of destructive blubber is terrorist who preached that murder, rape, and destruction in the name of Allah were perfectly OK and who played a major role in the enslavement of Yadizi women, there were still some who insisted that fat shaming was unnecessary!

I admit, I’m not positive whether the few who are complaining about fat shaming Jabba the Jihadi aren’t simply trolling. These days the social justice zealots are so insane, it’s hard to create a parody that would properly reflect their level of assery.

But considering that America’s liberals today will go on a defense of a dead terrorist who was responsible for the deaths of thousands, merely because it was a President they dislike giving the order to dispatch Qassem Soleimani straight to hell, nothing would surprise me.