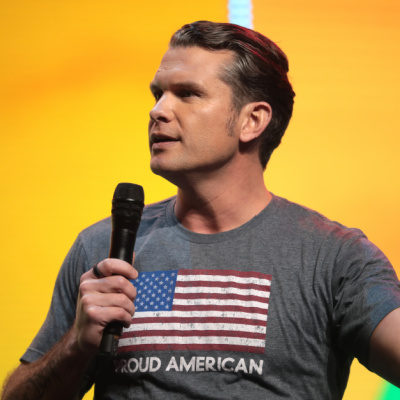 Next post
In the Game of COVID Lockdowns, Blue States Lose Big 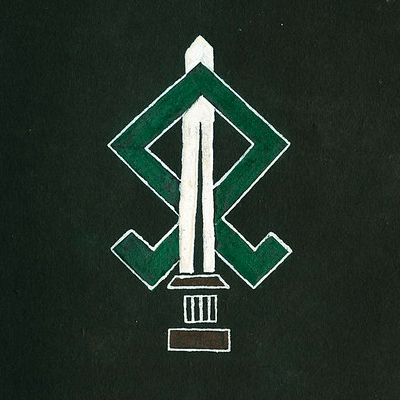 During CPAC in Orlando last week, the Twitter mob flew into a frenzy about the “Nazi” stage design that the group was using. Supposedly the stage took the shape of the “Odal rune,” a Norse symbol that some members of the Nazi party used on their uniforms.

The Anti-Defamation League has also classified the rune as a “Neo-Nazi” or “hate” symbol.

Hyatt Hotels, which hosted the event, went into typical corporate cower mode, and issued this statement:

“We take the concern raised about the prospect of symbols of hate being included in the stage design at CPAC 2021 very seriously as all such symbols are abhorrent and unequivocally counter to our values as a company.”

Translation: We’ll say anything you want! It wasn’t our fault! Just don’t hate us! Pleeeease!

Actress Alyssa Milano — who at this point has said nothing about Andrew Cuomo — accused the Hyatt of “hosting Nazis.”

Well, well, well. Turns out that all that hysteria went to waste. That’s because Design Foundry, the Maryland company that CPAC hired to design the stage, took responsibility:

“ . . .had no idea that the design resembled any symbol, nor was there any intention to create something that did.”

The American Conservative Union, which sponsored CPAC, approved the design. And, according to Design Foundry, it was “intended to provide the best use of space, given the constraints of the ballroom and social distancing requirements.” Plus, according to contract, CPAC had no right to change or dismantle the stage since the firm owned all rights.

What’s more, Design Foundry has worked with CPAC for several years. However, Ian Walters, director of ACU communications, said that they would no longer be working with the company.

“ACU and CPAC have no interest in promoting antisemitism from our stage, whether it’s what happens on the stage or the design of the stage itself. It’s clear that the company we retained designed a stage that has become an unwelcome distraction. As a result, we will not be using that company’s services going forward at future events.”

“Contrary to Hyatt’s own mission statement of inclusivity, your company just attacked its own customer by caving into the pressures of the politically motivated social media agitators who seek to destroy CPAC, our attendees and speakers from across the country, and the millions of Americans who support our work.”

But there’s more to the story. There’s always more when it comes to politics, isn’t there?

Yashar Ali, who writes for New York Magazine and HuffPost, knows the owner of Design Foundry. She’s quite liberal, he tweeted:

1. I know Design Foundry because they handle design for many events in DC for companies like MSNBC & Target. They oversaw the design for the Biden Cancer Summit in 2018. The owner, Annie, is very liberal and was so excited for Biden’s victory. Great work conspiracy theorists.

He continued in a thread:

2. Also worth noting that many of her employees are liberal So many of you decided to go after something without any reporting or knowledge about who was responsible for the design And before you ding her for working for CPAC, you try having an events business during a pandemic.

3. An event design company thats coming up with a stage design does nothing to help CPAC or elevate its status in any way. What it does do is keep people in the event business employed during a pandemic which has destroyed businesses and jobs.

4. And none of you will admit you got it wrong or apologize because in your minds it means you’re caving into Trump. Now an event company, which is a liberal owned and run small business, is associated with a horrific allegation that is based on conspiracies and no evidence.

Folks, I'm liberal Jew with the last name Rothschild who writes about conspiracies and extremism. If the CPAC stage were actually a Nazi rune, I'd be screaming about it.

Instead, I'm debunking it. Because it's not.

Can progressives just stop with their Nazi fantasies? After all, if you look hard enough, you can find Nazi symbols in the strangest places. Some conspiracy theorists point out that the runways at Denver International Airport are arranged in a swastika shape.

Even clothing racks in department stores look like they belonged in the Third Reich, according to some people. 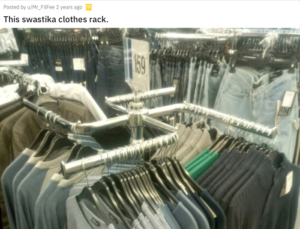 But just because something looks Nazi! doesn’t mean that it is.

So progressives on Twitter beclowned themselves in their hysteria to paint CPAC attendees as Nazis. Then again, it shouldn’t come as a surprise. The old adage from the late Charles Krauthammer explains it all:

But everything is stupid these days. Who had “Nazi stage design” on their Bingo card last weekend, anyway?