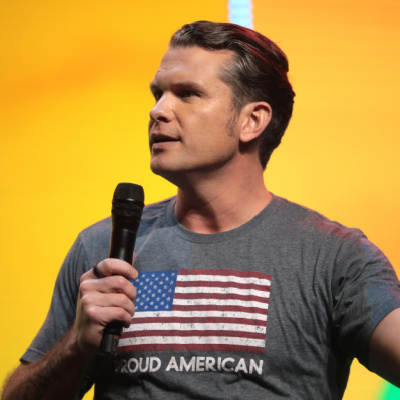 by Toni Williams in media 3 Comments

The big noise at CPAC 2021 was the finale speech by (former) President Donald Trump. Fox & Friends Weekend co-host Pete Hegseth also spoke at the Conservative meet-up and his mention of average folks and the Tenth Amendment led to him getting torched by social media and Liberal talking heads.

If you are not a Fox & Friends fan, you might not understand the reference. For at least the last decade, Fox & Friends has sent a correspondent to a diner around the country to get the pulse of people who are not part of the coastal elites. Long-time host Steve Doocy, Hegseth, Todd Piro or Lawrence Jones will go to the diner and talk to locals about top of mind issues while they eat breakfast. The show cuts to the diner and the convos frequently during the program. Because the shows skews to the Right, most of the diner patrons also skew right.

Pete Hegseth is very popular with the crowd. Although he is a graduate of two Ivy League schools, people don’t hold that against him. While he was an undergraduate at Princeton, he participated in the Army ROTC program, commissioned after graduation and deployed at least three times. He is currently a Major and is Individual Ready Reserve. He has street cred with military families because it doesn’t sound like he was a fobbit. He is quite articulate on Conservative thought.

Donald Trump spoke at CPAC Sunday night, Hegseth was one of the Saturday warm-up acts. He made fun of Ivy League culture and said that when he speaks to average people in the diners, they speak of faith, family, standing for the National Anthem and the Tenth Amendment. Cue scoffing and mocking from the eliterati. Here is the video:

The media and Twitterziens mocked because they don’t think you are smart enough to know the Tenth Amendment:

The powers not delegated to the United States by the Constitution, nor prohibited by it to the States, are reserved to the States respectively, or to the people.

Yes, you are too stupid to understand your Constitutional rights:

His comments immediately prompted pundits and other social media users to question which restaurant Mr Hegseth had visited where all the customers were sitting down discussing the 10th amendment.

“$10 says that if you poll every single person sitting in any given bar, 90% of them cannot tell you what the 10th Amendment says without googling it,” wrote Jill Filipovic.

MSNBC host Chris Hayes said: “Fwiw we led our show last night with the fact the minimum wage is too low and it’s too hard to make ends meet for too many Americans. But maybe that’s more esoteric than the 10th amendment, I dunno.”

I was just saying to the lady bringing me my pancakes. “Man..how about that 10th Amendment?” She was like “right! Federalism is so important to me and my kids futures!”

If these derp potatoes would learn to read something more than a teleprompter, they might know that there is a bill, H.R. 1, that would Federalize our elections and much worse. H.R. 1 violates the Tenth Amendment. It usurps the states’ rights to control elections. You can read H.R. 1 here. The bill has the Orwellian name “For the People Act of 2021”. Other than Federalizing the elections, the bill has a lot of other excrement in it. The bill codifies that no person should ever have to wait more than 30 minutes to vote. The bill also gives candidates $1.00 of public money for every $6.00 they raise.

It limits freedom of speech: The first amendment protects public speech and case law accords the most protection to political statements. While the internet does make broad circulation of ideas easier than ever before, reaching a true mass audience almost always requires spending money. Therefore, restricting money spent on political causes, while perhaps well-intentioned, also restricts speech. H.R. 1 only adds to the labyrinth of laws and regulations that govern spending money on political causes and it should be opposed for that reason alone. It’s through political speech that people can make their views known and can debate with each other. Less money for political speech means that whoever has power already is likely to keep it even if they use it in harmful ways.
H.R. 1 would weaken organizations that are seeking to impact public policy in positive ways: The first amendment applies to mass media organizations, nonprofits and unions, and is the reason any of these groups can speak without any fear of criminal sanction. Profit-making businesses, the lifeblood of the economy, have political rights too. The right to speak freely also involves the right to speak collectively and anonymously. We believe that limiting speech for people or groups we disagree with eventually could open the door to limiting our own speech. As a non-profit organization, the precedents H.R. 1 would set for groups like us would significantly restrict the ability of numerous organizations to carry out critical policy work.
It aims to forbid anonymous speech: Anonymous speech about political matters has played a vital role in America’s history—just ask the authors of The Federalist Papers. Many of those who supported the civil rights movement of the 1950s and 1960s had very legitimate fears of having their identities uncovered. There are many good reasons to speak anonymously and disclosure requirements only harm individuals who support unpopular causes. But sometimes people who support once-unpopular causes turn out to be right. Helping a cause should not require public declarations of support.
It federalizes elections unnecessarily: The Constitution and its amendments make two promises that are sometimes at odds: voting rights can’t be abridged and states should run their own elections. While there should be a strong federal role in protecting the right to vote and election security, the specifics of election administration should be left to the states. This helps good policy ideas spread while bad ones die well-deserved deaths. Decentralization makes the overall system stronger—people intent on disruption have to figure out 50 separate systems—and lets states adopt customized practices, preferences and political systems. H.R. 1 would slash these differences and undermine state autonomy, an important strength of our electoral system.

This bill is a nightmare. So, maybe six months ago people weren’t talking about the Tenth Amendment. But, they are now or should be. Not that the Eliterati think States’ Rights are important. They probably think it is about the Civil War.

Hegseth was right. We deplorables do care very much about the Tenth Amendment.