Chief Best – The Only Adult In Seattle

Chief Best – The Only Adult In Seattle 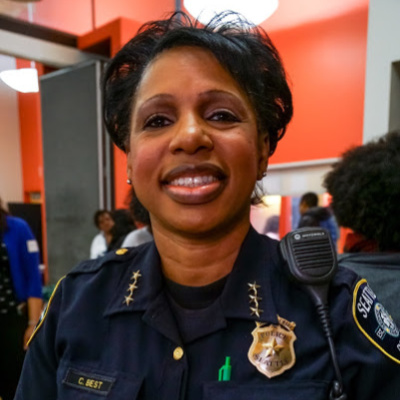 Seattle, Washington has a temperate climate, Puget Sound and a whole of whackadoodles infected with Baizuo. The city’s Mayor Jenny is queen of the whackadoodles. Into this breach, steps one brave woman Chief Carmen Best. Chief Best seems to be the only adult in all of Seattle.

As I discussed in my post yesterday, Baizuo is a Chinese word meaning shallow, left, white thinking. Mayor Jenny allowed rioting and looting to go on while the peaceful protesters tried to get their message out in the wake of the police murder of George Floyd. There is something so racist about thinking that, if African Americans are upset, they riot and loot, when the pictures show a different story. Mayor Jenny allowed rioting and looting and, finally, the takeover of six blocks in the Capitol Hill area of Seattle, which includes the Seattle Police East Precinct. Chief Best was not amused.

Who is Chief Best? Carmen Best is a Washington native and Army veteran. She has been with the Seattle Police Department for 28 years. Mrs. Best worked her way up through the ranks. She has her Masters Degree in Criminal Justice and a long list of other credentials. She worked out of the East Precinct for years. When the last Chief resigned, Mrs. Best was almost overlooked for the position. Black leaders from Seattle went to the hapless Mayor Jenny and Best was added as a finalist and was named Chief of Police.

As My Northwest reported, Chief Best was not in favor of abandoning the East Precinct to the rioters:

In terms of the decision to leave the precinct, there’s been a lot of discussion in the past few days about who made that call. Seattle Mayor Jenny Durkan has said she decided to move the barricade, and Best has stated moving the officers out of the precinct was not her decision.

“It’s kind of a confluence of events,” Best said. “I said it wasn’t me, and it wasn’t. But I didn’t say it was the mayor either. People just assumed that was the natural thing. But what happened was everybody was moving very quickly. We were asked to have a potential evacuation plan, which we created.”

You kind of wish that Chief Best would call out the clueless Mayor Jenny, but she is being politic. Mayor Jenny thinks this is the Seattle Summer of Love. Best is the only adult in Seattle and she needs to keep her job and voice. In the video below, skip to 11 minutes in and watch the side by side comparison of Mayor Jenny and the Chief:

Carmen Best loves the city of Seattle. She has worked as a law enforcement officer in the streets and schools. She is active on boards and community organizations. She wants law and order in her city. She wants the population safe.

The occupied zone of Capitol Hill, formerly CHAZ, now CHOP is out of control, as Best noted:

Call response times in the area normally served by the East Precinct have gone from just over 5 minutes to 18 minutes, Chief Carmen Best said while surveying the boarded-up building Thursday morning that has become the centerpiece for the “CHAZ” movement.

She added secondary calls are taking almost an hour.

“There are people’s lives who are affected,” Best said. “Emergency calls, which often means somebody’s being assaulted, sometimes it’s a rape, sometimes it’s a robbery, but something bad is happening if it’s a top priority call, and we’re not able to get there…”

The CHOPians see law enforcement as the enemy. In Seattle, Chief Best the best friend they have and the only adult on the ground in Seattle.

With so much hate directed at law enforcement officers, it’s nice to take a look at one officer who is in it for the right reasons, has a passion for her work and loves her city.