Next post
Feministing: We Know Nothing About the Military... But Do What We Say!

Meh. Charlie Crist, former Republican governor of Florida and perpetually orange in tan color, is now a registered Democrat. Seriously now… who didn’t see this coming? Especially since he had a high profile speaking slot at the Democrats’ Convention this past summer? Some are even saying this latest party affliation conversion of Crist’s is just the first move in a highly anticipated announcement that he will run for governor again trying to unseat Republican Rick Scott in 2014. YAWN.

As far as I’m concerned, Charlie “I’m Orange” Crist is the poster boy for why politicians are considered lying, dishonest scum bags only interested in promoting themselves while squeezing the life, liberty, and pursuit of happiness out of We the People. So he became a democrat. He’s still unpopular. Good luck with that governor’s race Charlie. DLTDHYOTWO. 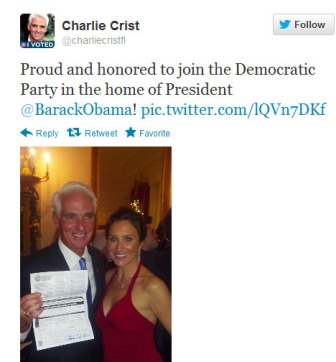 Teach at Pirate’s Cove is blogging about Jim Geraghty’s plan for blue states to pay their “fair share” in a blog post called “Soak The Blue State’s Fiscal Plan″. Go read it.

The Other McCain has up a great blog post on the hating and missing of Andrew Breitbart. It’s a must read.

Phineas at Sister Toldjah is remembering Pearl Harbor – then and now.

Professor Jacobson at Legal Insurrection has up a post on “The progressive deification of Elizabeth Warren has started”. Unbelievable.

Emily at NakedDC has a blog post up on Former Congressman Alan Simpson putting an end to Gangnam Style. Um, thank you sir.

Quickly turning into one of my favorite blogs, The First Street Journal has a post up about infamous Rule 5 in blogging — Haute couture!

Jammie Wearing Fool has up a great blog post on how the Union Goons reacted as Michigan became a Right-to-Work State. I’m sure you can imagine.

Jim Hoft at Gateway Pundit has up a post on “Terror Leader Mashaal: Hamas Will Never Recognize Israel”. Go read it.

Dan is blogging at Reihl World View on “Jennifer Rubin’s Moronic Blathering Smearing Heritage and DeMint”. It’s a must read too.

A good post is up by Jonn on the defacing of the Iwo Jima Memorial at Quantico at This Ain’t Hell blog.

Aunty Brat at Assoluta Tranquillita has an amazing post up about Eleanor Roosevelt and Pearl Harbor. It’s a must read!

Michelle Obama’s Mirror has up a fun post called “It’s an honor just to be nominated. I’d like to thank my dog…”. Go Read. Now.

Instapundit has a lot of good blog reading up including FIVE NEW ADDITIONS to the Habitable ExoPlanets Catalog. LOL.

Erika Johnsen is blogging at Hot Air on “America’s energy boom: To be, or not to be?”. She has an interesting graph demonstrating oil and gas extractions over the last twenty five years.

neo-neocon has up a number of good posts today but the “Obama: “I won’t compromise on taxes” is a must read!

and finally, Andy at AofSHQ has up an Open Thread on Season 4 of Justified – which starts January 8th.

Have a wonderful weekend!