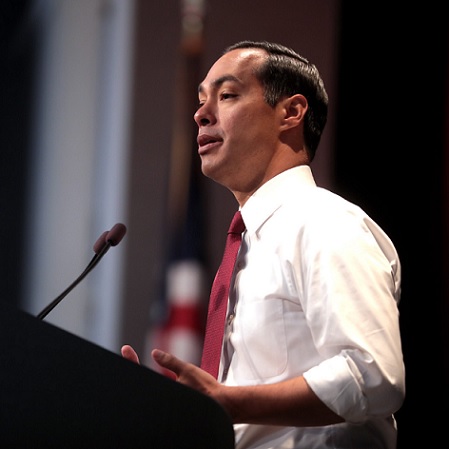 Admit it, you were sitting around anxiously waiting to see who former HUD secretary and presidential primary dropout Julian Castro was going to endorse in the Democrat primary. Well, your waiting has been rewarded with an Elizabeth Warren endorsement!

Elizabeth and I share a vision of America where everyone counts. An America where people⁠—not the wealthy or well-connected⁠—are put first. I'm proud to join her in the fight for big, structural change. pic.twitter.com/xDvMEKqpF3

This will signify a massive shift for all 50 of Castro’s primary donors, I’m sure. It’s not like he has much to offer in the way of support, as at best he was clearing a whole whopping TWO PERCENT in the polling data.

That’s not going to stop Warren from eagerly accepting whatever endorsements she can get, especially one that offers her a little bit of that sweet, sweet intersectional cred that the whitest woman in the primary so desperately needs.

Thank you, @JulianCastro! You’ve been a powerful voice for bold, progressive change and I’m honored to have your support. Together, we'll fight to make sure every single family in America has a path to opportunity. https://t.co/uHs7DP4DcU

The news marks one of the Massachusetts senator’s most high-profile endorsements to date, coming just weeks ahead of the Iowa caucuses and at a moment when her political momentum has slowed. Castro, who served as secretary of Housing and Urban Development under President Barack Obama and was formerly mayor of San Antonio, Texas, will appear with Warren at a campaign rally in Brooklyn, New York, Tuesday night, a campaign aide told CNN.”

What will be the real impact of this endorsement of Warren by Castro? Well, there are a couple of things probably at play here.

First, Castro is definitely putting his far-left cards on the table now, as if his radical positions hadn’t already made that crystal clear. Supporting Biden would have seemed like a natural extension for someone who was part of the Obama cabinet. That Castro is eschewing Biden in favor of Warren makes a statement in two ways – that Biden is not hard left enough for the base, and that the Obama “crowd” isn’t feeling the “Joementum,” as it were. We know that Obama himself has reportedly talked up Warren with nervous Democrat donors, which has got to sting for ol’ Joe, who invokes the name of the holy Obama repeatedly as his justification for running, but has gotten no love in return.

Second, Castro knows that Warren needs minority support. He gets the fanfare and news coverage for having endorsed her, and it automatically puts his name into the short list of vice-presidential candidates – which is where his presidential campaign was headed this entire time. Warren has definitely backslid in the polls, and while she will get no actual support bump from a Castro endorsement, she will get some media buzz. The positive coverage benefits both Warren and Castro, even if she can’t gain in the polls and he now is seen as a Warren supporter.

In the long term, though, it means that Julian Castro’s elected political career may be over. Endorsing Elizabeth Warren is not going to play well in Texas, especially for a state Democrat party that is trying to regain a foothold in light of so many GOP congressional retirements. Warren’s plans have made her a risky bet for the Democrat rank-and-file (otherwise Obama would not be soothing nerves behind the scenes for her), and by attaching himself to her campaign, Castro will be making himself pretty unelectable statewide. He may still be able to score another cabinet appointment in a future Democrat administration, or perhaps be vice-president, and he’s definitely not in Beto territory, but it won’t make him look moderate enough to elect in Texas.

Only time will tell if this endorsement produces significant political consequences, but as the polls stand right now, Warren is sinking and Castro’s life preserver is too small to actually float the campaign back up in the polls.