Oh, I know he’s going to call “horseshit” on this news, but the Inspector General for the Department of Homeland Security released a devastating memo today:

“The Obama administration broke the law when it released thousands of illegal immigrants, more than 600 of whom had criminal records, last February as a result of poor planning and micromanagement from Washington, according to an internal audit released Tuesday that says things have not improved in the 18 months since.

Obama broke the law?  In other news, water is wet.  This is almost getting boring, writing post after post about Obama and his disdain for the law.  And the Constitution. And his Oath of Office.

More about the just released report from the fearless Sharyl Atkisson:

“The report provides a scathing portrayal of budget mismanagement and flawed processes at the highest levels inside the nation’s immigration enforcement agency.”

“When the media and Congress began asking questions about the controversial releases in February and March of 2013, the IG says ICE executive leadership rushed answers and, in doing so, gave “inaccurate” information to Congress and the public.”

In March 2013, when the Associated Press reported the administration had released more than 2,000 immigrants over a three-week period, Homeland Security Chief Janet Napolitano stated the AP story was “not really accurate” and that it had developed “its own mythology.”

During the three weeks leading up to sequestration, from Feb. 9 to March 1, ICE released 2,226 immigrant detainees—617 of whom had criminal convictions. Approximately 1,450 were freed the last weekend before sequestration. The field offices that released the most criminal convicts include Phoenix, Houston, Atlanta and Chicago.”

Then this little gem from Ms Attkisson’s report caught my eye:

Ponder that figure of “$122 per bed” the next time you check into a Holiday Inn. With a coupon.

So. We had at least 600 known and convicted criminals illegally released into in our general population.  And that’s just from 2013.  Think of how many are pouring in right now.  Along with all the free range terrorists and Isis charmers that are bringing their particular fondness for beheading children with them.

Any questions about the golfing SCOAMF?  And if you don’t know what that acronym means, Google it.  It fits. 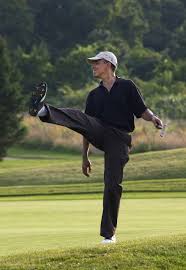