Next post
DHS Disinformation Board Will Wage War On Free Speech 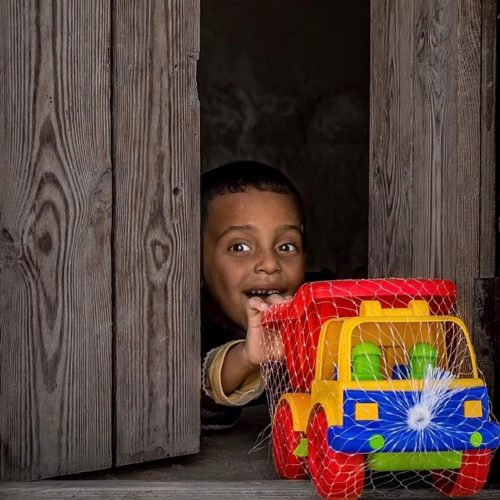 And so it seems that we can no longer say “boys will be boys” without some looney parent getting triggered. Take a guy named Jay Deitcher, for instance.

Jay, whose Twitter handle is “The Legendary Commander Kvetch”, is a self-proclaimed stay-at-home, co-sleeping dad. Jay is also the author of this piece that garnered lots of attention, from Conservative commentators such as Matt Walsh a few days back. The title? “I wanted my son to reject masculine stereotypes. Then he fell in love with tractors.”

After turning 2 years old, my son, Avishai, started demanding that he only wear tractor shirts, and my mind spiraled into darkness. I catastrophized worst-case scenarios, imagining a world where he fell for everything stereotypically manly. I envisioned him on a football field, barreling through mega-muscled opponents. Imagined him waxing a sports car on a warm summer day. I have always judged other guys who seemed boxed in by masculinity, but 3 ½ years ago, when I became a stay-at-home dad, my bias skyrocketed.”-Jay Deitcher

The Kvetch goes on. Deitcher commented on how his wife mentioned she felt, as a mother, that she had a closer bond with her son than he did. This comment caused Jay, as the story goes, to “create a bond stronger than any parent had ever achieved, but…” (he told himself) “to do so he needed to distance himself from anything deemed masculine.”

So, he quit his job, started dressing their son in genderless colors and clothing, bought the kid baby dolls to wheel around in a stroller at the park, and shoved a onsie with footballs on it that his mother-in-law bought for her grandson in a closet to never be found again. Why? Because men are “inept as parents”, men don’t hug. Men don’t say “I love you”. Men are aggressive. Men drive trucks. Where did Dietcher get this from? Who knows? He grew up in a loving family unit. But he wanted to push the boundaries of the gender stereotype of men and display these anti-manly-man characteristics to his son in the hopes that his boy would not become a “guy who wears plaid”. Dreadful.

Then, came the TRACTORS! For a person “whose body spiraled into panic any time he attempted manual labor” this must have been a day for the books in his household. Oy. To never have to hang a picture frame ever again! And now the boy likes TRACTORS! So much for progressive parenting and blurring those gender lines! But, you see, I’m just a manly-man (woman) spewing hate and ripping on his “dope lines”:

I'm loving when they pull quotes from my essay. Confirms which sentences were dope lines.

More like dopey lines, dude. But it seems as though the Legendary Commander Kvetch (who is also a WWE fan), does not like the criticism he’s received for this much-anticipated essay he penned for Today:

So many big manly men are being triggered by my essay. They are clearly very confident in their identity. That's grit.

Here’s a newsflash for ya, Jay-manly men do not get triggered. And, I assure Mr. Deitcher that there are other things in this world parents worry about. Things that pale in comparison to his concern over raising a boy in a toxic, manly world. So, here I go with some triggering statements about boys-more specifically, my own.

When our son was born, he was a little over three pounds. My husband and I held him in the NICU and did “kangaroo care”-giving him equal time with us chest-to-chest to be close to our heartbeats. There was never a point in time where either one of us made the other feel inadequate about our parental roles or the bond with our son. My heartbeat was not superior to my husband’s in these critical moments. I knew from the get-go when he urinated during every ultrasound and came out kicking, screaming (praise God, breathing on his own) and peeing all over everybody that our son was all-boy. We decked his room out in retro airplanes and I still have his tiny, little New York Jets onesie that my uncle gave him with pride. He loved his collectible zombie figurines and his Hot Wheels. I know, the sheer toxicity of it all.

When he was a baby, we did not cower in fear about him being a guy who drives a truck, who washes his car or wears plaid. We feared for more legitimate things as he was premature. Will he be healthy? Will he have a normal life? Will he catch up cognitively and developmentally with his peers? We wondered if we would ever get him to sit still long enough for potty training to take. We worried about his sensory processing. We worried about his speech delays. We tried soccer, martial arts and breakdancing-to name a few activities. Nothing seemed to stick. We backed off in the awkward 6th grade phase.

Then came 7th grade. We encouraged him to try a sport. He went for one of the hardest sports there is-wrestling. And, as a mom, I will say, those first few years were rough. But the lessons and the character this sport has taught him have been amazing for his development into the young man he is today. He is almost a junior in high school and continues to wrestle and enjoy the camaraderie with the other boys on the team. These relationships have been key over the past two years during lockdowns. He is athletic, a bit of a preppy (the irony of this is not lost on his mom who had purple hair at his age). He likes his Carolina blues, his greens, an occasional Camo print or an American Flag and his Polo and Hilfiger. He also (GASP)…drives a TRUCK! The truck, by the way, we purchased from his great-grandmother who was quite the pioneer (who hunted and fished on her own) herself. He stays away from the high school drama, is even-tempered, gets great grades and is not afraid of manual labor and hard work. In fact, he’s hoping for some of it this summer to earn some money. He is also quite goofy at times and still prides himself of burping in sentences and stinking up the car after a sweaty practice. He is, the all-American boy.

The left will paint this as something not to be proud of. As “toxic” and “stereotypical”. What they won’t see is the way he cares for our two cats and how tender he is with them. Almost to the point of ridiculousness, sometimes (he never had a baby doll but caring for animals has been proven to develop empathy in studies). What they won’t see is the way he is fiercely protective of his mother (I get text messages from him checking in on me daily). They won’t see that he still likes to rest his head on my shoulder during a long flight and that he always says “I love you” to me and my husband. They won’t see his loyalty to his best friend since third grade. They won’t see him puttering around the kitchen trying a new recipe he found on YouTube for dinner or making his amazing chocolate torte. According to the left, unless you follow their wacko agenda, you will be raising your boys to be toxic douchebags.

Better to be raising theybies, I guess. Better yet, let’s give birth to them and let their Kindergarten teachers tell them what gender they should be. Take it out of the parents’ hands completely. Host a Drag Queen Story Hour or better yet, just plop them in front of Disney Plus. They’ll be chanting LGBTQIA before their ABCs! A woke win.

These are true definitions of first-world problems. If you think about it, true privilege in a nutshell. When a man can boast about being a stay-at-home dad and muse from a comfortable home in Upstate New York in an essay about how they hated manual labor, cringed at the sight of shirtless guys shining the wheels of their Ford F-150s, and shoved a onesie in a closet because it had footballs printed on it and call all of this a problem, it’s laughable, really. Woke parents can try all of the strategies they can in child-rearing but the harsh and unavoidable truth is, that in most cases, boys will be boys. Get over yourselves. Stop kvetching. Let them roll around in the mud, wear the football jersey or dreaded plaid and play with tractors with reckless abandon.