Next post
Iranian Navy Seizes Commercial Ship, But Will the United States Respond?

Baltimore, the birthplace of our National Anthem. A city of history and charm. Not anymore. The Southern Baptist Senior Citizens Center, and a  CVS Pharmacy looted and burned, police vehicles torched, 15 police officers injured and hospitalized after being attacked, and the Baltimore Orioles game postponed. All of this happened yesterday and last night because of gang bangers, rioters, and so-called “peaceful” protestors. 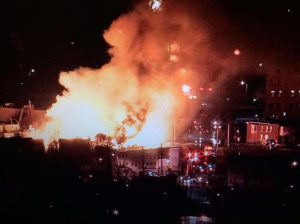 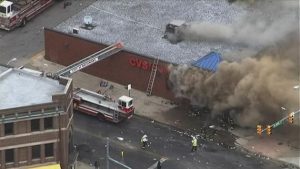 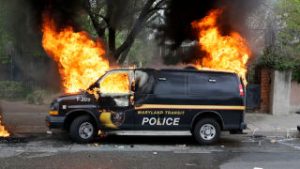 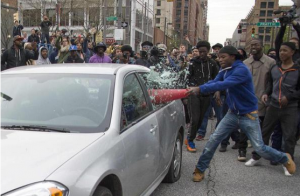 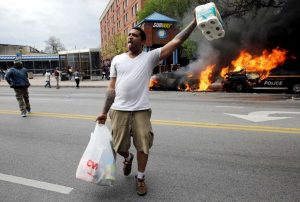 If anyone can HONESTLY look at those photos, read the news reports and then tell me that the violence and destruction inflicted on Baltimore and its citizens is a natural consequence of Freddie Gray’s death; then you need your head examined. What is happening in Baltimore is as shameful as the events that took place last fall in Ferguson, MO. There was no excuse for what happened in Ferguson; and there is ZERO excuse for the actions of the “protestors” and gang bangers in Baltimore now.

Unfortunately that isn’t stopping the idiots such as Baltimore Mayor Stephanie Rawlings-Blake who, rather than issue a plea for calm and admit that her providing of “safe spaces” to the protestors was a mistake; insisted that the media quoted her wrong, issued a city-wide curfew, and decided that the protestors are now thugs who took advantage of her goodwill:

Remember when Al Sharpton rode in to save Ferguson, MO?  He got lots of camera time, rambled on during his so-called “eulogy” at Michael Brown’s funeral, and then disappeared. Now he needs more $$ to pay the IRS so he’s decided Baltimore needs rescuing…or something:

“I have been asked by many in the Baltimore area since day one to get involved in the justice for Freddie Gray movement. Though I have discussed it on my daily radio and TV shows and been in touch with our NAN Baltimore chapter, I resisted personal involvement until we saw what the promised May 1 investigation report would bring.

I am saddened and disappointed that there now may not be a report released on May 1. It is concerning to me that a deadline that the police themselves had set and announced they have now conveniently changed. Therefore, I will come to Baltimore this week at the invitation or Rev. Westley West, who has led vigils daily there, along with local clergy, and morning radio show host Larry Young who has headed our Baltimore chapter of NAN for the last decade.

It is my intention to come and have a meeting with grassroots activists and faith leaders to schedule a two-day march in May from Baltimore to Washington. The march will bring the case of Freddie Gray, Eric Garner, Walter Scott, Eric Harris to the new Attorney General, Loretta Lynch. Ms. Lynch, in her new role that we all supported, must look and intervene in these cases. Justice delayed is justice denied.”

Hey Sharpie?? I have a question for you. When the Ferguson Grand Jury report came back with no charges against Officer Darren Wilson, and it became clear that Micheal Brown was indeed a criminal, where were you? Oh that’s right, for once you kept your mouth shut because well, the reality didn’t fit your make-believe narrative. I think its REALLY interesting that Michael Brown is nowhere to be found in your press release. Sharpie? If you want to ride to Baltimore’s rescue, will you call out the protestors and tell them to get off the streets and go home? Will you speak publicly about Freddie Gray’s police record? Yeah, I didn’t think so. But then again, I didn’t expect you to. And you’re in good company with the Mayor of Baltimore and with other idiots out there. Sally Kohn is one such fine example:

Here’s a little perspective for Sally (she of the politically correct crowd), for Al Sharpie, for Mayor Rawlings-Blake, and for ANYONE else who thinks this violence and destruction is justified. It solves nothing. It gains nothing. That those three and far too many others encourage this kind of crap speaks volumes about their willingness to justify wrong rather than standing firm for what is right, good and honorable in this world.

Meanwhile, Maryland’s Governor Larry Hogan isn’t pleased with how long it took for Baltimore’s “safe spaces” Mayor (emphasis added in the quote) to get a clue:

GOV. HOGAN: We declared state of emergency and I issued the executive order less than 30 seconds after requested by the city of Baltimore. So didn’t take us very long at all. I signed an executive order almost immediately as soon as we received the call and called the president. There was no delay whatsoever. We’ve had this emergency operation center activated since Saturday. We’ve had hundreds of state police on the ground. We’ve had every single state agency and local agency coordinated out of this operation already for the entire week. I‘ve been in daily communication with the mayor and others in the city and our entire team has been involved from day one. Frankly, this was a Baltimore city situation. Baltimore city was in charge. When the mayor called me, which quite frankly we were glad that she finally did, instantly we signed the executive order. We already had our entire team prepared. We were all in a command center and second floor of the state house in constant communication and we were trying to get in touch with the mayor for quite some time. She finally made that call and we immediately took action.

The Governor of Maryland, along with myself and many others such as Fox News Richard Manning, have had enough. While Baltimore’s mayor trots out more excuses, our Mulligan President passed the buck to the newbie Attorney General.  Here’s a question: what would Hillary do about this mess? Oh I know! She’d institute a new style of “empathy” policing for the protestors, and then delete all communications from both her private and public servers.

Our Republic is in jeopardy. What is happening in Baltimore is tragic and yet could’ve been prevented on many levels.  However, when the Duffer in Chief chooses golf over leadership, a presumptive candidate for President believes therapy sessions from her Scooby Van will do the trick, the mayor of Baltimore ties the hands of the Baltimore police with her “safe space” crap, and idiots such as Rachel Maddow worry about the protestors “safety”; a fine city that was witness to the events that led to the writing of our National Anthem, implodes. As with Ferguson, it will get worse in Baltimore before it gets better.  I fear for our country, I really do.