Next post
DACA Back From Dead Thanks To Courts 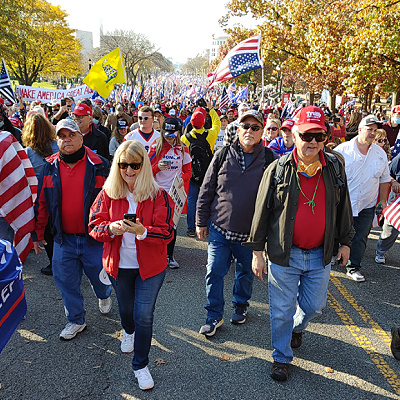 Victory Girls is here in Washington, D.C. to capture the flavor of rallies, both the Million Maga March and Walk Away, in support of President Donald Trump and his efforts to support our Constitutional right to a free and fair election. Judging from the streets surrounding our hotel and the lobby, this is going to be a Maga weekend.

Freedom Plaza is the place and noon is the time for the Million Mega March, the first scheduled MAGA event. Every newscast warned to be wary of violence. Right? Have they been to a Trump rally? The crowd actually began assembling the night before at hotels all around D.C. At the J.W. Marriott, the crowd was from all over the country. California, Florida,Georgia, Utah and Tennessee were all heavily represented. I was safely in my room, but the word is that many MAGAts stayed up until one or two in the morning enjoying patriotic fellowship.

The Million MAGA March was scheduled to start at noon. By nine, Freedom Plaza was rocking. No matter what the media will tell you, there were no shouts to overthrow the government or any thing like that. The crowd chanted “four more years” and “count all the legal votes”. We sang “God Bless the USA!”.

What really got the crowd going was when President Donald Trump drove through on his way to golf:

Do not DARE let the media tell you the crowd was angry or small. I was in the middle of it all. I heard joy and patriotism. I heard a demand for the integrity of our elections. There were calls not to recount the vote, but to audit the vote. The Proud Boys showed up. They minded their own business and, once again, did nothing wrong.

It’s hard to judge the size of the crowd, when you are in it. Dan Scavino tweeted out this photo:

I had no idea. I was upfront, near the stage. From Freedom Plaza, the Million Maga March moved up to the Supreme Court of the United States. That’s when I took the image featured at the top of this post. I looked back and there were thousands and thousands of people. I was in the middle of this crowd. There were thousands and thousands of people in front of me. I want you to remember. Every person in that crowd paid their own way to the Million Maga March, left loved ones and work to rally around our President.

Victory Girls will be at the Defend Democracy Rally at John Marshall Park tomorrow morning. Brandon Straka is headlining this one. Will let you know the details tomorrow evening.

As I finish this up, there are multiple reports of Trump supporters being attacked. Nina will handle that in the morning. I am staying up in my sky high retreat.