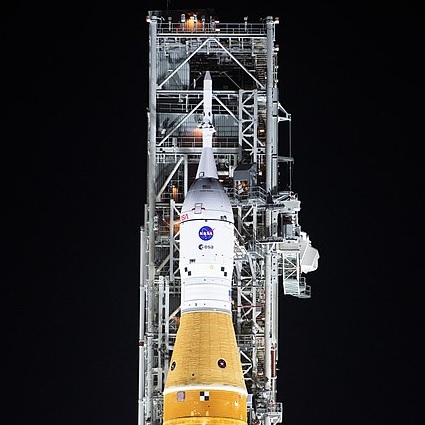 During the 1960’s, the United States set itself a singular and historical goal: go to the moon. Once we did that, we stopped. Now there is an entire generation that barely knows what real space exploration is like, and we are all worse off for it. Changing that begins today, with the launch of Artemis 1 mission.

Space superiority has been important to national security ever since the Soviets launched the first Sputnik satellite. While we ended up winning the Cold War race to the moon, we then stopped going because budget cuts came for NASA once the initial moon goal was reached. We then spent decades using space shuttles, while technology on Earth grew in leaps and bounds. Our presence in space has currently been reduced to the International Space Station, and even the ISS’s survival looks shaky with the diplomatic tensions between the United States and Russia. The technology to get to space itself has improved with SpaceX rockets making the trips for NASA up to the ISS, but if we want to stay one step ahead of Russia and China (and the Chinese are building their own space station), that means going to the moon again, and then going even further than any human has gone before.

And while going back to the moon with the Artemis program won’t shut up those who enjoy being conspiracy theorists for fun and profit, it will definitely make them easier to ignore.

So, what is the point of Artemis 1? This mission is going to be unmanned, and is basically a repeat of what the Apollo program did before landing on the moon, both for proof of concept reasons and to try something else.

The uncrewed Artemis I mission, including the Space Launch System Rocket and Orion spacecraft, is targeting liftoff on August 29 between 8:33 a.m. ET and 10:33 a.m. ET from NASA’s Kennedy Space Center in Florida.”

Although there is no human crew aboard the mission, it’s the first step of the Artemis program, which aims to return humans to the moon and eventually land them on Mars.”

The Orion spacecraft will enter a distant retrograde orbit of the moon and travel 40,000 miles beyond it, going further than any spacecraft intended to carry humans. Crews will ride aboard Artemis II on a similar trajectory in 2024, and the first woman and the next man to land on the moon are slated to arrive at the lunar south pole in late 2025 on the Artemis III mission.”

Once the launch has occurred, NASA will conduct a post-launch briefing, and later in the day, the agency will share the first Earth views from cameras aboard the Orion spacecraft.”

Orion’s journey will last 42 days as it travels to the moon, loops around it and returns to Earth — traveling a total of 1.3 million miles (2.1 million kilometers). The capsule will splash down in the Pacific Ocean off the coast of San Diego on October 10.”

If the idea of space exploration doesn’t get you excited for the sheer adventure of it, consider this. The Russians and the Chinese would love to go to the moon themselves. Do you think that if they could, they would go to the moon, go to the Sea of Tranquility, and smash up the landing site of Apollo 11 just to kick us in the teeth? The way to avoid that? Get there first again, and keep going back. And then prepare for Mars. The only way to ensure that our enemies don’t use all the room up there in space against us, is to be right up there with them.

Now, because this is NASA, and they apparently aren’t convinced that huge rockets and going into space is enough to lure in the average American, they just can’t help bringing in the celebrities.

On launch day, a live broadcast of the festivities includes celebrity appearances by Jack Black, Chris Evans, and Keke Palmer, as well as a patriotic performance of “The Star-Spangled Banner” courtesy of Josh Groban and Herbie Hancock. Then we’ll hear “America the Beautiful” played by The Philadelphia Orchestra and cellist Yo-Yo Ma, conducted by Yannick Nézet-Séguin.”

Is this really necessary, NASA? I will concede that having Jack Black, whose late mother was a NASA engineer, is a nice touch, but why everyone else? I know why – it’s because we, as a society, have become so shallow and celebrity obsessed that nobody under thirty is going to retweet or repost a rocket launch unless Captain America gives it the thumbs up. But hey, at least Kamala Harris has something to do as chair of the Space Council, right?

May God save us from any more cringy videos starring Kamala Harris and child actors raving about space.

For those who are interested, the official NASA livestream can be viewed here:

The launch window will only last for a couple of hours, and while weather could be an issue, the Artemis 1 mission is preparing to launch as if the weather will cooperate.
https://twitter.com/nasahqphoto/status/1564021025381449728
You don’t have to be a kid raised on Star Trek (as I was) to enjoy the awesomeness of a rocket launch. And you don’t even have to believe in space exploration. All you have to believe is that the United States can build a bigger and better rocket than the Chinese or the Russians, and we’re going to watch that rocket go up and prove it. Godspeed, Artemis 1.

UPDATE 9:30 AM EDT
The launch has been cancelled for today, due to an “engine bleed.”

The launch of #Artemis I is no longer happening today as teams work through an issue with an engine bleed. Teams will continue to gather data, and we will keep you posted on the timing of the next launch attempt. https://t.co/tQ0lp6Ruhv pic.twitter.com/u6Uiim2mom

Obviously, this looks a little embarrassing, but better a scrubbed launch than an explosion.

“Launch controllers were continuing to evaluate why a bleed test to get the RS-25 engines on the bottom of the core stage to the proper temperature range for liftoff was not successful, and ran out of time in the two-hour launch window,” according to an update from NASA. “Engineers are continuing to gather additional data.”

The launch team still needs to troubleshoot the engine issue and will keep the rocket in its current configuration to gather data and assess what needs to be done. Both the Space Launch System rocket and Orion spacecraft, sitting on Launchpad 39B at NASA’s Kennedy Space Center in Florida, remain stable, according to NASA officials.”

The next possible launch window would be on September 2nd.