Next post
WaPo: It's Trump's Fault That Joe Biden Has A Ukraine Problem 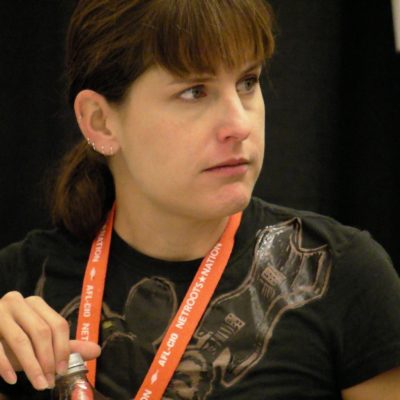 by Lisa Carr in holidays 18 Comments

Amanda Marcotte of Salon‘s holiday ramblings have been extremely angry as of late. From Marcotte’s November column, basically calling Trump the Grinch who stole Christmas, to one she penned just this past Monday calling Christianity “white identity politics”, we’re not exactly sure where to begin with the crazy that comes out of this woman’s mouth. We know she hates Christian men.

I’m not saying the above referenced men are the perfect Christians. Who is? But let’s start with how President Trump ruined Christmas for her. Even though Amanda is a self-proclaimed atheist, Trump (and the Christians who support him) ruined any inkling of her desire to celebrate the holiday in a secular sense:

Forget Tiny Tim declaring, “God bless us, every one!” It’s clear that for that 40% of people in the Trump cult, it’s closer to “Damn anyone to hell who isn’t exactly like us!”-Amanda Marcotte, Salon

For years, Fox News has been hyping the annual “War on Christmas” lie, falsely claiming that “liberals” have banned saying “Merry Christmas” or other expressions of Yule-specific cheer. But Trump and his minions have taken this lie and pumped steroids in it. Now it has morphed into something even uglier, a way to imply that the point of Christmas is to declare white supremacist America as the only “real” America and to tell everyone else they can go hang.”-Amanda Marcotte, Salon

In her most recent insane rant, Amanda Marcotte whines about the onslaught of “Merry Christmas” greetings she received after publishing her hateful piece of tripe. Now, all of a sudden, she is a victim of “white identity politics” (AKA Christianity):

The principal harassment strategy was to track me down on social media, even on my Instagram feed, and flood it with “Merry Christmas” messages — from white male strangers — to taunt me for my personal grief. It’s particularly interesting that this was the weapon of choice. These people are taking what they supposedly believe is the birth celebration of their lord and savior and using it as a hurtful weapon.

My experience is hardly unique. Stirred by years of Fox News lying to viewers and telling them that liberals are somehow trying to take Christmas away, conservatives have increasingly embraced the phrase “Merry Christmas” to mean, basically, ‘F**k you’ to anyone that they’ve deemed less than legitimate Americans.”-Amanda Marcotte

In the so-called fictitious “War on Christmas”, Marcotte declares war on Christmas by implying a simple “Merry Christmas” wish is just a way for white people (men, specifically, in her case), to strong-arm their way into telling a person who they deem “lesser” that they are indeed the “dominant” tribe. An atheist who has never really been bothered by Christmas and the Christmas spirit before, is all of a sudden aggrieved after she took it upon herself to spew her toxicity all over the Internet. Now she is mad because people are defending their holiday of celebration. Like a Jewish person defends Purim. Like a Muslim defends Ramadan. Once again, it is not okay to blast other religions or faiths but Christianity is fair game when attacking the”40% of people in the Trump cult, who say ‘damn anyone to hell who isn’t exactly like us.'” And when someone tries to defend Christmas after a liberal atheist baboon flings poo at them, they become the “hateful white supremacist” who is supposed to be kind to their fellow man-ahem-woman-ahem-whatever. They become the reason why our country is so f*cked up.

This is what people like Marcotte sit around and stew about over the holidays. Amanda Marcotte is a woman who clearly thinks she the more superior and educated human being because she doesn’t believe in God like some middle-American Trump voters and she attempts at every turn to question Evangelical Christians who support Donald Trump. She attempts to equate the holiday with Donald Trump. Now who exactly is giving Trump a god-complex here? Marcotte thinks she is above all of those “uniformed rednecks” in podunk little towns. Some of these podunk folk are her very own relatives whom she chooses not to visit anymore because it’s way too inconvenient to get to the Texas town in the middle of nowhere and hanging with them is bad her image, I guess. I say good riddance for those family members!

I was once a college liberal who tip-toed around the “Merry Christmas” sentiment. I continued to be this way throughout my 20s and gradually started coming out of my indoctrinated stupor in my 30s. The defining moment for me was one early Christmas morning fourteen years ago when I awoke from a sleep in an operating room that I did not know for sure I was going to awaken from. I learned that our baby was alive and healthy after an emergency c-section. I freely say “Merry Christmas” now because of the sheer humility and joy I felt on that day-and every Christmas Day afterward. When a stranger says “Merry Christmas” to me, I light up. Because I think about those moments and that time when life hung in the balance and God spared my child and me. (By the way, Amanda, Lord and Savior is capitalized.) This has NOTHING to do with who is in that Oval Office. It never had anything to do with who is the current President of The United States. Uttering “Merry Christmas” is not my way of saying “f*ck you” to an atheist but if that’s how he or she takes it when they’re at a Christmas party eating cookies, doing Dirty Santa gift exchanges and wearing ugly sweaters, that is not my problem. It’s theirs.

This is not to say that I do not respect others who may not possess my faith and/or political beliefs. I have friends who are Jewish and I’ll say “Happy Hannukah”. I don’t strong-arm them into a “Merry Christmas”. Perhaps if Amanda Marcotte thinks she is being strong-armed into a “Merry Christmas”, she should do some soul searching as to why she feels this way. “Because, Donald Trump” is a lame-ass, cop-out excuse. There are some mental issues here that this crazy moonbat is not addressing. In the meantime, let’s not strong-arm Amanda Marcotte into a “Merry Christmas”. Let’s enjoy the remainder of the holiday season with people and things that bring us joy and not let anyone steal it. Sure, her sentiment may prompt people to think Amanda Marcotte, thief of joy, needs a little Christmas, right this very minute. Or she just needs a “f*ck you”. Instead, pray for her Godless soul and Godless well-being because evidently, if this is what the writers at Salon sit around in their flats in Brooklyn thinking about during the holiday season, Amanda and her “tribe” need it. Next up: Amanda’s rant on the fascism of Hallmark movies. You may think I’m kidding. I’m not.