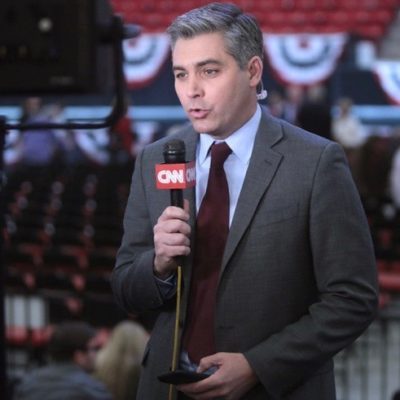 Journalists say the darnedest things. Jim Acosta is no exception. And he has some deep thoughts. Who is the terrorist now? Take a look.

As Acosta reads from his teleprompter, Jim Acosta suggests that perhaps Jim Acosta can focus on more than Jim Acosta for just a few minutes.

“For a while, there weren’t two realities, two Americas. Generally, we knew what happened that day. We knew what needed to be done. Somewhere, its hard to pinpoint exactly when, we lost our way.”-Jim Acosta

You think, Jim? Acosta goes in for the kill shot…

“We turned away from Afghanistan and invaded Iraq. We had a financial crisis that almost triggered another Great Depression, highlighting vast inequities in our society.”-Jim Acosta

“But something else happened to us. We let hate into our hearts for each other. We live in separate worlds now. We don’t agree on the same facts. We can’t even agree on wearing masks or getting vaccinated to end this pandemic. Maybe we should put the virus on the list of most wanted terrorists in this country. It’s a war, let’s win it.”-Jim Acosta

Yep. He said this. COVID is terrorist number one. A virus covered in 19 spike proteins is on the terrorist watch list in Jim Acosta’s world. Not the lab it came from. Not the country it originated in who kept things under wraps and has never been transparent with us as a nation. Not the health officials on our own soil who knew about this and spread lies to the American people which have been largely responsible for this great divide. Not the media who continued to spread disinformation to confuse and divide people. Yes, this includes you, Mr. Acosta.

“Our divisions have exposed a different vulnerability than the one exploited on 9/11. We appear to be capable of destroying ourselves. It’s a dark reality we all share.”-Jim Acosta

I remember watching the second plane hitting the second of the Twin Towers. I remember the being on the phone with my father, a native New Yorker, when the second tower crumbled to the ground. I remember hearing him choking back the anger and the tears across the miles, “What the f— is wrong with these people?”

Flash forward 20 years. My father turns on CNN first thing and drinks his morning coffee. My father, who lost former co-workers from his old workplace, Con Edison, on that day, supports the bumbling idiot in The White House who befriended China and turned the reins over to the Taliban in Afghanistan after decades of fighting and sacrifice. Some sacrifices came from his very own family members. My father, who now thinks Climate Change is a bigger threat than the Taliban. My father, who is so petrified of the COVID, he did not want to see me until I got shot up with Pfizer. My father, who blames the COVID on the sitting president when it made landfall here (Trump) and not the sitting president in its country of origin. My father, an all-around, good-hearted guy, believes everything CNN shovels and slings around. How did this street-smart New Yorker get from righteous anger and heartbreak on 9/11/2001 to talking about Climate Change and thinking Joe Biden was the better alternative to Donald Trump in The White House? I’ll tell you how.

So spare me, Jim Acosta, the pensive, soulful stare at that camera. Spare me the lamenting that “we appear capable of destroying ourselves” like you actually give a damn. You don’t. Your spineless colleagues don’t, either. In fact, you all have been largely instrumental in this great divide. You all have been pushing the two realities in America for a long time. You all have pushed this division that has ruined families, friendships and any unity that could possibly be salvaged. Why? Because division is newsworthy. Because your six-figure-salary jobs depend on ratings and sensationalism and division is the end result. You all are nothing but empty shells of soulless, blood-sucking trolls-pretending to be compassionate for the camera. Pretending to be responsible “journalists” who seek the truth but continue to spread lies. YOU created these separate worlds we live in. YOU let hate into the hearts of Americans. You’ve fanned this fire’s flames. And you want to put COVID on the terrorist watch list, do you? I say we start with putting you and some of your counterparts on that list.