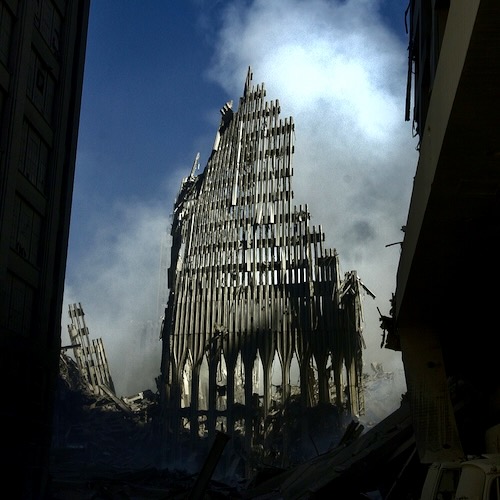 We cannot and should not ever forget what happened on that bright September morning. 9/11 changed us all. It changed the world. It exposed, as Sarah writes here, multiple dividing lines and factions that were already bubbling under the surface.

It is more important now than ever that we don’t forget 9/11. That we remember that it was a terrorist ideology and emotion that led to that horrific attack in New York, Washington D.C., and a plane crash in Shanksville, PA.

But people are forgetting, and we shouldn’t let that happen. It’s been 21 years and now young people have no idea as to what that day did to our psyche. We should listen and understand what it meant to be trying to get out of the towers before they fell.

Paventi continued, “There was one point when everyone got over so the firemen could run up. Here we were all trying to get out and all these guys coming up in full gear, carrying hoses. I couldn’t imagine running up to this fire, running upstairs and knowing you still have 40-50 flights to go.”

“Don’t look, just run, they said,” Paventi explained. “We started running uptown, and I remember looking up and watched as the first tower just dropped in on itself. My co-worker had just gotten a hold of his wife and the last thing she heard from him was, ‘Holy s–t’, before the phone cut out.”

“I look to the skyline, and the other tower just starts to melt down into the skyline,” Paventi said. “Literally disappeared. We look at each other and just start running. I remember a fighter jet flying over the bridge and wondering, ‘Is that one of ours, a good plane?'”

We must remember what it was like to be sitting in a classroom with school children and being told that the country you lead is under attack.

What made the NYC Tribute Museum different from the 9/11 Memorial and Museum at Ground Zero was that it not only taught people about one of the darkest moments in U.S. history, but also moved the story forward.

“The thing that [visitors] reflected on the most was learning not only events of the day, and those stories and the memory of the people we lost, but also the rebuilding, the recovery,” she said. “And then, how many hundreds of foundations, small family foundations that grew out of Sept. 11 that were doing such great work around the world.”

Why must we not forget? Because there will be people who will hate. Because terrorism is alive and well around the world. And they will try to attack and destroy those they hate. They will do so in ways large and small.

Then, on September 12, 2001, one of the other professors in my department posted an email message to the members of the department, calling for peace and reconciliation with the people who had carried out the attacks and stating that our violent history was the cause of the retributive strikes against us and that we deserved this counterblow. This person asserted that the best thing we could do was to come to a collective reckoning with our own malevolent role in world affairs and to spend any resources we had on the poor populations of the countries from which the terrorists had sprung, from which they always, invariably spring.

Yes, many didn’t want us to go to war. No one WANTS war, but when war is brought to our very shores, were we supposed to lie down and take it? No.

Just as with Pearl Harbor, or all of our history for that matter, our children should learn about that day.

“The bottom line is the most devastating battleground in the history of the United States, probably one of them, is Ground Zero, where 3,000 people died on the morning of September 11,” said Kerik. “Innocent people died on Sept. 11. You know what? Nobody should forget what happened that day. And I’m stunned that schools around the country are not educating our youth to let them know what happened.”

To help educate children about what happened on 9/11, Tunnel to Towers founder Frank Siller started a curriculum based on the attacks for kids K-12.

One of the most powerful memories I have of 9/11 and the days that followed was the calm heroism of American Airlines Flight Attendant Betty Ong, who was in touch with the ground as her doomed Flight 11 headed for the Twin Towers. Listen to the tapes: https://t.co/j07JsQpbUz pic.twitter.com/5TcKFmd0Pj

We cannot and should not ever forget, or the sacrifices and efforts of those we lost that day, and all the work of our first responders and military over the years is diminished.

I have not, nor will I ever. I hope you don’t either.