Next post
We Cannot And Should Not Ever Forget 9/11 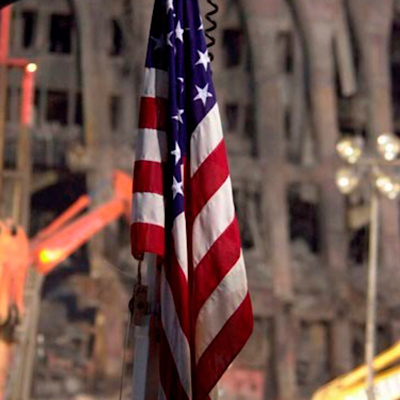 by Guest Writer in Headlines 24 Comments

In memory there is a dividing line on my life, a bright one, cutting across a bright and clear September day in the little Mountain Town of Manitou Springs.

I was a young mother, with two children in elementary school. Walking the boys to class – let that be a lesson to you – on that exceptionally fine day, I remember thinking we were finally where we wanted to be: we had a house we loved, the kids were happy in school, we had a writers’ group, and my first novel was coming out in a month. I remember thinking how much I liked my life.

For reasons I can no longer remember, older son got in half an hour before younger son that day.  So I took an old science fiction paperback to read, and sat on the floor reading while younger son talked to his friends and ran around.  When he went into the classroom, I walked back at a leisurely pace, and was making myself a cup of coffee when my best friend at the time (another young mother and writer) called screaming “Turn on your TV, turn on your TV.”

There the world rips in half, torn asunder.

It’s not the towers. It’s not the images of my fellow Americans jumping to their deaths from the burning buildings.  It’s not the sense of violation, or the uncalled for attack from foreigners poisoned against us by an ideology masquerading as religion. It is what happened next.

In my mind what 9/11 did was rip down the gauzy veil through which I regarded my neighbors, my friends, my colleagues, as well as the future of my nation.

I was heartened and cheered that in Manitou Springs – Boulder South – for a full week the boys came home singing the old patriotic songs.  The thumpity thump ones, full of pride and decision.  I was comforted by the American flags everywhere.

It started in the online writers’ lists, first, no surprise in retrospect: people expressing discomfort with the American flags everywhere and the expression of nationalistic sentiments, because it made them feel like we were descending into fascism.

Not more than a month later, before the end of the year, a member of our in person writers’ group which met in our house expressed the thought that we shouldn’t go to war over 9/11, because “it’s not even as many people as die of car accidents every year.”

I don’t need to tell you the rest of the story, but it lead eventually to my not being able to keep quiet and coming out politically before the entire world and therefore being rendered more or less unemployable in traditional publishing. (No, I don’t mind. I make more indie.)

And it led, by inexorable steps to where we are, where it’s clear that half the country, our very countrymen, whom we thought merely silly and deluded, fancy themselves “citizens of the world” while knowing clearly nothing about the world in general (vacationing abroad doesn’t give you any knowledge of what it’s like to live and work abroad.) They hate those of us who love our homeland, because they’re convinced it was patriotism that caused WWII (instead of deranged foreign alliances and totalitarian ideologies.) And the they hate the United States because it’s in the way to their dream of a united socialist world.

Without 9/11 would we have fractured so completely? Did they go insane at the shock of an attack on our soil? Are they merely cowards turning their coats to join the winning side?

As much as they hate the US, because they think we’re the source of all evil, they’re deranged children completely unaware of the consequences of their actions.

And we’re locked in here with them, day by day, trying to reclaim our country and save a future of liberty and justice for all for our descendants, while they rage and fume and destroy, convinced utopia is just one more burning summer away.

I liked my dream of what the world was pre-9/11.  I liked the friends I didn’t realize were dangerous lunatics bent on destroying mankind’s best, last hope. I liked the gauzy belief that we’d destroy the last shreds of Marxism simply by showing how much better freedom was.

The rubble of the towers as they fell revealed a festering wound in our midst, one I pray will heal without open conflict and the destruction of a civil war.

Now, twenty one years later, let us rededicate ourselves to building under, building over and building around so when things collapse, the nation – and western civilization – can go on.

May G-d bless and keep the United States of America, the last best hope of mankind.

Today’s Guest Writer is Sarah A. Hoyt. She was born Portuguese, a mistake Sarah rectified as soon as possible.  She’s been — legally — an American for over 35 years, during which time she’s published somewhere around 40 novels (Don’t make her count) and well over 100 short stories. When not writing frantically, she’s cuddling with her husband and a variable number of cats, or engaging in one of her multiplying hobbies.

Our featured photo, “Devastation at the World Trade Center site in New York City, in the aftermath of the 11 September 2001 terrorist attack.” has been cropped for this post. National Archives,