Next post
No, "Papa In Chief" Is Not Going To Save This Crying Planet 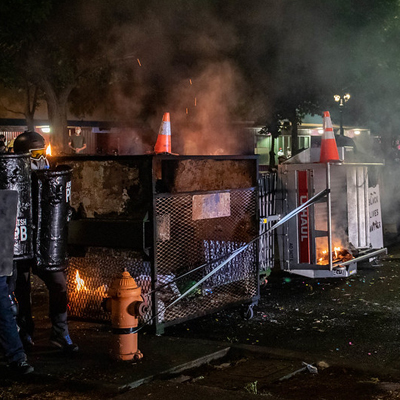 In his Inauguration Address to the nation, Joe Biden asked the country to end “this uncivil war,” and for the “unity” to “do great things and right wrongs.”

Progressives like CNN’s Van Jones squeed about how beautiful the speech was, and how beauty heals.

Well, some people in the country didn’t respond too well to Biden’s speech. But that would’ve been those hardcore Trump supporters, right?

Um, no. Because just as Biden and Harris were taking their oaths of office, Antifa/BLM types in Denver were burning flags outside the Colorado State Capitol in Denver. Apparently they didn’t get that unity memo.

The “We Bash Back” crew also assaulted two street preachers who showed up to protest abortion. So much for unity and the beauty that heals.

However, the Denver stunts were small potatoes compared to the Inauguration Day events in. . . you guessed it. . . Portland.

Prior to the Inauguration, Antifa in Portland had already made plans for “direct action” — that is, riots. They arranged to meet at the aptly-named Revolution Hall in the so-called “J20” demonstration to protest the Inauguration and police, while also demonstrating for indigenous peoples rights. 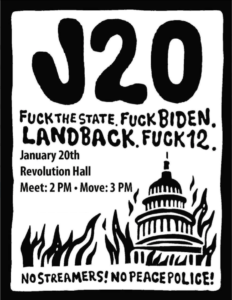 So about 100? 200? protesters — depends on whom you ask — set out on the beleaguered streets of Portland to protest All The Things. They carried signs that bragged “We Are Ungovernable” and called for “A New World From the Ashes” — whatever that means. They didn’t want that Joe Biden unity; instead they want revenge for “police murders, imperialist wars, and fascist massacres.”

Protesters are tagging the Democratic Party of Oregon Headquarters and smashing windows.

Naturally, this being Portland, these protests wouldn’t be complete without destruction and mayhem. Thus, they smashed windows and painted anarchist graffiti on. . . get this. . . the Democrat Party headquarters.

Here are the goons in action. They also brought umbrellas to avoid being captured on surveillance cameras.

On the ground in Portland, Ore. for @townhallcom. A group of Antifa marchers just attacked the city’s Democratic Party office. They broke windows and spray painted the building.

Some of them had a hard time breaking the windows. pic.twitter.com/v0PSM7rEvd

“Officers have observed people in the area of Revolution Hall take an officers bicycle and throw objects at retreating officers.”

Hold on — retreating officers? So why are Portland’s finest backing away from the mob? Well, what would you expect in a city run by Mayor Ted Wheeler — a soy boy who was clocked by a protestor while he was dining at a restaurant two weeks ago. He apparently prefers beta male behavior in his police force.

But Portland wasn’t the only city whose protesters didn’t get Biden’s unity memo. In Washington State, reporters were rejoicing that the State Capitol in Olympia was peaceful during the Inauguration. None of those right-wing Trump-lovin’ militants showed up to raise hell in the Evergreen State.

Except protesters showed up to raise hell in Seattle, and they weren’t Trump supporters, either. Once again, Antifa caused chaos, this time in downtown Seattle in their version of a J20 protest. They burned American flags, vandalized the U.S. Court House and stores — including an Amazon Go store where they spray-painted “Guillotine Bezos.” Their chant? “No cops, no prisons, total abolition.” Plus, they want to “f*** Biden,” too.

“F*** Trump, f*** Biden too, they don’t give a f*** about you” Protesters chant hours after today’s Inauguration in DC #Seattle #SeattleProtests #J20 pic.twitter.com/DWyzTBlnoE

So what about the unity? Or the beauty that heals? Or the gushing, mawkish praise for Biden’s speech emanating from the media’s circle jerk? Especially because the Orange Man is now gone.

Apparently none of that inspired Antifa to give up their rage and instead love their fellow Americans in a Kumbaya moment. Because such violence was never about Donald Trump, nor was it even about George Floyd or race or fascism. As for those people who thought that a Biden presidency would take away all the nation’s bad feelings — sorry, you got played.

Rather, this chaos is about hate for America. Hate for her traditions and for people who love her. Joe Biden’s flowery sentiments about unity in his inaugural speech don’t mean a hill of beans to people who just want to see America burn.