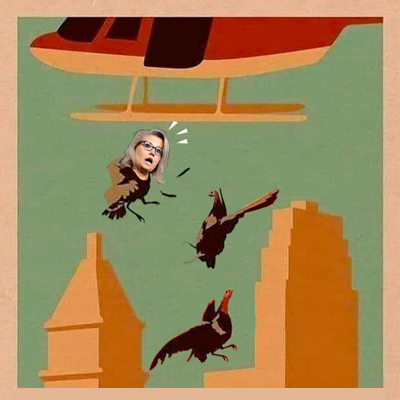 It can’t be Thanksgiving without the classic 1978 clip from the TV show WKRP in Cincinnati, in which the radio station hired a helicopter that dropped live turkeys. Chaos ensued when the birds hit the ground below “like sacks of wet cement.” It’s one of the most hilarious clips from 70’s TV — or from any decade, for that matter.

And now, because of some disgruntled Dems, Liz Cheney may meet the same fate as those turkeys: dropped from their favor because of her obsession with Donald Trump. They also suspect her of using the January 6 committee — of which she was one of two Republicans — as a stepping stone to her political future.

Which, of course, is toast anyway, but Liz doesn’t yet believe that.

According to the Washington Post, fifteen anonymous staffers are miffed that the committee may be deep-sixing the information they had brought to the table. Their work, part of the “Blue Team,” focused on law enforcement and how it failed to assess the predicted attack on the Capitol. Other groups, like the Green Team and the Purple Team, examined financing for the January 6 event, along with militia groups and extremism.

But that’s all taking a back seat because of Liz Cheney’s fixation on Trump. Even the name of her group provides a clue: it’s the “Gold Team.”

“We all came from prestigious jobs, dropping what we were doing because we were told this would be an important fact-finding investigation that would inform the public. But when [the committee] became a Cheney 2024 campaign, many of us became discouraged.”

“Donald Trump is the first president in American history to attempt to overturn an election and prevent the peaceful transfer of power. So, damn right Liz is ‘prioritizing’ understanding what he did and how he did it and ensuring it never happens again.”

Not only that, but Adler went on to criticize the other teams’ work as being “subpar” and reflecting anti-Republican bias.

“She won’t sign onto any ‘narrative’ that suggests Republicans are inherently racist or smears men and women in law enforcement, or suggests every American who believes God has blessed America is a white supremacist.”

That kind of language won’t sit well with Cheney’s committee colleagues, who are quite angry with her already.

It seems that Liz Cheney is also dropping her fellow Republicans like those turkeys from the helicopter. Wasn’t it Liz Cheney who called Gov. Ron DeSantis “dangerous”?

Why, yes it was. She also endorsed Democrat incumbents Reps. Abigail Spanberger (VA) and Elissa Slotkin (MI) in the midterms. Plus, she expressed her support for Ohio Democratic Sen. Tim Ryan over GOP challenger J.D. Vance. Vance prevailed in that Senate race.

“Both of whom took steps that fundamentally threatened the constitutional order and structure in the aftermath of the last election.” https://t.co/GZnTSt8z8T pic.twitter.com/JACJ4G2PiL

Talk about a brazen quest for power. As Bonchie at Red State put it:

“In this case, she’s claiming that Ted Cruz and Josh Hawley have somehow disqualified themselves from office by objecting to single states being certified following the 2020 election. First of all, Liz Cheney is not the arbiter of who is qualified to be in office in the United States. That’s a decision that rests in the hands of the voters, whether she likes it or not, and clearly, her respect for “democracy” goes only as far as it serves her selfish, single-minded interest.”

If Cheney thinks that such shenanigans will send her to the White House in 2024, she is sadly mistaken.

Republicans Who Play With Democrats Get Dropped Like Turkeys

Liz Cheney is about to found out the hard way: that once Democrats and the media are done with Republican allies, they’re dropped like those WKRP turkeys.

Remember John McCain? He was one Republican whom the media just loved — the “Maverick” who stood up to his party.

That is, until he ran for President in 2008 against a young political rock star named Barack Obama. The media and Democrats swooned, and McCain’s presidential aspirations went poof! He became a turkey.

Now cracks in the Dems’ love affair with Liz Cheney are emerging due to conflicts within the January 6 committee. Some colleagues blame her obsession with Trump. They also suspect she’s using them in a bid for the presidency, and they resent it.

The ironic thing, however, is that Cheney’s self-absorption is every bit as grandiose as Trump’s. She envisions herself as the Wyoming version of Claus von Stauffenberg who will save her country from the Evil Orange Man. However, many in the GOP are getting fed up with her antics and her preoccupation with the former president.

Truth be told, I don’t like Donald Trump, either. I hope he does not become the Republican nominee in 2024, as I have written here and here.

But I don’t hate him with every fiber of my being like Cheney does. Nor would I turn on my party to play with Democrats who support abortion, teachers unions, and radical social agendas, as well as being soft on bad actors like China and Iran. So if Trump does become the presidential nominee in 2024 (please God, no), I will vote for him once again. We cannot have another progressive Democrat in the White House.

Meanwhile, Liz Cheney will find herself dropped by both Dems and the GOP like those hapless turkeys from the WKRP helicopter.