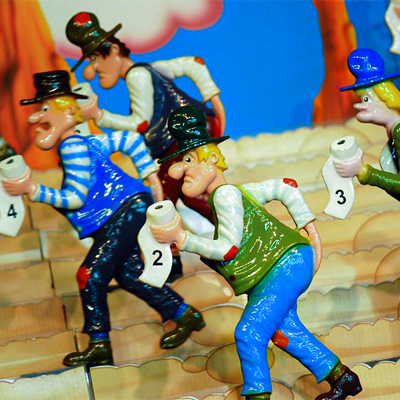 Who would’ve ever thought that someday normal people would be fighting over toilet paper? Yet here are, during a worldwide COVID-19 outbreak, and fights are erupting in stores for TP as if it were a flat screen TV on Black Friday. Which shouldn’t be happening either, by the way.

Check out what happened in New South Wales, Australia, in the Battle of the Toilet Rolls:

“There is no need for it. It isn’t the Thunderdome, it isn’t Mad Max, we don’t need to do that.”

The Land Down Under may have given the world the Mad Max movie series, but the last I checked Australia is a sophisticated First World nation, not a dystopian wasteland. And those women in the brawl weren’t exactly Road Warriors, either.

Yet in a nation far to the north of Australia, after a 2011 earthquake and tsunami which claimed thousands, Japanese citizens politely queued up, waiting for stores to open. But in 2020 Aussies were fighting over . . . toilet paper.

Here in the United States, people are also hoarding the precious toilet paper commodity, although fights haven’t erupted. Yet.

In Los Angeles, which currently has 14 cases of COVID in LA county, Costco is limiting its toilet paper. At a Target store, bottles of bleach have vanished. Other Angelenos are worried about standing too close to other people, and about shaking hands, some preferring elbow bumps. And there is constant hand-washing everywhere, although that’s something everyone should be doing anyway, especially after using the loo.

Here in the Kansas City area, where health officials just identified a first case in the metro, toilet paper has become scarce in Costco stores. On Friday evening, at my local Costco, there was none to be had (although I had no problem buying a large package at a grocery store. Go figure.) Plus, at the pharmacy counter I overheard people asking about hand sanitizer. We’re out, said the pharmacist.

Mind you, this was before doctors identified the first Kansas City area case.

Can we just do like the famous British World War II poster? Keep Calm and Carry On.

That doesn’t mean ignore the facts. After all, at the time of this writing, the United States has passed the 500 confirmed cases point. And this isn’t the end, either; Dr. Anthony Fauci, director of the National Institute of Allergy and Infectious Diseases, said that the Trump administration would “take whatever action is appropriate” to contain the virus. This may include travel restrictions in areas with high numbers of cases. However, he said the actions wouldn’t be as draconian as in China.

“I don’t think it would be as draconian as ‘nobody in and nobody out. But there’ll be, if we continue to get cases like this, particularly at the community level, there will be what we call mitigation.”

Of course the situation is serious. But I lay the sense of panic at the feet of . . . you guessed it. . . the media.

For example, on Sunday morning, CBS News published an article at their website about the 1918 flu pandemic. Which has nothing to do with COVID-19, since COVID is not the flu. Plus, our current medical care far outstrips anything from 100 years ago. Yet, CBS thought it would offer up a “cautionary tale.”

So what’s next — a “cautionary tale” about the Black Death?

Dr. Drew Pinsky castigated the media for fueling the panic. Especially, he says, since flu claims many more victims than COVID.

“Essentially the entire problem we are having is due to panic, not the virus. I was saying this six weeks ago. We have six deaths from the coronavirus, 18,000 from the flu. Why isn’t the message, ‘Get your flu vaccine'”?

“The entirety of the problem now is that people are being pushed into bankruptcy. Travel is down. The supply chain is being interrupted because of panic…. It is a press-induced panic that will have real consequences. It will not be the virus.”

So it’s no wonder that people fight over toilet paper, when the press fills its 24/7 news cycle with stuff that makes the average viewer think we’re in the End Days. Plus don’t get me started on social media — it seems that yesterday’s constitutional experts have now become authorities on infectious diseases.

If you have concerns, follow the directives of the Centers for Disease Control. For example, stay home if you’re sick, avoid those who are sick, and wash your hands frequently. And whatever you do, don’t fight over toilet paper.