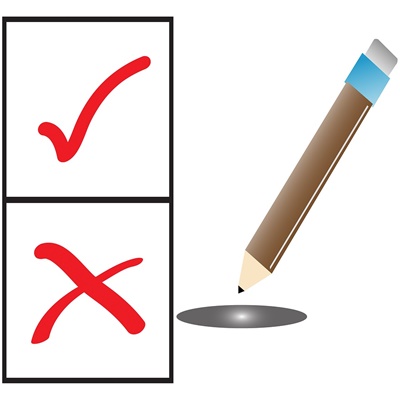 The NFL’s New Anthem Rule – Stand Or Stay Inside [VIDEO] 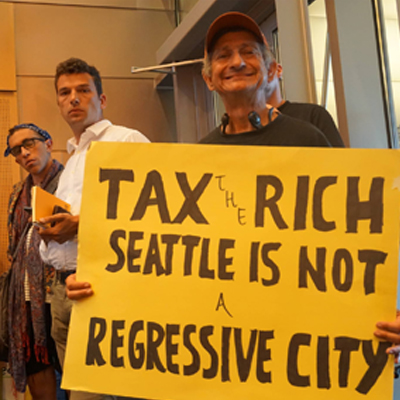 Next post
Stuck on Stupid: The Seattle City Council Wants to Levy Another Tax. [VIDEO]

The NFL’s New Anthem Rule – Stand Or Stay Inside [VIDEO]

The NFL knew it had to do something after the immense public relations National Anthem debacle of the 2017 season. The new policy came down this morning states that teams will be allowed to stay in the locker rooms during the National Anthem, but if you are on the sidelines, you are standing – or you will be fined.

Breaking: A new NFL policy will require players on the field to stand for the national anthem. Players may stay in the locker room, but teams will be fined for any personnel that "do not show proper respect for the flag and anthem” https://t.co/RDXiJ9p0ux

The policy read: “the 32 member clubs of the National Football League have reaffirmed their strong commitment to work alongside our players to strengthen our communities and advance social justice.”

The teams agreed to the following requirements:

– “All team and league personnel on the field shall stand and show respect for the flag and the Anthem.”

– “The Game Operations Manual will be revised to remove the requirement that all players be on the field for the Anthem.”

– Personnel who choose not to stand for the Anthem may stay in the locker room or in a similar location off the field until after the Anthem has been performed.”

– “A club will be fined by the League if its personnel are on the field and do not stand and show respect for the flag and the Anthem.”

– “Each club may develop its own work rules, consistent with the above principles, regarding its personnel who do not stand and show respect for the flag and the Anthem.”

– “The Commissioner will impose appropriate discipline on league personnel who do not stand and show respect for the flag and the Anthem.​”

Goodell said that the “efforts by many of our players sparked awareness and action around issues of social justice that must be addressed” but it was unfortunate that “on-field protests created a false perception among many that thousands of NFL players were unpatriotic.”

“This is not and was never the case,” he continued.

This is a much better compromise than what got tossed around yesterday, but naturally, the players’ union wasn’t happy about it – and neither were the social justice warriors.

The new NFL policy is not a compromise. The players wanted to assert their right to peaceful protest. The league didn’t. The league has made it against the rules to do so. And no, staying in the locker room isn’t the same thing.

Look, the union is welcome to scrutinize the owners’ new policy to their heart’s content. But if the owners tell you to show up in a frilly pink tutu and a coconut bra as a condition of your employment, then guess what? They are paying you to do a job, and if they decided to change the playing uniforms, you had better wear your “flair.” And if your employer tells you to stand up or stay off the sidelines during the National Anthem, guess what you’re going to have to do?

Ummmm…. someone needs a dictionary. Last time I checked, the owners were not forcing anyone to play for them. The players signed contracts. And if they don’t want to play, there are hundreds of other guys waiting in the wings to take those jobs.

Slaves? Good grief, can you be any more ridiculous? Knock it off with this nonsense. No one has kidnapped these players from their homeland and forced them to play football. They are free to leave if they don't want to abide by the rules set forth by their employer.

How do I become a forty million dollar slave ? Stand, kneel, dance, I do it for that $$$

Oh, and poor Colin Kaepernick. He had no comment except to retweet his lawyer. 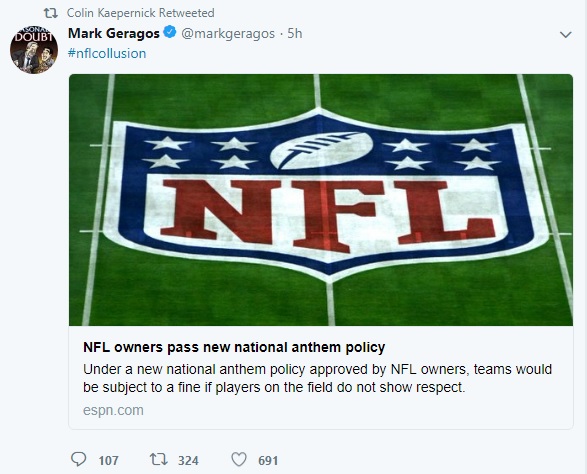 The players are beginning to sound off.

Doug Baldwin on @710ESPNSeattle on the NFL Anthem rules today:

Says he's been in contact with Roger Goodell, calls the rule tone deaf.

Um, yes. The owners care about the bottom line. Without the people watching on TV, there is no money in the advertising. Without fans in the stands, there aren’t ticket sales. The public spoke, the ratings plummeted, and the owners want that money back – or those players will find, league-wide, that they would be playing for a lot less money.

And something tells me that the players like being paid.

Will this stop the kneeling? No, there’s probably going to be some outliers who won’t care, will pay the fine, and who will be lauded by the SJW crowd for taking a knee for his beliefs. But in general, it’s going to be an outlier. Even the most social justice-y of teams has admitted that this has become a distraction, and they just want to get back to football.

The rest of us would like to just get back to football, too.