The Minimum Wage Fight, and the Seattle Experiment

The Minimum Wage Fight, and the Seattle Experiment

On Wednesday, Senate Republicans blocked a measure to begin debate on raising the federal minimum wage from the current $7.25 an hour to $10.10 an hour.  Democrats instantly seized upon the vote, hoping to stir up their base in this midterm election year on a topic that they think they can win on.

But while raising the minimum wage may be blocked on the national level (and even if the measure had passed the Senate, there is no way it would have passed the GOP-controlled House), at the local level where I live, Seattle, the minimum wage debate has been going at breakneck speed.  It all culminated yesterday with Seattle’s far-left and snooze-inducing Mayor, Ed Murray, putting forth his plan for a calculated increase of the minimum wage in the city of Seattle over the next  three years to reach $15 an hour.

This proposal was the result of a minimum wage task force that was made up from business, labor, and community representatives, including Seattle’s most annoying councilwoman, self-avowed socialist and former Microsoft engineer Kshama Sawant (who, by her own campaign disclosure documents, is an admittedly wealthy person and part of that “evil” 1%).  The proposal will be sent to the Seattle City Council, to be voted on and potentially made into a city ordinance.  The proposal does make a differentiation between “small” businesses and “large” businesses.

The mayor said for small businesses, defined as businesses with fewer than 500 employees, the minimum wage would be raised over a period of seven years. For these small businesses, the mayor said $15 could be reached in the first five years through a combination of health care, tips and wages. This piece he said would eventually be phased out.

The mayor said after the $15 minimum wage has been reached, further increases would be tied to the consumer price index, and no industry, organization or class of employees would be exempt except where restricted by federal or state law.

So, in other words… 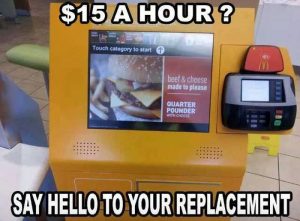 This is where we in Seattle are going to be headed.  There is no possible way that a job that is worth $9.32 an hour now (Washington state’s current minimum wage, which is already the highest in the country) will be worth $15 an hour in three years.  If this passes and stays put, Seattle will be poised to become a city of the ultra-wealthy and the poorest of the poor, with anyone in-between with a lick of sense fleeing to outside the city limits to live and shop.  With the technology that exists now, you can’t tell me that a touch screen is going to be less accurate in taking your order at McDonald’s or Starbucks than the human being who currently takes it.

The fervent, near-religious belief that simply raising the minimum wage will fix all economic woes is not borne out in evidence, says Maxford Nelson, a labor policy analyst for the Freedom Foundation in Olympia, Washington.  In a guest column for The Seattle Times, Nelson says:

Local minimum-wage advocates simply take the number of workers earning less than a proposed minimum wage, multiply it by the wage increase per worker, and conclude that increasing the wage floor creates millions of dollars in new consumer spending in the economy. …

These slightly more sophisticated minimum-wage apologists, from the White House to the Economic Policy Institute, all rely on a single study when touting minimum wages as economic stimulus.

The study determined that a $1 hike in the minimum wage increased spending at affected households by about $700 per quarter “in the near term.” Activists stop right there and cite the study as proof the minimum wage expands the economy.

As the authors warn, however, their study is “silent about the aggregate effects of a minimum wage hike.”

The entire column is worth reading, as are the studies he cites.  However, no one in Seattle is listening.  Murray, who out-lefted the incumbent mayor, Mike McGinn, to be elected last year (not to mention McGinn’s complete political incompetence), is so afraid of the “15 Now” crowd led by Sawant, that he jumped on the $15 an hour bandwagon during the election in order to get attention and votes.  Stuck with the political realities of his rash promises, he assembled this task force.  Sawant, for her part, has the mayor and city council so cowed by her political chutzpah that she apparently thinks she IS the socialist ruler of Seattle, was predictably upset about the mayor’s proposal because… it didn’t go far enough.  She wanted the $15 an hour yesterday, and damn the consequences.

Everyone outside of Seattle should breathe a sigh of relief that, for the moment, the national minimum wage is staying put.  And if you are outside of Seattle, be paying attention to what happens here.  The city council are left-wing enough to made this a city ordinance and make the city a lab experiment in socialist economic policy.  Seattle is about to become a city even more divided by money than it is currently, with the socialist poor resenting the wealth of the ultra-rich.  Let Seattle serve as a warning to all.  Don’t let this happen where you live.