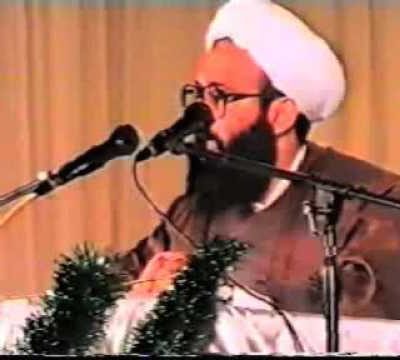 At 9:45 am local time on Monday (5:45 pm ET Sunday), a gunman entered the Lindt Chocolat Cafe in Sydney, Australia, taking an unknown number of staff and customers hostage. The unknown gunman was not shy about expressing his motives for the world to see, as he sent hostages to the front window to hold up an Islamic flag for news cameras to see.

Zain Ali, the head of the Islamic Studies Research Unit at the University of Auckland, said it was difficult to read the message because media images showed only the lower part of the flag. But he believed it was the Shahada, or declaration of faith, largely because a black flag with white writing in a contemporary context often contains that message. He said he could make out the word “Muhammad.”

Ali said the Shahada translates as “There is no deity of worship except God (Allah), and Muhammad is the messenger of God.” It is considered the first pillar of Islam’s five pillars of faith, and has been used by groups like al-Qaida and Islamic State but wasn’t invented by them, Ali said.

… but if it looks like a duck and sounds like a duck, then it’s probably a terrorist action.

US evacuated Consulate in Sydney after #sydneysiege. Emergency warning to U.S. citizens urging them to "maintain high level of vigilance".

I can’t imagine that a hostage taking WITHOUT a terrorist element would necessitate the evacuation of the American Embassy, plus a general safety warning to all U.S. citizens in the area.

Emergency message for US citizens re: situation in #MartinPlace in #Sydney, posted on the consulate Facebook page: pic.twitter.com/hq5Z3qAA5E

#Sydney: "Negotiators have had contact and continue to have contact" with the hostage taker: New South Wales police pic.twitter.com/LQSEioAgcn

The number of estimated hostages has varied from 30 to 13 people, but three people have been confirmed to have escaped, with another two also being released. The last two hostages that have been released appear to be Lindt Cafe staff.

This is the moment the last woman escaped https://t.co/QyaNJ4cRbf

As for what the gunman wants? No one knows yet, though there are reports out that he demanded to speak to Prime Minister Tony Abbott.

https://twitter.com/RadioTodayExtra/status/544289239936937984
Victory Girls will continuing updating as events unfold in Sydney. We are grateful to see that five hostages are safe, and pray that this will end without any innocent person being harmed.

UPDATE (3:09 EST): Well, there seems to be little doubt as to where the gunman’s sympathy lies.

As the standoff entered its 15th hour, with police and news crews surrounding the shop as frightened hostages looked out through the front window, police identified Man Haron Monis as the gunman holding captives inside Lindt Chocolat Cafe. His identity was known early on to police and media alike, but was only released for the record by police sources as night fell on Sydney with the nation transfixed on the televised scene.

Monis, who reportedly emigrated to Australia in 1996, is known in Australia for his public campaign of writing letters to the families of fallen soldiers calling them “murderers” and urging the recipients to lobby the government to withdraw from Afghanistan. Haron was charged in 2009 with using the postal service to harass in a case he fought all the way to Australia’s highest court, which dismissed his appeal.

Last year, he was charged in connection with the murder of his ex-wife in a case that is pending as Monis is free on bail. He was charged earlier this year with sexual assault of a woman who went to his office in New South Wales for “spiritual healing.”

Night has fallen on Sydney, and the situation seems to be at a standstill. We will continue to update as events occur.

VIDEO (@SkyNews): Watch the moment gunfire and explosions were heard inside the Lindt cafe in Sydney. #sydneysiege http://t.co/n5kUympYTD

Let us pray that this will be the end of the standoff.

UPDATE (10:45 EST): Police are declaring that the siege is over.

At least 4 people are being reported as injured, with some numbers as high as 7 people.

No word on the gunman’s status.

No word yet on cause of death. Sky News is reporting that one of the injured is a police officer.

UPDATE (11:06 EST): A bomb disposal robot is currently on the scene in the cafe, according to Sky News.

UPDATE (11:58 EST): There are unconfirmed reports that Monis, the gunman, is among the dead.

Monis, an native of Iran who emigrated to Australia, has a long rap sheet, as was mentioned earlier. People are now asking why he was allowed to stay in Australia.

A 34-year-old man and 38-year-old woman also were among the dead, police said. Four people were injured in the raid, including a female hostage who was shot in the leg, an official told The Associated Press. One policeman, who suffered a gunshot wound in the face, is in good condition and is grateful to be alive, Police Commissioner Andrew Scipione told reporters at a press conference.

The gunman, the self-styled Sheikh Monis, was shot and killed by the police.