It’s been nearly a year since Nikolas Cruz opened fire at Marjory Stoneman Douglas High School in Parkland, FL, taking 17 lives. But the stench is still rising from Broward County, namely from the office of Sheriff Scott Israel.

Here’s a news video of that report which provides harrowing images of Nikolas Cruz with his AR-15, stalking the high school halls. You’ll also see school officer Scot Peterson waiting outside the building.

Certainly there’s plenty of blame to go around. But there’s also the story of how Israel covered up for Peterson, after Peterson did the same for Israel. One hand washing the other, you might say.

It goes back to 2014, when Brett Israel, the Sheriff’s son, was the starting quarterback for Marjory Stoneman Douglas High school. He was a senior that year, and he apparently liked to pick on freshmen — one in particular. The victim, a 14-year-old boy, reported to the school resource officer how Brett Israel, along with another senior, sexually assaulted him. He told the officer that while Israel held him down, another senior kicked him and grabbed his genitals. They also shoved a baseball bat between his buttocks, as if he were being raped.

All this information went into a four-page report that got filed and downplayed. Who was the school resource officer who filed the report? Scot Peterson.

Peterson could have charged Brett Israel with felony, but he reduced it to simple battery, writing that “the school district’s disciplinary matrix requires no law  enforcement action required regarding the incident.” Instead, Brett Israel received a three-day suspension. It was all part of the lenient environment of the Broward County school system.

Moreover, part of that environment was the “PROMISE” program, which was supposed to counsel young offenders instead of arresting them. Never mind that prosecutors and police didn’t think this was a great idea. Touchy-feely was the word of the day.

Guess who was one of the designers of this program? Sheriff Scott Israel, who worked with Schools Superintendent Robert Runcie in 2013 to implement PROMISE, an Obama-era pipe dream. “We can only measure our success by the kids we keep out of jail, not the kids we put in jail,” bragged Israel at the PROMISE signing ceremony.

And, voilà! Arrest reports dropped in the Broward County schools. The program was a miracle! Especially, of course, for Brett Israel.

It gave Nikolas Cruz all the breaks, too. In fact, he got to reset his offense record to zero every year. Nothing to see here, move along.

The stench was getting worse. Because not only did Scot Peterson give Sheriff Israel’s son the breaks on a sexual assault charge, Israel reciprocated and gave Peterson some good breaks, too. 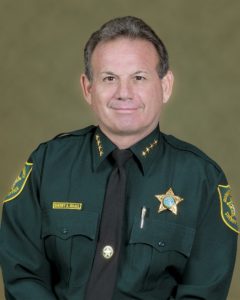 Like not firing him after his epic fail at the Parkland shootings. Instead, he allowed Peterson to resign. So now, at 55 years old, Peterson is collecting more than $8700 per month for life on a public pension. That doesn’t even include health insurance.

And, to add to the stench, Sheriff Scott Israel still calls his leadership “amazing” and has no plans to resign. Plus, he plans to run again in 2020 after his 2016 re-election victory in heavily-Democrat Broward County.

Ah, but some fumigation might soon clear the stench. Rumor is that the new Florida governor, Ron DeSantis, will boot Israel from office sometime before February 14th, the first anniversary of the Parkland shooting. On top of that, outgoing Gov. Rick Scott just appointed Andrew Pollack, the outspoken father of Parkland victim Meadow Pollack, to the state Board of Education. Pollack advocates for school safety and accountability, but he’s no fan of the Broward County Sheriff’s office. Currently he’s suing Scot Peterson, whom he’s called the “Coward of Broward.”