Next post
San Diego Teachers Teach Illegals In-Person, Not Their Own Students 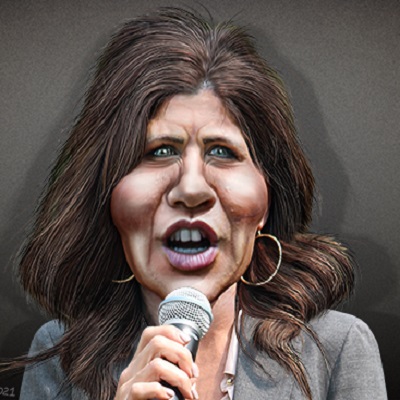 by Shelby Gallagher in Cultural Issues, Everything Else 1 Comment

Governor Noem’s tweet on International Woman’s Day was heard around the conservative world. Her hearty support for the transgender bill that would preserve women’s sports in South Dakota was making its way through the legislature. Governor Noem’s enthusiasm was a breath of fresh air.

“I can’t wait to sign it” she said. “Very soon!” she said. For someone who was so excited to sign the legislation “very soon”, she has a funny way of showing it.

“After reviewing the measure for nearly ten days, Noem took issue with ‘style and form’ within the bill, saying she will sign it if lawmakers agree to the changes.”

What happened in ten days? Other states were passing the law that Noem sent back to her legislature. Arkansas passed a law

“[prohibiting] transgender women from competing with other women in sports at schools across the state, ranging from public elementary and secondary schools to public colleges and universities.”

Even before Noem’s enthusiastic tweet, the ink on Mississippi’s new law on fairness for female athletes was still damp.

“Mississippi legislators have passed a bill that would ban transgender athletes from competing on female sports teams in schools and universities — one of over two dozen similar measures proposed by state lawmakers nationwide this year.”

You read that correctly, two dozen states are entertaining the same idea in their legislatures. Let’s revisit that in a moment.

Tennessee passed one that should give us pause for thought on what is going on with Governor Noem’s head fake.

“According to Tennessee’s bill, student athletes would be required to prove that their sex matches that listed on the student’s ‘original’ birth certificate in order to participate in public school sports in middle and high schools.”

Smart readers catch the difference. Arkansas and Mississippi apply the new laws to public colleges and universities, Tennessee stops at the high school level. Why?

Governor Noem spells it out. The NCAA is bullying states to exclude college students in bills addressing transgender athletes by threatening costly legal action and withholding large sports events in her state. She spells it out clearly with Tucker. The transgender bill before Governor Noem, that she was so excited about, is about to get watered down before your very eyes.

Why is the NCAA such a big deal? Why is it a big deal to include college level sports in this legislation? Scholarships.

“Selina Soule spent years training in the hopes of securing a college scholarship and leaving behind a legacy at her high school by setting new records in track.

But those plans were temporarily put on hold one day at the Connecticut Indoor Track & Field State Championships in 2019 when she placed one spot away from qualifying for the finals and the subsequent opportunity to compete at the New England Regional Championships.

That meant missing a crucial opportunity to compete in front of recruiters and secure financial aid that would help alleviate the heavy burden of the cost of college for her family. Two competitors in that race went on to the New England regionals, with one of them setting a girls’ record for the 55-meter dash and later winning two titles. They now hold 15 state women championship titles and 17 school records.

Who are they? Biological men who identify as women.”

How about the Olympics? Since, many female athletes look to further their sports careers by qualifying for the Olympics, that is a valid question. Compared to their male counterparts, professional soccer and professional basketball are about their only option. The International Olympic Committee opened the doors for biological males to compete with women in a 2016 decision. They were going to revisit that decision after the 2020 Tokyo Olympics that never happened because—COVID.

Newsweek – yes Newsweek – opined on the topic recently regarding biological males competing as females in the Olympics.

“Imagine a world without Flo-Jo, without Venus or Serena Williams, without modern-day Olympian runner Allyson Felix. That is the world brought about by advocates of transgender-identified biological males competing with women in sports: contests so lopsided that our greatest female athletes never qualify for the Olympics, never make it to Wimbledon—let alone astound us there, with feats of the gods.

Consider Felix, a contender for the title of fastest female sprinter in the world, who holds more Olympic medals than even Usain Bolt. Her lifetime best for the 400-meter is 49.26 seconds. Based on 2018 data, nearly 300 high school boys in the U.S. alone could beat it.”

One sticking point that will make readers snort coffee out their nose is the NCAA’s guiding principles regarding transgendered athletes. Principle number three states,

“The integrity of women’s sports should be preserved.”

Let’s all agree that ship has sailed in today’s gender bending culture. Clearly, if preserving the integrity of women’s sports were really a principle the NCAA lived by, why all the lawsuits and venue threats? I’ll wait with great anticipation for their answer in the comments. Patiently.

Here’s something for Governor Noem to consider as she decides if she will sign it in it’s current form protecting female college athletes, or veto it…

Only girls should play girls’ sports. Given the legislature’s failure to accept my proposed revisions to HB 1217, I am immediately signing two executive orders to address this issue: one to protect fairness in K-12 athletics, and another to do so in college athletics. (1/3)

While the freshly minted executive order says all the right things to preserve women’s sports, so does the legislation she seems hellbent on not signing. She punts the issue to a special legislative session in May or June, who knows… Clearly this is an issue her red state, and others, want. Governor Noem is clearly wavering after coming out so strongly in favor of it. Can you hear that sound? It’s the sound of yet another Republican trying to find their spine after losing it.

If over two dozen red states pass legislation confirming the already few opportunities afforded to females in sports beyond high school, the NCAA will have a lot of lawsuits to manage. In addition, the NCAA would be limited to holding tournaments in about twenty states. In that very likely scenario, they might be getting a taste of their own medicine if you ask me.

Seems like the NCAA got a two-fer in this deal; women’s sports in South Dakota and Governor Noem’s political future.