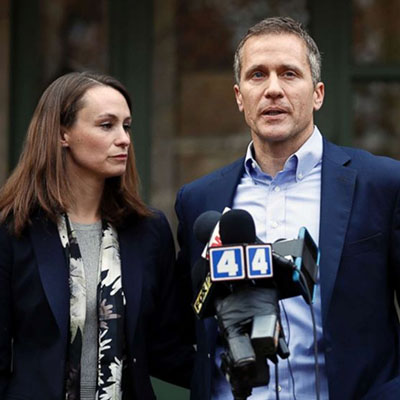 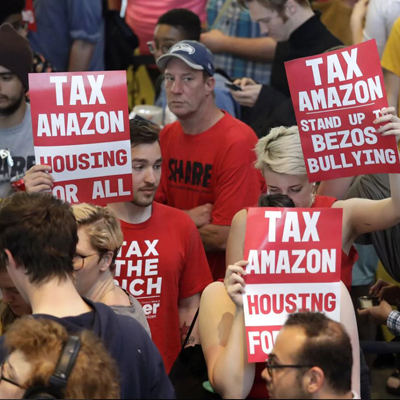 by Beege Welborn in Headlines 9 Comments

The cuddly socialists of the Seattle City Council got together for some old fashioned Kurt Cobain headbanging Monday afternoon. They must have been wearing protective headgear, to protect eardrums from the yowling that went up as they passed their “scaled down” head tax on large employers.

And they didn’t leave any council members out in the cold on the maneuver either. This blatant money grab was a 9-0 slam dunkaroo.

The ordinance will impose a tax of $275 per employee, per year on for-profit companies that gross at least $20 million per year in the city — down from a $500-per-head tax that Mayor Jenny Durkan threatened to veto.

About 3 percent of Seattle businesses will be affected, according to the council.

“We have community members who are dying,” Councilmember Teresa Mosqueda before the 9-0 vote. “They are dying on our streets today because there is not enough shelter” and affordable housing.

Oh, there is no doubt that there are people on the streets of Seattle in record numbers. But the council might want to look at a few of the economic factors (in addition to a relatively comfortable climate) driving that before they go raiding the pockets of the area’s larger employers.

Some opponents of the measure called for greater accountability on how funds addressing homelessness are spent. John Wisdom, 61, Seattle, a retired executive with PACCAR manufacturing, cited hundreds of millions of dollars already spent by surrounding King County to address the issue in recent years.

“The spending keeps going up and we’re not seeing results. The results are getting worse every year,” he said.

Seattle and King County declared a state of emergency over homelessness in 2015, but since then, cost-of-living pressures have worsened. The number of homeless students in the city’s public schools has tripled, to nearly 4,300 last school year. Seattle home prices are rising fasterthere than anywhere else in the country. The median price for a house is now $777,000.

I mean, take a look at the front page of Monday afternoon’s Seattle Times – on the same page that they announce the vote, they talk about people having to leave the city to live on boats, BUT. There’s no room at the dock! 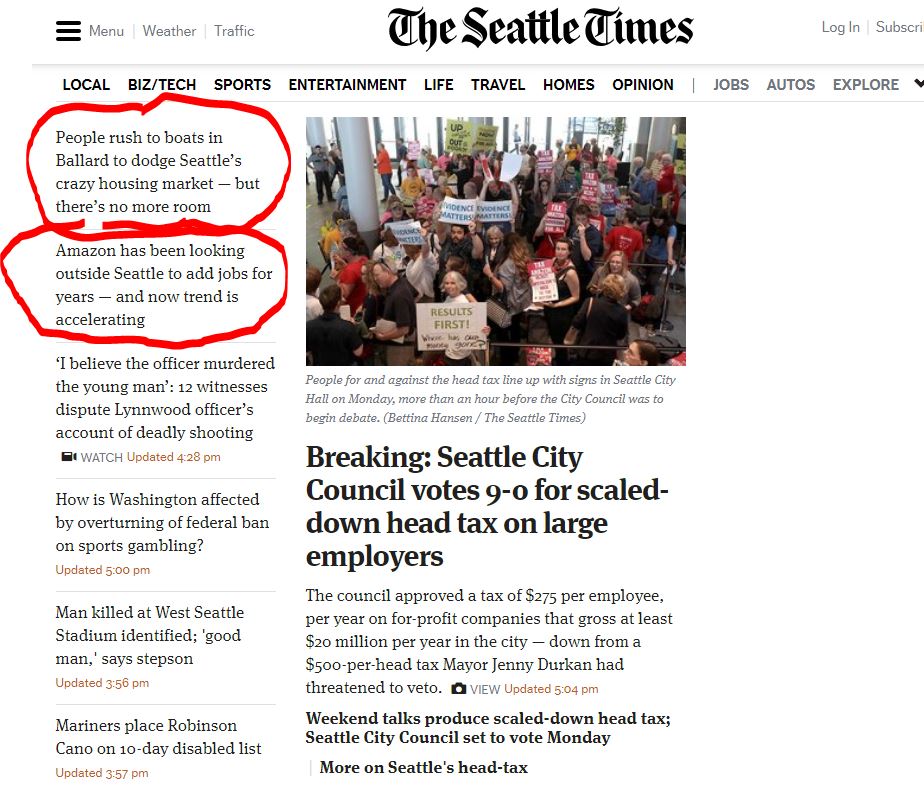 It’s hard for anyone to cough up the cash for your average crib at three-quarters-of-a-mil, especially if you’re working the line at Amazon or pulling bags out of airplane bellies for Alaska Air. And it’s easy to blame Amazon execs for the prices of rentals, etc., rather than address what’s really going on in your rapidly stratifying burg. But the way NOT to worsen what you’ve already declared a “crisis” is to piss off employers who were already alarmed enough to be thinking of moving elsewhere. Who were already alarmed enough that they sent an “open letter” to the City of Seattle and its grabby pants council telling them – in no uncertain terms – where they stood on the proposal. And exactly what the ramifications could be:

The City Council’s proposal for a “head tax” is not a solution. Instead of a strategic plan to address growth, the Council has proposed to tax only 3% of our city’s largest business, charging them a flat rate per worker they hire, making businesses pay a price for creating jobs. This is like telling a classroom that the students who do the most homework will be singled out for detention.

We oppose this approach, because of the message it sends to every business: if you are investing in growth, if you create too many jobs in Seattle, you will be punished. Sending this message to entrepreneurs, investors, and job creators will cause far greater damage to Seattle’s growth prospects than the direct impact on the businesses being taxed. Not all of the undersigned are directly impacted by this tax, yet we all agree it is a bad idea.

By the way, the same Seattle Times in the screen cap above noted on May 9th that the head tax would, ahem, also apply to them. And, in light of the dismal state of the newspaper industry in general, money was tight and, um, they would have to think about, you know, staying in Seattle if the council went ahead with this.

The company has more than 400 employees based in Seattle, most of whom are full-time, Fisco said. The tax, proposed by members of the City Council, would be levied in 2019 on companies with at least $20 million in 2018 revenue in the city of Seattle.

Fisco said the company is concerned that the so-called head tax “will be an additional financial burden that will take resources away from our news gathering and business model transformation.”

As proposed, the tax would become a 0.7 percent payroll tax in 2021, which would likely lead to an increased tax bill, Fisco said. That’s the same year The Times’ lease expires in the increasingly expensive South Lake Union neighborhood.

While the company has yet to begin a formal process of looking for another location, Fisco raised the possibility that The Times could look for new offices outside the city of Seattle.

There were about 100 marchers who headed to Amazon’s campus on Saturday  and the Washington State Attorney General had to slap some sense into the more rabid tax advocates:

Washington State Attorney General Bob Ferguson has slapped down a union-backed activist group’s call for a felony prosecution of Amazon over the company’s threat to dial back job expansion in Seattle amid the city’s debate over a head tax on large businesses.

Working Washington, a Seattle-based activist group, had publicly asked Ferguson in an open letter to charge Amazon with the crime of “intimidating a public servant” – a class B felony under state law. The group is supporting the head-tax plan backed by five City Council members to raise an estimated $75 million a year for housing and services aimed at the homelessness crisis.

The prosecution request already had been met with skepticism and even mockery from some legal experts, who said the group was twisting a law aimed at protecting public officials from personal threats.
Ferguson, a Democrat in his second term as attorney general, agreed Friday that Working Washington’s request was legally off base.

Criminal charges. For publicly stating your opposition to a proposed policy, asserting its impact on your bottom line and your choices in dealing with it.

Working Washington spokesman Sage Wilson responded in a texted statement: “It is extraordinary that Amazon’s subprime mob boss behavior was so brutal it ignited a citywide debate over whether it was actually in fact criminal. All this because the richest human in the world wants to try to avoid stepping up to address our city’s homelessness crisis.”

Unhinged. These people have all lost their minds. And demand your money to indulge their insanity with.

Some of the message got through the noise, because the mayor signaled she would actually veto the original, un-sunsetted version of $500 head. “Compromise” became the word of the day.

The one openly Democratic Socialist on the council used her extensive business experience as an excuse to harangue the mayor.

The tax approved Monday is much smaller than a $500-per-head proposal that had been under consideration for many weeks.

Councilmember Kshama Sawant cast the only “no” vote Monday on an amendment that reduced the size of the tax.

“There is no way this tax will be a burden on big businesses in Seattle,” Sawant said, slamming the mayor for siding with “Amazon billionaires.”

Given extortion from @JeffBezos & Goliath-like clout of @amazon, even a smaller tax is huge victory & pushback on corporate bullying. BUT imagine what our movement could've won w CM's who fought w us rather than limiting themselves to what's acceptable to big biz & establishment.

Oh, MY BAD. She HAS no business experience. She’s a Left Coast Bernie Sanders: a part-time college teacher who couldn’t get her contract renewed, so she ran for office. Now, apparently, “economics expert,” as all Socialists are with other peoples’ money.

Sawant was the only “nay” vote on the “reasonable” compromise of $275/head plus a 5 year sunset/renewal vote the mayor wanted to avoid a veto, and the council went along with it Monday afternoon.

Amazon was not thrilled, but they resumed the construction trucks rolling, saying “We remain very apprehensive…”

…The city does not have a revenue problem — it has a spending efficiency problem. We are highly uncertain whether the city council’s anti-business positions or its spending inefficiency will change for the better.

So. What’s next for Seattle and her big time businesses? This five year deal gives the city $49M ANNUALLY (vice the original $75M) to do…what?

They haven’t articulated that precisely and we all know how fresh money into government coffers has a POOF! factor to it. Victory Girl Deanna Fisher tells me that your everyday Joe in Puget Sound is PISSED. I hope he/she votes like they are.

If cooler heads prevail, the State Legislature might even intervene. They have that power:

A Democratic senator said that the Washington State Legislature may step in and stop the Seattle City Council’s head tax on business if it does pass.

“Our message at the state level is, we’re trying to get businesses to invest in Washington state under the premise that we’re going to be their partner, not their enemy,” Mullet said. “And if you have the largest city in your state completely undermining that message, I think it’s a real problem.”

Might just be in everyone’s best interest if they went on ahead and squelched it, stat. It’s easy to make Amazon the bogeyman, but over 100 business leaders signed that letter. If the Seattle Times is testing the waters for a move, the Amazon Villain is going to be a hard sell, when they’re the only ones left in the city. Their bazillion dollar bottom line gives them leverage Alaska Air and those smaller companies don’t have. The influx of businesses TO Seattle will slow to a molasses in cold weather crawl. It’s a poisonous atmosphere for business. Until they change it, Seattle is out to lunch.