Next post
Upper Echelons Of Military Too White - NY Times 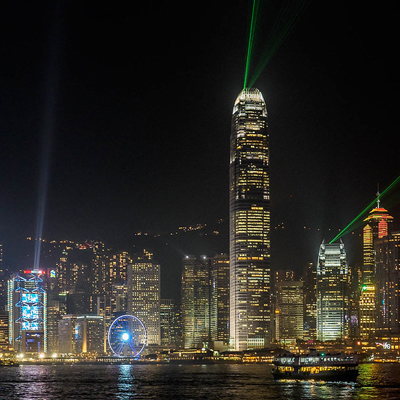 While American citizens worry — and with good cause — about government overreach during this pandemic, China has upped their own oppression game. On May 22, Beijing proposed a national security law on tiny and recalitrant Hong Kong. It may be the end to Hong Kongers’ dream of democracy.

Now China would tell you that the proposal came about as a result of a legislative session. Two organizations, the National People’s Congress and Chinese People’s Political Consultative Conference, met in the annual “Two Sessions” meeting last week. These groups then voted to enforce a national security law upon Hong Kong.

But you know that when communist nations use the word “people’s” in a title, it has nothing to do with the will of the common people. In fact, both the groups who met are made of Chinese elitists who are happy to rubber-stamp whatever Beijing wants. And what Beijing wants, Beijing gets.

The national security law would allow China to crack down on “subversion, treason, and sedition” in Hong Kong. In other words, Hong Kongers will lose their freedom to protest.

Hong Kong barrister Wilson Leung noted in a tweet that when China passed its own national security law in 2015, it didn’t apply the law to Hong Kong. But that was then. Today Beijing breaks its promises to allow HK to maintain her autonomy.

“It is imperative that the Hong Kong national security legal system and enforcement mechanism must be established without the slightest delay.”

“It’s time for the United States to give up its wishful thinking of changing China.”

Beijing’s toadie in Hong Kong, Chief Executive Carrie Lam, stands ready to punish “violent political elements,” even though in January she pledged that Beijing was not tightening its noose around Hong Kong.

A Hong Kong government spokesman also spoke up in support of the law, saying that it will “only target acts of secession, subversion, terrorist activities,” plus “the vast majority of law-abiding Hong Kong residents . . . have nothing to fear.”

To put it another way, don’t speak out against the government. Otherwise they’ll call it “subversion” and arrest you.

Not only that, but Hong Kong police welcome the new security law. Security minister John Lee said in a statement:

“Terrorism is growing in the city and activities which harm national security, such as ‘Hong Kong independence’, become more rampant.”

So much for the “One Country, Two Systems” form of government for Hong Kong. So much for free speech. The national security law also marks the demise of the the pro-democracy government Hong Kong voted into office just in November.

Naturally, Hong Kongers did not passively accept this measure. Even though Beijing warned them not to assemble, pro-freedom demonstrators rallied on Sunday — coronavirus or not.

One image in particular emerged from the Hong Kong protests, which showed a protestor standing defiantly in front of a police van. It reminded many across social media of the courageous Tank Man from the Tiananmen Square massacre in 1989. 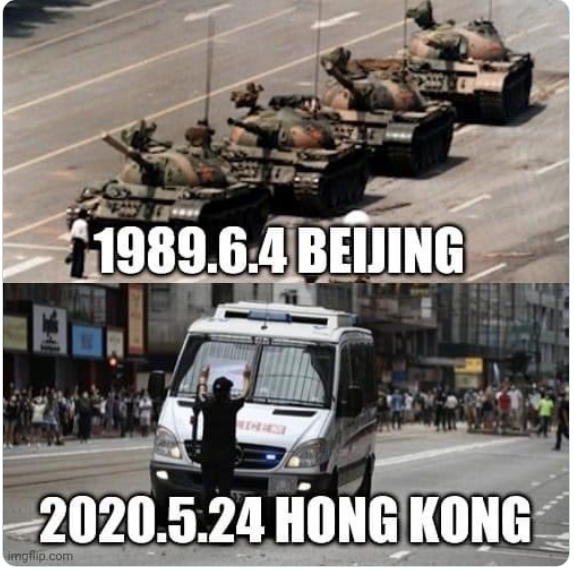 The national security law hasn’t just been used to crack down on protests, either. Jeffrey Ngo, a Georgetown Ph.D. student from Hong Kong, posted an account on Twitter of how police arrested two of his colleagues in the pro-democracy group “Demosistō.”

The two weren’t protesting in the streets, however. As coronavirus entered Hong Kong, they began importing masks from the United States. Then they began making their own, and that offended Beijing.

“In light of Carrie Lam‘s politically-motivated inaction early on in the pandemic, we imported 1.3 million masks for Hong Kongers from the Americas. We soon also started selling our own, branded as “Not Made in China“ on the package to obscure their origin.”

Apparently that’s a violation of China’s “Trade Descriptions Ordinance.” And that is worth an arrest, even though the masks meet all relevant protective standards, writes Ngo. Still, the public is recommended against using them. How ludicrous, he continues. Moreover, Ngo adds that Beijing has also confiscated the passports of two prominent pro-democracy leaders, Joshua Wong and Agnes Chow Ting.

Other countries have noticed how China is destroying Hong Kong’s freedom. Over 200 policymakers from 23 nations have formally condemned the national security law, including the former British foreign secretary Malcolm Rifkin, as well as parliamentarians from Europe, New Zealand, Canada, Australia, India, Indonesia, South Korea, and Malaysia. Sens. Ted Cruz, Marco Rubio, and Josh Hawley also added their signatures to the condemnation, which reads in part:

“This is a comprehensive assault on the city’s autonomy, rule of law, and fundamental freedoms. The integrity of one-country, two-systems hangs by a thread.”

Even little Taiwan has vowed to provide “necessary assistance” to Hong Kong.

Plus, U.S. National Security Adviser Robert O’Brien threatened to revoke Hong Kong’s trading privileges if China enforces the security law. That move would mean that the same tariffs that the U.S. places on goods from China would also be placed on those from Hong Kong.

But in all seriousness, does anyone think that any of these sanctions will change Beijing’s mind? Soaring words and high-minded ideals mean nothing to Communist China and President Xi Jinping, for whom Hong Kong has long been a thorn in his side. Not only that, but since the coronavirus has wracked China’s economy, Xi is using the national security law to show strength.

These are truly frightening days for Hong Kong. Will she survive? Pray for her, and keep your freedoms close, especially in our own times of government overreach.