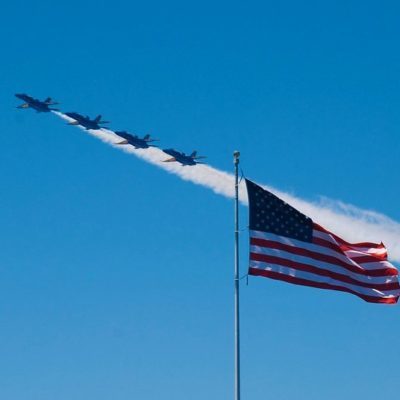 If you haven’t begun questioning Independence Day, you are behind the eight-ball, according to our media outlets. AP News called President Trump’s appearance at Mt. Rushmore “fiery”. The Guardian called the display “divisive“. Politico called it a “complete disaster” and CNN is wanting viewers to “reexamine Independence Day”.

We had the protestors at Mt. Rushmore last night:

And then, CNN (cough) journalist (cough), Leyla Santiago, had the following to say yesterday about Trump’s Mt. Rushmore appearance:

Kicking off the Independence Day Weekend, President Trump will be at Mount Rushmore, where he’ll be standing in front of a monument of two slave owners and on land wrestled away from Native Americans told that uh, be focusing on the effort to ‘tear down our country’s history.’”-Leyla Santiago

CNN also came up with this analysis:

Such frivolity might seem in poor taste amid a fast-worsening pandemic — and unwise since social distancing won’t be required at the event. But the holiday that celebrates independence from Britain is being used to bolster Trump’s false narrative that the country is doing just fine.”-Stephen Collinson and Caitlin Hu

Trump was (GASP) “hosting another big social event during a pandemic“, they said. Trump will visit the site with a “dark history”. Mt. Rushmore would be center stage to a President “who has stoked racial animus since he first entered the political arena”. (CNN’s words, not mine.)

CNN’s spin on President Trump’s Mt. Rushmore visit was a far cry from their take in 2016 when Bernie Socialist Sanders went to South Dakota:

Bernie Sanders said "this is our country at its very best," called it an "incredible achievement," and said it "really does make one very proud to be an American." pic.twitter.com/YQ7ozKKICs

And even though nobody loves Jim Acosta more than, well, Jim Acosta…Jim Acosta referred to the Obama standing in the “stolen land in front of two slave owners” as “majestic”. Then, there’s also this:

Well, would you look at that. https://t.co/N2qJcyqiMQ

The 4th of July, America’s birthday, has been reduced to “frivolity” and a “social event in the midst of a pandemic”. Celebrations have been called “divisive”. All of this while CNN, and others, suggest Americans re-examine Independence Day. Since when is celebrating our independence frivolous? Since when is it just relegated to a “social event”? So happy to know that these straw-brained journalists see a celebration of our country, The United States, as a mere “social event” that we all should be “distancing from” during the time of a pandemic. Strange, isn’t it, how weeks ago it was encouraged for Americans to stand “united” in solidarity and in protest because they were exercising the First Amendment rights. Orange Man, fireworks show=BAD. Four presidents carved into a mountain? Two were slave owners=BAD. An increase in COVID-19 cases? Protests at the entrance to Mt. Rushmore? Okay. Americans gathering for Trump’s speech and fireworks display=BAD. Independence Day is bad because the premise of it all is so racist. And media outlets like CNN make mere suggestions in their news” stories that Americans question “racial reckoning” on Independence Day. Let’s fill Americans with more uncertainty, shall we? Especially the weak, impressionable ones.

The only truth CNN can muster up is a recap of Trump’s statements from last night:

Those who seek to erase our heritage want Americans to forget our pride and our great dignity, so that we can no longer understand ourselves or America’s destiny. They would tear down the beliefs, culture and identity that have made America the most vibrant and tolerant society in the history of the Earth.”-President Donald J. Trump

Let’s let that sink in. Politicians, in collaboration with our media, want Americans to feel uncertain and to no longer understand their identity. This is how a society becomes dismantled.

Look for ways to increase insecurity, anxiety and uncertainty.-Saul Alinsky, Rules for Radicals

So, on this Independence Day, reflect upon this. Celebrating our independence is not a mere social event. It is not frivolous, as some dare say. I know I will be thanking God today that America opened her arms to my immigrant family members who were tired, poor, huddled masses yearning to be free. I am certain that America is my home. I am proud of her and love her with every fiber of my being. Some may be questioning the celebrations today and to them I say-if you are really questioning this-the door os open and you are free to leave. Go to where you are not uncertain, as CNN suggests you may be. Seriously. Make an exit strategy. You may want to reconsider the countries of the EU, though. They don’t want you, huddled masses yearning to be free of Orange Man because you may have COVID-19. You diseased American, you. But-wait for it-they’ll gladly take travelers from China! Ain’t that a kick in the pants?!

From all of us at Victory Girls to all of you and yours-God Bless America!