Next post
Richard Sherman Talks Smack. Why Is This Shocking?

by Melanie in Headlines 6 Comments

It appears that Prince Charles is preparing to take over the throne as Queen Elizabeth scales down her royal duties.  The Queen, who will celebrate her 88th birthday on April 21st, is passing more of the royal responsibilities to Prince Charles. One of the more telltale signs is the merging of Charles’ media staff with the Queen’s media staff.

The heir to the throne will also accompany his mother to the beaches of Normandy later this year.  The trip is to mark the 70th anniversary of the D-Day landings, Charles accompanying the Queen on the trip further adds to speculation that it may be the monarch’s final engagement overseas.  A French government official, who was involved with organising the D-Day anniversary events, revealed that: “We have been told this will probably be the Queen’s last official foreign visit.”

Queen Elizabeth has probably waited this long to retire since Charles needed an especially long time to grow up.  Perhaps he’s up for his kingly duties now that he has sown his wild oats.  Hopefully his scandalous days are  well behind him. 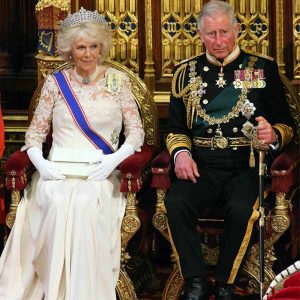 After reading some trivia about Prince Charles, we now know that the future Kind of England loves poached eggs on many dishes, he once sent a bottle of Scotch to recovering alcoholic Ozzy Osbourne (a special kind of insensitivity!), his vegetables must be steamed in a particular brand of mineral water, and most unimportantly, he sleeps in the nude – always.  Now that’s a disturbing mental image.

It will be interesting over the coming weeks and months to see how they go about transferring the crown from Queen Elizabeth to Prince Charles.