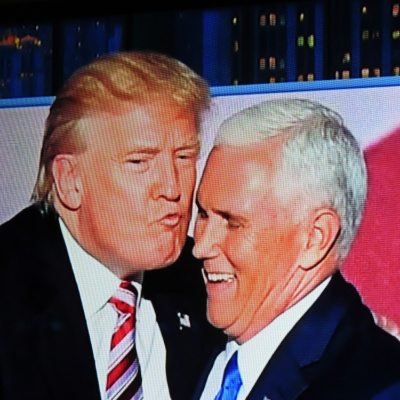 Oh for the love of pecan pie. There is so much scary shite going on in the world. The Chinese city of Urumqi is a powder keg and all of China may go up. The Church of England is claiming that Jesus was Trans. AND, on December 9 the railway unions may go on strike, Merry Christmas, ya filthy animals. In normal times, those would send the world screaming, but these are not normal times. Donald Trump had two anti-Semites to dinner and now Mike Pence is calling on Trump to apologize to the world for his heinous error.

Before we begin, here is a video with a description of the mogul Kanye (Ye) West and Nick Fuentes, who is a White Nationalist.

Mike Pence is on a book tour and trying to burnish his image, but make no mistake, he is running for President. Who is his constituency? Who knows. His book is called “So Help Me God”. I have not read it, but it is said to be a fulsome recitation of the victories of the Trump Administration.

Here is the relevant portion of the News Nation interview with Leland Vittert:

Former VP Mike Pence says Donald Trump should apologize for dining with a Holocaust-denying white nationalist, but said he doesn’t believe the former president is antisemitic. Watch the full interview on NewsNation tonight at 7p/6C. Find us on TV: https://t.co/TkQWhMl5oB pic.twitter.com/KEFBO8qa0j

I don’t know why but there is something skeevy about Mike Pence. I am sure he is a good and sincere man, but I wouldn’t trust him with an empty bottle of Dr. Pepper. He doesn’t seem humble. He seems, and I hate using this word, sanctimonious. This isn’t a fair question, but as a Christian, how do you change hearts and minds if you don’t engage with people? That’s like the front pew people who are horrified that a former hooker walked into their church. If a Holocaust denier, anti-Semite, and or White Nationalist come to your club, do you refuse them entrance and harden their hearts? In his first Inauguration, Barack Obama said:

To those who cling to power through corruption and deceit and the silencing of dissent, know that you are on the wrong side of history; but that we will extend a hand if you are willing to unclench your fist.”

Clinging to power through corruption, deceit and the silencing of dissent would certainly describe Holocaust deniers and White Nationalists.

Here is how the Wall Street Journal reported the Pence interview:

The dinner controversy again forced Republicans into a position of reacting to the actions of Mr. Trump, who earlier this month announced he is running for president again. GOP senators returning to work on Monday criticized the meeting.

Sen. John Thune (R., S.D.), called it “a bad idea on every level. I don’t know who is advising him on his staff, but I hope that whoever that person was got fired.”

The meeting was “ridiculous and that’s all I’m going to say about it,” said Sen. Joni Ernst (R., Iowa). Sen. Rick Scott (R., Fla.) said: “There’s no room in the Republican Party for white supremacism, anti-Semitism, so it’s wrong.”

Members of the Democratic caucus said they had come to expect such actions from Mr. Trump and called on Republicans to denounce his actions.

Mr. Trump, who lost his bid for reelection as president in 2020, already is facing legal problems and resistance from some fellow Republicans who want to see another party standard-bearer emerge for the 2024 election.

I don’t know if Donald Trump was seriously worried about his friend, Ye. Maybe it’s common among the extremely wealthy to show up with extra guests. I wouldn’t know. 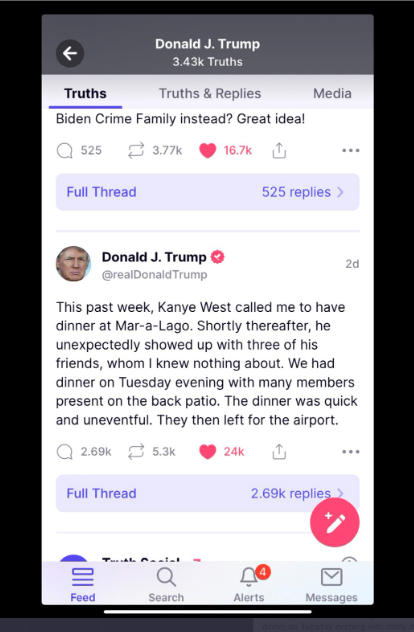 Trump’s daughter, son-in-law and grandchildren are Jewish, but that doesn’t mean he couldn’t be an anti-Semite. I refuse to believe it. I would still vote for him and will vote for him, if the Good Lord is willing and the creek don’t rise. We have two years for this to all shake out. The Never-Trumpers and the Democrat Media Industrial Complex will not stop. EVER.