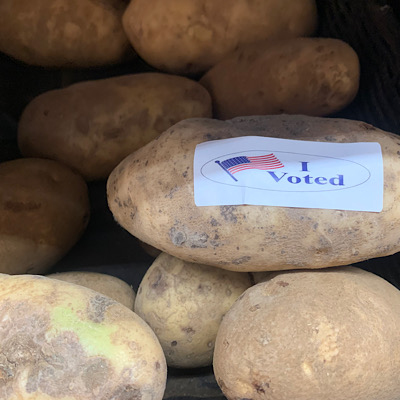 by Guest Writer in politics 4 Comments

Paladin offers his congratulations to the Mandarins of Socialism – you did good. To enhance his social credit score Paladin unequivocally states: “We congratulate the Mandarins on your enlightened administration of our lives.”

With lockstep media adoration, uniform messaging, demonization, and threats of impending child murder, the Mandarins of Socialism draped half the electorate in a bloody, stinking cloak. Then damned everyone and anyone who opposed or even questioned them and energized, cowed or “counted” precisely enough of the electorate to keep their blue noses above water.

True, many of us wanted (and the country needed) to see the Mandarins tarred, feathered, and run out of town on a rail. But this was not to be. Their greatest achievement was stitching the term MAGA and DENIER as scarlet letters on every patriot’s breast. And urging every potato head voter to whisper, Eeek a mouse. Then jump on a dining room chair in a crise de nerfs electing yet another goiter to government.

Paladin is not going do win/loss columns, though there are certain to be mitigating MAGA wins in the coming days. Other than stating the obvious, that if the blue half of this electorate were in charge during WWII – the East Coasters would be speaking German, the West Coasters speaking Japanese and Paladin would be a lampshade.

Let this single example stand for the rocks on which the blue tide will ebb, where the Pyrrhic Potato Victory will finally die:

As for the RNC and all you other establishment Pom-Pom Girls – ignore AZ, we dare yah, ignore the AZ steal and see your potatoes eaten by maggots. Do not ignore this fraud; fight and win as if your lives depended on it:

Furious Arizona GOPs slam ‘national disgrace’ at the ballot box as 17,000 votes have to be RECOUNTED.

More than a national disgrace, it’s the playbook by which our fifth columnist red-faced establishment catamites guarantee the Blue Mandarins victory in perpetuity. An innocent child of the commentariat asks:

What’s the matter with Arizona?

What’s the matter? The fix is in, dumbass. It’s not about optics, Sherlock—it’s about securing a predetermined outcome.

“Don’t forget that our Secretary of State, Katie Hobbs, has ultimate supervisory responsibility for running a “free and fair” election, but is herself running for governor and is locked in a very tight battle with none other than Kari Lake.”

C’mon, Mr. MaGoo, it’s only a tight race if “the count” is tight. Mission accomplished. Once again, AZ counts votes and—poof!—Fraud in All the Right Places—National Tammany Hall? When did Powerline turn in to National Review?  We hardly noticed.

Babs Bee comes in for the knock-out — Republican Party Staves Off Red Wave. Man, that’s an old pic of Mitch McCuck. And Paladin gives a hat tip to Hillary and Bill coming to Hoctooey’s defense.  Good Job. Where was BushHitler during all this? Nowhere. Voted for you twice, yah bum.  Good riddance to you too, Mini-Monkey Nuts. You didn’t lift a finger.

For the Depressed yet Still Angry cowboy up:

But don’t look for any acknowledgment from our lickspittle Never–Whatevers, Red-faced ankle-grabbers and Mandarin class. They will ignore it, as they ignored every success Trump Magnus racked up—the new “true” story has been set and must be maintained. Trump Must Go.

Now we wait on the Trump/DeSantis death match.  Now we feed on the meat and bones of the two great soldiers who scattered the jackals from their DC lair and halted the Persian Hordes in the Sunshine State.

Anyone familiar with the story of Julius Caesar vs Pompey?

DJT you are Pompey now. But unlike Pompey Magnus, it is your duty to save the republic from the Blue Plague, not from the next Caesar.

While in certain ways yesterday’s election was somewhat disappointing, from my personal standpoint it was a very big victory – 219 WINS and 16 Losses in the General – Who has ever done better than that?

By launching an unprovoked attack on DeSantis calling him “desperate” in 2017 with “. . . low approval, bad polls, and no money, but he said that if I would Endorse him, he could win.” That’s cheap, petty and desperate.

Let this not be your political epitaph.

And Sorry Raheem, it’s not about “Blaming Trump” it’s about saving the Republic from the savage Blue Z-Nation Horde that’s eating our brains.

Alas, the kindest spin Paladin can manage now is like the man said in Moneyball, you were the  “First guy through the wall… ” This is what you did, DJT.  You did it.  Nobody else. No one owes you more than we do.  Will there ever be the reward you deserve? Or just the phony “Thanks, now take a hike.”?  You know the answer.

And the debt the nation and republic owe you, will never be squared. Ever. Somewhere in your briefing papers there is a gracious, magnanimous way to steer the movement you piloted off the shoals of defeat and civil war. Consider it again, Trump Magnus.

The real question remains, can De Julius Caesar burn down what needs burning down, drain what needs a draining and ram what needs ramming?  Will the Real Donald Trump help him do that?

But Paladin senses the answer is “No”.  Trump has become Pompey, and will die alone, betrayed and vanquished. A fate, none of us wanted for him or the country.

The Featured Photo used is the property of the author.