Next post
Victor Davis Hanson Has Ten Warnings for America 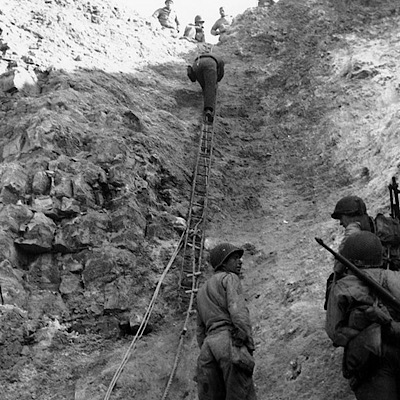 Gym Heroes. No, not the soldiers who clawed dirt under gunfire on the cliffs of Pointe du Hoc – the slope pictured above. Not them. How about VGirl readers? Not them either. No, not one VGirl reader is unaware of our current national shitstorm of malice and venality such as…

An invasion, our border overrun by plague–infected hordes.

Our corrupt capitol turned into an Orwellian Ministry of Love.

The establishment of institutionalized electoral fraud in perpetuity.

The promotion and sanctification of childhood castration. With only Orange Man Bad and a few others to condemn Child Genital Mutilation.

The blatant intimidation of an already  castrato Supreme Court.

Ownership of our most high elites by Communist China.

The relentless sycophantic protection of the Biden Organized Crime Family by a monolithic Praetorian media.

Safe to say, there’s not a single VGirl reader who is oblivious to the daily horror show. Not one. So let us now present the pomp and circumstance offered up as reality. Let us now praise famous yet inconsequential gym heroes. Paladin picks only two gym heroes to lampoon, two out thousands whose questionable virtues like the late scofflaw and addict DMX are thrust into our faces every day as something of critical importance.

First among them our current incarnation of Superman – Henry Cavill – who’s love life (according to MSN) means so much to so many.  Of course, no Superman would be complete without his own personal Lois Lane (a studio exec, perfect). In real life Hollywood, Henry Cavill wears a superman suit, but in real life London, Clark Kent and Ms. Lane wage a desperate battle in the masked virtue-signaling wars. Desperate battles that render the Man of Steel as just another big pussy in mom jeans.

The spirit is frilly, while the flesh is fake.

Not to be outdone, our ex-royal throuple (Paladin awards the ex-actress Doucheness multiple personalities) have magnanimously bestowed themselves on a grieving but grateful royal family for Prince Philip’s funeral. Well, a third of the throuple anyway. The ginger cuck will deign to attend grandpa’s burial, while the Duchess of Sussex aka, Madame du Barry  cannot.  Unlike the original Madame du Barry, the current one will probably never be accused of spiriting condemned aristocrats out of a Jacobin England.  But she might suffer the inevitable ‘woke’ culture tendency for guillotine justice . Bigger talents than hers have ridden the tumbrel.

Contrast these fakes and phonies to an earlier generation. Clark Gable flew real combat missions as a waist gunner in a B-17. That means he crouched in an open window in a freezing aircraft while real life Nazis tried to shoot down his crew and his plane. With real bullets. Check out these publicity photos – those are real black circles in waist-gunner Gable’s eyes.

Think Cavill could do that? Cuck Harry served and they say defended a position under attack – perhaps it’s not too late to commission him a portrait like the Duke of Marlborough at Blenheim. In any case Captain Cuck succumbed not to the embraces of Pathan tribesmen, but to a pussy-whipping actress. Frankly, Paladin wouldn’t give Captain Cuck 20 minutes in a B-17.

Nor any of our other modern gym heroes who aren’t fit to shine the boots of the men who assaulted Pointe du Hoc.

A truly desperate battle –but now disputed as possibly unnecessary.  Disputed by the painstaking research of a Brit historian and then twisted into myth-busting propaganda by the despicable cable WaPo. As anybody knows who bothered to watch or read The Longest Day – the assault troops of the  2nd Ranger Battalion clearly understood they’d been sent up a ladder to hellby mistake after arriving at the top. Nothing could be clearer to a soldier clawing up the dirt wall only for find empty embrasures and gun positions. They knew they’d fought their way up without any guns to spike. And everyone involved had to liveand die with that knowledge. But such is the grit and valor of real men charged with impossible tasks.  Men who meet these tasks any way they possibly can.

While our Gym Heroes cover up for safety and whose biggest task seem to be a nice stroll on the tony streets of London.