Previous post
Uvalde Police Did Nothing; We Lose Our 2nd Amendment Rights 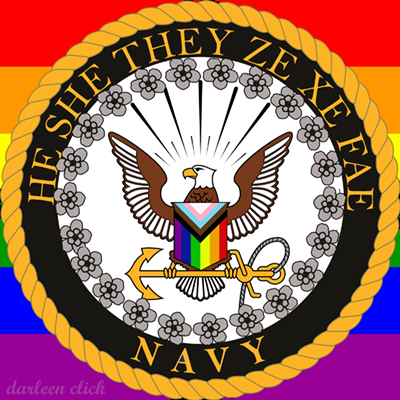 The U.S. Navy, 247 years old this year, is focused like a laser on…PRONOUNS.

Yes, you read that correctly. It seems that people in the Navy will be triggered and need to run to a safe space if someone misgenders them by using an incorrect pronoun!

The Navy is training its members to create a “safe space” by using proper gender pronouns in a new instructional video modeled after a children’s show.

“Hi! My name is Jony, and I use he/him pronouns,” Naval Undersea Warfare Center engineer Jony Rozon, who sports a rainbow-colored t-shirt, states in the video’s opening.

There is video and it is both hideous, laughable, and enraging.

The entire episode is just dripping with condescension. Evidently those in the Navy who will be flying jets to defend the skies, or manning the big guns on ships, or patrolling under water in submarines, need to ditch the ability to be battle ready and instead be concerned about addressing whomever by their preferred pronouns!

Meanwhile, China is laughing at us. No really, they are.

China on Friday launched its third and most advanced aircraft carrier from Shanghai’s Jiangnan Shipyard, with new combat systems that experts say are fast catching up with the United States.

Its electromagnetic catapult-assisted launch system is a major upgrade from the less advanced ski jump-style system used on the Liaoning and the Shandong, its two predecessors, according to the Center for Strategic and International Studies (CSIS), a Washington-based think tank.

The new system, similar to the ones used by US aircraft carriers, will allow China to launch a wider variety of aircraft from the Fujian faster and with more ammunition.

Read the above again. While we have the Navy dithering over asinine pronouns, China has launched a THIRD aircraft carrier with greater capabilities than the first two launched.

But he/they/him/her/she/we pronoun politeness is MUCH MORE IMPORTANT than battle readiness! Please, whatever you do, when getting ready to launch that plane off the deck in order to defend ourselves from China, Russia, Iran, or whomever, do NOT misgender the crew. If you do, please do the following:

“You correct yourself and move on, or you accept the correction and move on,” says Conchy Vasquez, an engineer with the Naval Undersea Warfare Center.

“The most important thing I can tell you is, do not put the burden of making you feel good about your mistake on the person you just misgendered.”

While misgendering is terrible, one must not pressure another person into divulging that person’s pronouns, according to the video.

“Some people may be going through the process of discovery, and they are not ready yet to tell you what their pronouns are, and that’s OK,” according to Vasquez.

Let me tell you what the “process of discovery” is and should be. You either address one another by your rank or your NAME. This pronoun bullshit is detrimental to our national security and battle readiness. It needs to STOP.

You cannot have a functioning military and indulge this pronoun nonsense. It’s a national security risk to the cohesion of the force, especially the they/them stuff. If you care more about your pronouns than your country, you should not be in the military. https://t.co/MtrUAjuPNn

And yes folks, it isn’t just the Navy. All branches are getting into the act of catering to pronouns, the LGBTQXYZ groups, and so-called extremists in the ranks. INSTEAD of concentrating fully on battle readiness.

Pride in all who serve. 🏳️‍🌈 pic.twitter.com/NqRYtK3HVc

Throughout June, the USMC takes #Pride in recognizing and honoring the contributions of our LGBTQ service members. We remain committed to fostering an environment free from discrimination, and defend the values of treating all equally, with dignity and respect.#PrideMonth #USMC pic.twitter.com/MOyvFmyJiB

Oh, but in response to this tweet, someone chimed in and said that focusing on Pride and pronouns would help people feel more “comfortable” in the military. Guess what? The military is not and never should be “comfortable.” War and training for war to bring peace is NOT by any definition, “comfortable.” If you are more worried about pronouns or too much whiteness in the military, then you are in the wrong job. Our military shouldn’t be catering to narcissism, and that’s what this is.

As I read through the articles about the Navy pronoun ‘look at MEEE!’ bullshit, a Village People song popped into my head. Today, they’d be accused of misgendering because of the prolific use of ‘you,’ ‘man,’ and ‘men’ in that song.

I guess being “In The Navy” is now only heroic if everyone makes sure that Captain He/Him/She/Her/They/Them is addressed by the correct pronoun, otherwise tantrums and running to find their safe space in the midst of battle will ensue.

Imagine a cutting-edge, time-sensitive, urgent naval emergency. And then imagine the sailors and Marines involved trying to communicate what’s going on through a welter of illogical and imaginary pronouns. If they can’t figure out who’s doing what to whom (and who is responsible for what), ships and planes crash, bullets fly, and people die. And even if they can figure it out, they may lose so much precious time that the outcome is the same.

Our national security is at risk because of the laser focus on pronouns instead of battle readiness, and yes, the world is laughing at us.