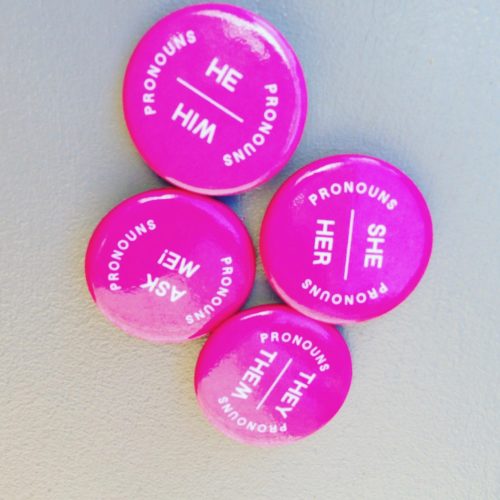 Oh, to live in the Democrat utopia of Rhode Island, where school committee members fight for Marxist agendas and not misgendering the children of the people!

I mean, I know some people in my neck of the woods here in the Pacific Northwest would be cheering this on. And Jennifer Lima, an elected school committee member in Rhode Island’s North Kingstown School District, is no stranger to pushing a radical agenda into the public school system. We will discuss this in a scosche. For the record, I identify as “Her Ladyship”.

Just a few days ago, Lima floated the idea on her official Twitter page and on other public platforms of which she is a part, that purposefully misgendering children is an act of violence. The act of violence of misgendering needs to be “dealt with accordingly”, according to Lima. From her Facebook page:

I recognize that some of you may find the use of the word violence in this post extreme.

Violence is defined by the World Health Organization as ‘the intentional use of physical force or power, threatened or actual, against oneself, another person, or against a group or community, that either results in or has a high likelihood of resulting in injury, death, psychological harm, maldevelopment or deprivation.’

Any act of violence in our schools which creates an unsafe environment (physically or emotionally by or for any member of the school community) needs to be dealt with accordingly.”-Jennifer Lima

Misgendering now is an act of violence. Okay. So, are we to call on the parents who are purposefully misgendering their children at an early age because Johnny played with a doll once and, therefore, is obviously a girl? Discuss.

Lima has played an active role in the North Kingstown schools for quite some time and is deeply steeped in the Diversity, Equity and Inclusion (DEI) initiatives within the district.

Of course, she is.

Now call me a troll, but this woman’s page is chock-full of leftist virtue-signaling. From Trans terminology to promotion for a celebration of a “Trans Day of Joy”, to a visual pyramid that outlines “Overt White Supremacy” and “Covert White Supremacy” from Anti-Racism Daily. Sooooo much to unpack, she says. She even dared to basically venture that MLK was wrong in his approach.

Imagine a privileged, WHITE woman challenging MLK. It’s interesting how Lima muses about blindness but cries that misgendering a person who obviously belongs to the opposite gender of which they want to identify is “an act of violence”. We’re to see Black people and recognize that they are indeed, Black and not see them as fellow Americans and recognize them for the person they are, according to this lot of (racist) loons. Roger that, Lima.

But when it comes to “seeing” a troubled junior high student having an obvious identity crisis? We’re not to “see” the harmful impact the road to transitioning at such an early age holds for these kids (many giving into peer pressure because gender bending is the new cool thing)? We just cannot go around misgendering them. We need to turn a blind eye here and not hit them with the grim realities of their God-given biology. To do so is violence and should be “dealt with accordingly”.

In thinking back, God, do I miss the 80s. You know, when peer pressure involved classmates asking you to skip school to drink a few Bartles and Jaymes stolen from a parent’s fridge and take a puff of a skunky-smelling, hand-rolled joint? Oh, do I miss rolling through the neighborhood and blaring backwards satanic messages from Ozzy on a boombox right about now!

This is not Lima’s first rodeo. Back in 2021, community members attempted to recall her from her post for promoting CRT and pro-Marxist ideologies. Another shocker, we know. Seems Lima has laid off the CRT/Marxist stuff for now and is on the misgendering bandwagon.

I also believe that purposely misgendering someone is an act of psychological violence when done deliberately and consistently and should be responded to accordingly.” –-Jennifer Lima

And what would the so-called “appropriate responses” be? The gulag? “Investigating and disciplining such occurrences in the same way as any other biased-based assault,” she says.

Shouldn’t mutilating one’s genetalia (or the intent to do so) be seen as an act of violence inflicted upon by a child’s parents or the medical community? Harmful sex-change surgeries and hormonal treatments can also cause “death, psychological harm, maldevelopment or deprivation”, also. Shouldn’t those people capitalizing on this utter dysfunction be dealt with accordingly, Lima?

Misgendering is an act of violence now, apparently. But, in all honesty, how can one NOT misgender a person when some organizations offer up over 100 gender and sexuality options to not only include the “traditional” she/her/hers, him/him/his but zie/zim/zis, fae/faer/faers” or tey/ter/ters?

And, with the way some of these kids (and their parents, sadly) change their minds, she/her can be he/him one day and far/faer (identify as a fairy) or nya/nyan (identify as a cat) the next. Wait, what? A child was misgendered because the school forgot to place litterboxes in the hallways! VIOLENCE! This needs to dealt with accordingly.

In all honesty, there is only One who can and will deal with this accordingly.