Previous post
Moderators Give Warren A Pass In #DemDebate

Next post
Romance Writers And The Bullying Woke Scolds 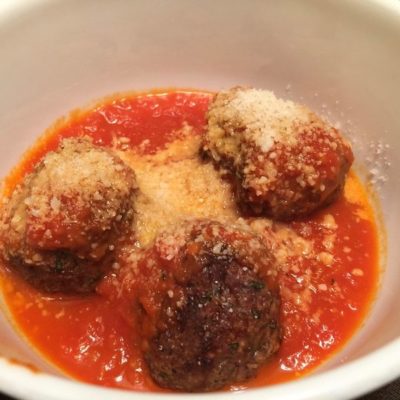 While Bernie and Liz were attempting to be “good friends” and Biden was dropping Obama’s name again, Mike Bloomberg/s campaign was busy lighting up Twitter last night with witty memes in an attempt to be dynamic. The forecast? Meatballs: cloudy with no chance of Bloomberg.

Face it, anything could have been more interesting than last night’s Democratic debate.

Test your political knowledge:
SPOT THE MEATBALL THAT LOOKS LIKE MIKE. pic.twitter.com/CkzdgwpzdI

Yes. Bloomberg’s campaign team is asking followers to find his face on a meatball. A meatball Bloomberg would forbid New Yorkers to eat because that portion pictured is way too large. Unless, of course, we’re talking one for each of the boroughs. Manhattan, Queens and Brooklyn, perhaps? (Staten Island and The Bronx will have to duke it out for the 4th meatball, we’re thinking.) This is what millions of dollars of marketing buys. Apparently, it is a marketing ploy of Bloomberg’s campaign gurus who thought it would be “fun” to post outlandish Tweets under the Team Bloomberg handle because “they promised to tweet stuff. They promised to tweet fun stuff. They promised the best stuff“.

Carb overload, Bloomberg. Need to balance that rigatoni out with some kale, don’t ‘cha think?

Less Tostitos branding than we expected. The candidates are barely mentioning Tostitos, which go great with dips, nachos or your favorite party snack recipe! #DemDebate

Seriously, didn’t you ban those in junior high vending machines back in the day, Mike?

Several of the other tweets included questions to participants about what would be the best body part to sport a Bloomberg 2020 tattoo? No, a tramp stamp was not an option. How’s about nowhere!

Issues that matter. Didn’t Bloomberg mention something of this in one of his commercials…you know one of the many ads he spent $100 million on? That $100 million (and then some) is also going to fund his PR staff and campaign staff who are managing this Twitter account. What do they come up with? Meatballs. We have tensions in Iran and a President who “started a war”, according to some of his counterparts, a climate crisis that is going to kill us all off in about 11 years, according to Greta Thunberg’s dad on social media and political injustice and inequality running rampant (sarcasm) in this country and Team Bloomberg is talking meatballs, rigatoni, Tostitos and tattoos? The fact that Bloomberg was well aware that his team were tweeting out this frivolity (and that he’s stupid enough to blow millions of dollars on it) makes no sense to me.

Although it would be hard to point to an exact moment where it was obvious to all that your campaign was dead, this has to be near the top of the list.

We think, if this was account was overtaken, Bloomberg and his camp would have been quick to blame the Russians. But Bloomberg’s team was behind this. In fact, Galia Slayen, a spokeswoman for the campaign, confirmed that the tweets came from the staff’s social media team in an attempt to try “something fun.” I’m going to borrow a word or two from my teenage son’s vocabulary right now: this was straight-up cringe. If Team Bloomberg is attempting to appeal to the younger crowd, they have failed miserably. If they’re trying to appeal to Italian-Americans, they need to just stop. But by the sheer mention of TikTok in this ridiculous feed dump, it’s my guess that they are appealing to individuals who cannot yet and will not be able to vote in November. Yes, really. TikTok. Who are they targeting? Twelve year-old girls? Thirteen year-old boys who load their Instagram feeds with cursed images? The only bad joke they’ve neglected to include in this feed is a funny pointed at moms who are not breastfeeding and need formula to supplement in feedings for their babies. That was really hysterical when Nanny Meatball pulled that stunt and locked up the Enfamil, wasn’t it, girls?

Seriously, Mike Bloomberg’s Twitter feed from last night was mildly entertaining in comparison to listening to a bunch of old relics in Iowa bicker and talk in circles. The forecast today? Cloudy with a not much of a chance of Bloomberg (as President, that is). Hey, Mike-I hear meatballs pair excellently with a gigantic Big Gulp.