McEnany Is A Counterpoint, Not A Journalist

Next post
Can We Trade Our Anarchists for Joshua Wong?

McEnany Is A Counterpoint, Not A Journalist 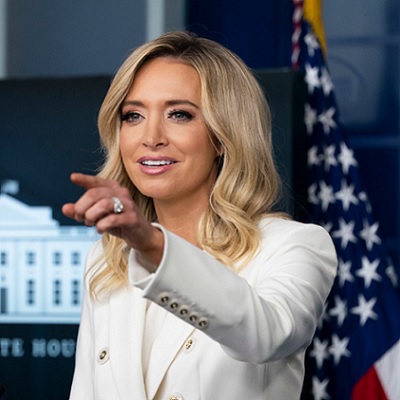 White House Press Secretary Kayleigh McEnany has utterly discomfited the press room by being both prepared and unflappable.

This is apparently a problem, according to Columbia Journalism Review. One of its journalism professors, Bill Grueskin, is complaining about McEnany and her methods. Apparently, she is “undermining the credibility of journalism” when she is criticizing the press. Or, in short – McEnany is MEAN, and she brings the receipts.

Press secretaries, both the good ones and the bad, have a job to do: sell the best possible versions of their bosses. To make that work, they must regularly slather the glossiest varnish on the gnarliest stories. When they’re most successful, they spin narratives to the president’s advantage, deterring or shading the most damaging stories while highlighting those that are most beneficial.”

McEnany does that, but her carping at press conduct and headlines has a deeper purpose. When she pivots from reporters’ questions to go off on unrelated diatribes, she is seeking to undermine the credibility not just of individual journalists or outlets, but of journalism itself. When confronted with a tweet or quote that might work to Trump’s disadvantage, she tries to undermine the press rather than to address the substance of the story. That is why she comes armed to briefings with multiple examples of press failure—some valid, some fictitious—and draws White House reporters into a noxious tit for tat.”

And we can’t have THAT, can we? After all, those brave souls who sit in the press briefing room are the best and holiest people among us! You know, people like Jim Acosta, April Ryan, and Yamiche Alcindor.

You know, the fact that we actually know the names of the press in the briefing room is, in and of itself, a problem that undermines the credibility of journalism. After all, if we know their names, it means that they made themselves the story at one point or another. That is a no-no for an objective reporter. Of course, none of these people, not even Professor Bill Grueskin, is objective.

Oh, I do believe we have found the problem here, and it isn’t Kayleigh McEnany. Perhaps the press room and Professor Grueskin all need mirrors to see what the real problem is.

You see, the press room was happy as clams when it was people like Jay Carney or Josh Earnest blowing smoke up their asses, as they asked former President Obama stupid softball questions about being “enchanted” by the office. Now, McEnany has to deal with idiots like Ryan Lizza.

Lizza is the Politico White House correspondent and a CNN contributor.

Ryan Lizza of course. What a waste of a briefing room seat. https://t.co/q9zijXfY4h

With questions like that, is it any wonder that McEnany brings her own examples of the media bias against the president, drops the proverbial mic, and then walks away with a smile on her face?

And then the minds supposedly molding the “journalists” of the future point fingers at McEnany and complain that “SHE’S UNDERMINING JOURNALISM BY POINTING OUT THAT WE ARE BIASED!”

Kayleigh McEnany is serving as press secretary. Her job, like all press secretaries past, present, and future, is to put the best possible spin on the news for her boss. If that means pointing out that most in the press room are biased hacks, she’s going to do that. That a journalism professor would pose as an offended party is hilarious. This is the media of the age. When they shed any pretense of objectivity, they lost any room to complain about being treated as biased hacks. McEnany is simply bringing fire to fight with fire. That Grueskin feels like he has standing to complain on behalf of journalism as a profession, says a lot about the state of the profession. But it isn’t an indictment of Kayleigh McEnany. Rather, that finger in the mirror is pointing back at the media.