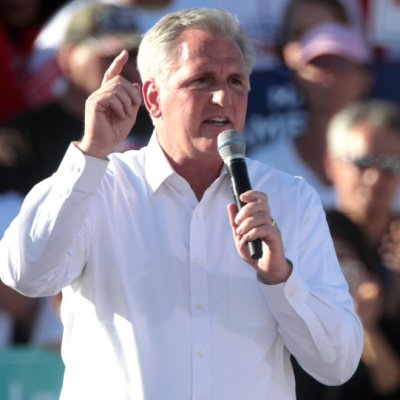 The Republican members of the House of Representatives are expected to hold their internal vote for Speaker of the House today. You may find this odd because, as of this writing, the Republicans have not taken the majority in the House. They are projected to win, but in this Election Season, that means exactly squat. They are going to take the vote anyway. It is being reported that the Conservatives in the Freedom Caucus are warning Kevin McCarthy, the current Minority Leader, that he doesn’t have the 218 votes to win outright.

If you have been reading Victory Girls Blog for the last week, you know I am not a fan of Kevin McCarthy. If you haven’t been reading VG for the last week, what in the hale have you been doing? Just kidding. I wrote last week that we need a PURGE of the leadership in the House and Kevin is on my list. I am Irish enough to think it’s tempting fate to anticipate a win before it’s official, but vote they will. Last night, NBC News reported:

Conservative lawmakers sent a strong message to House Republican Leader Kevin McCarthy on Monday, telling him he doesn’t have the votes to be the next speaker.

The warning shot came just one day before McCarthy heads into a closed-door election seeking to become his party’s nominee for speaker of the House starting in January.

The California Republican is expected to easily surpass the simple majority needed to win the nomination, but members of the conservative House Freedom Caucus are planning to put up a symbolic challenger to make clear that McCarthy can’t reach the magic number needed — 218 votes — in the formal floor vote when the new Congress convenes on Jan. 3.

Um, we (Conservatives/Republicans/MAGAs) need a little something, something more than SYMBOLISM. We do not need a futile and stupid gesture. We have two years to show Americans who we really are. We ain’t got time for shenanigans or capering about. Okay, I still haven’t forgiven McCarthy for the lie that Republicans were going to “repeal and replace Obamacare”. There never was a plan.

Personally, I like Louisiana Representative Steve Scalise and I thought I liked Arizona Representative Andy Biggs for strategic reasons. I mean, hello Arizona! Then I saw this tweet from “The Great One” Mark Levin.

Meanwhile, Jamie Raskin, Impeacher Renowned, (D-MA) is trying to scare the sheeples with the idea that Republicans will vote Donald Trump in for Speaker of the House.

I told you so… Lil Jamie Raskin seems worried this morning- Trump Speaker? This would be sooooo sweet if Trump announced this tomorrow. 😁 pic.twitter.com/ImyiIqiTAl

While I like Steve Scalise of Louisiana as Speaker of the House, he doesn’t want the job. Scalise has thrown his support behind Kevin McCarthy and Scalise has made it known that he wants to be Majority Leader often as in this video below:

To give the devil, Kevin McCarthy, his due, many Republicans are pointing out the work that he has done to recruit new and diverse candidates. Former Speaker Newt Gingrich endorsed McCarthy and explained his reasons in a Washington Times Op-Ed:

I joined the House Republicans at their planning session in Florida in the spring, which led to the Commitment to America. I was invited to join them in briefing the members on the Commitment in September as they prepared to launch it publicly.

You can see how much work and thought has gone into this positive platform. It is a much more thorough document than the Contract with America was. You can see more than 150 policy proposals if you go to CommitmenttoAmerica.com.

Beyond policy development, McCarthy asked me to join him for the last three days of campaigning. We went from Charleston, South Carolina, to Sarasota and Jacksonville, Florida, to McCallum, Texas (6 miles from the Rio Grande), and then ended the campaign with a rally in Virginia Beach, where Gov. Glenn Youngkin, Lt. Gov. Winsome Sears, and Atty. Gen. Jason Miyares joined us.

In 2020, Mr. McCarthy recruited women and minorities. When the so-called experts said House Republicans would lose 25 seats, he managed to pick up 15 (a turnaround of 40 seats from Democrats’ and news media’s expectations).

Since August, Mr. McCarthy, currently the Republican House leader, traveled to 39 states and campaigned with more than 170 congressional candidates. Punchbowl News noted his efforts at fundraising and credited what it called the “McCarthy Machine” with raising $500 million.

As you watch and listen to the various expert analyses of the election results, just remember that power on Capitol Hill has shifted decisively.

Arrgh. I am not sure I trust Newt either. At least the party vote tomorrow will take our minds off all of the losing we have done lately. That’s something. We won’t win again if the states don’t tighten up their voting systems. Election Season is not working for me.