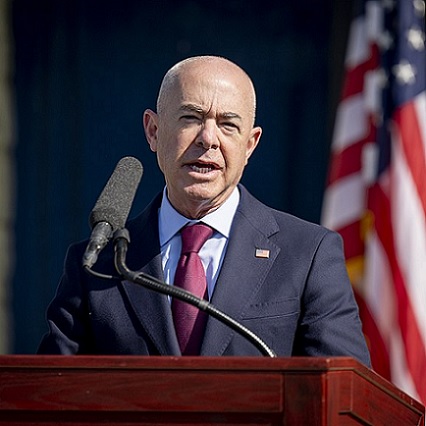 So much for border security. Under the Biden administration, anything goes so long as they can justify it to themselves.

Homeland Security Secretary Alejandro Mayorkas was on “Fox News Sunday,” and admitted to what we all knew: in order to get rid of the optics problem of warehousing people under a bridge in Texas, the Biden administration just decided to release Haitian illegal aliens into the United States wholesale.

“Approximately, I think it’s about ten thousand or so, twelve thousand,” Mayorkas told “Fox News Sunday” when asked how many have already been released. He then acknowledged that this number could very well go up as the 5,000 other cases are processed.”

The secretary said the administration “will make determinations whether they will be returned to Haiti based on our public health and public interest authorities.”

Mayorkas said that those who are released have conditions placed on them, “are monitored by us,” and authorities “ensure their appearance in court as the law requires.”

Host Chris Wallace noted that according to the Department of Justice 44% of those who are released miss court appearances. When asked whether many of the thousands who have just been released will just stay in the U.S., Mayorkas insisted that the system will work.”

Everyone else feel secure about the country right now? Mayorkas also had the nerve to insist that a wall is not the answer to stopping this from happening again, because… TRADITION.

Mayorkas says Biden administration opposes the wall because people crossing illegally is “one of our proudest traditions” pic.twitter.com/d5C7tjhnkH

Sorry, I’m not feeling much like breaking into a musical number from “Fiddler On The Roof” at the moment.

Wait, you say. Isn’t there a pandemic on? Were these people tested for COVID? No, of course not! Don’t be silly!

Biden Admin isn't serious about stopping Covid. So now it's time to ask is it intentional or incompetence. https://t.co/3c59MEickO

And remember that Jen Psaki said that this was all okay because these Haitian illegals weren’t planning on staying in the country, so they didn’t need COVID testing!

During Monday’s daily press briefing, Psaki was pressed on why there are so many steps pertaining to COVID-19 when flying into the country, such as providing vaccination proof or a negative COVID-19 test, but seemingly none for those who walk across the border.”

“As individuals come across the border, and they are both assessed for whether they have any symptoms, if they have symptoms they are,” Psaki said.”

“The intention is for them to be quarantined. That is our process, they’re not intending to stay here for a lengthy period of time, I don’t think it’s the same thing. It’s not the same thing.”

Uh yeah, about that…

.@BillFOXLA with a BRUTAL fact-check: “That was an interesting press conference…[Psaki] doesn't believe the migrants down here intend to stay for a long time. That’s news to these folks…They are not traveling from halfway around the world to go on a little camping trip.” pic.twitter.com/n3er4A1bdk

And now Mayorkas has freely admitted that the Biden administration does not care about the border, or COVID, or anything, really, except getting rid of the Border Patrol horses because of bad optics.

Could everyone please remember this the next time Joe Biden tries to scold the unvaccinated for not obeying his mandates? Biden wants to place blame for the COVID numbers on Republican governors, when he should be looking at Mayorkas and his own administration for releasing THOUSANDS of untested and unvaccinated Haitian illegals into the country, all because they have papers asking them to pinky-promise to show up to court.

This is a joke. This entire thing is a joke. Are you laughing? Biden is laughing. Mostly because he doesn’t remember why he’s laughing, but also because he is getting away with being a complete trainwreck disaster as president.